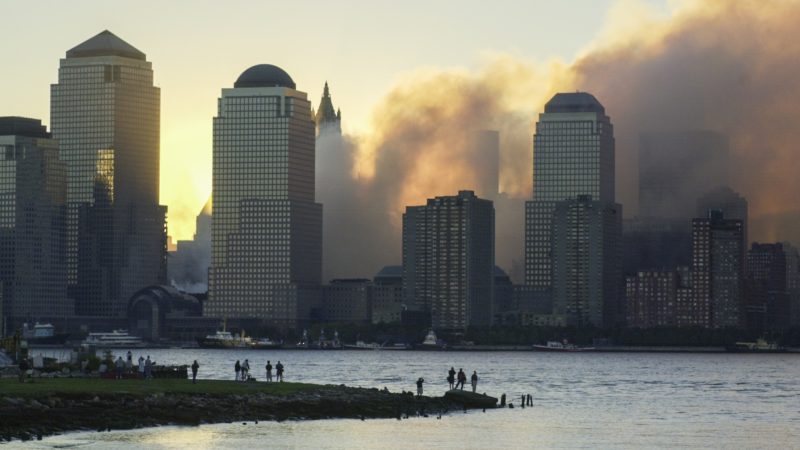 File photo. People watch as the sun rises over the destroyed remains of the World Trade Center in New York, New York, USA as seen from Liberty State Park in Liberty City, New Jersey, USA, on the morning of 12 September 2001. [EPA-EFE/TANNEN MAURY]

The FBI on Saturday (11 September) released a newly declassified document related to its investigation of the 9/11 2001 attacks on the United States and allegations of Saudi government support for the hijackers, following an executive order by President Joe Biden.

The partially redacted 16-page document released by the FBI on the 20th anniversary of the attacks detailed contacts between the hijackers and several Saudi officials, but it did not draw a definitive conclusion whether the government in Riyadh was complicit in the attacks, which killed nearly 3,000 people.

Earlier this month, Biden ordered the Department of Justice to review documents from the FBI’s probe into the attacks for declassification and release.

Relatives of the victims have been pushing for years for more information about what the FBI discovered in its probe and have contended that the documents would show Saudi Arabian authorities supported the plot.

Fifteen of the 19 hijackers were from Saudi Arabia.

The Kingdom has long said it had no role in the attacks. The Saudi embassy in Washington did not respond to a request for comment sent out of hours late on Saturday.

A US government commission in 2004 found no evidence that Saudi Arabia directly funded al Qaeda, the group given safe haven by the Taliban in Afghanistan at the time. It left open whether individual Saudi officials might have.

The families of roughly 2,500 of those killed in the attacks, and more than 20,000 people who suffered injuries, businesses and various insurers, have sued Saudi Arabia seeking billions of dollars.

In a statement issued on 8 September, the embassy said Saudi Arabia has always advocated for transparency around the events of 11 September 2001, and welcomes the release by the United States of classified documents relating to the attacks.

Statement by the #Saudi Embassy on the Release of Classified 9/11 Documents. https://t.co/9jMeA3y5hB pic.twitter.com/NPtJh0iJno

“As past investigations have revealed, including the 9/11 Commission and the release of the so-called ’28 Pages,’ no evidence has ever emerged to indicate that the Saudi government or its officials had previous knowledge of the terrorist attack or were in any way involved,” the embassy’s statement said.

In a statement on behalf of the organization 9/11 Families United, Terry Strada, whose husband Tom was killed on 9/11, said the document released by the FBI on Saturday put to bed any doubts about Saudi complicity in the attacks.

“Now the Saudis’ secrets are exposed and it is well past time for the Kingdom to own up to its officials’ roles in murdering thousands on American soil,” the statement said.

Biden has taken a tougher stance with Saudi Arabia than his predecessor Donald Trump, criticising the Kingdom over its human rights record while releasing a US intelligence report implicating the Kingdom’s de-facto ruler Crown Prince Mohammed Bin Salman in the 2018 killing of Saudi dissident journalist Jamal Khashoggi. The prince denies any involvement.