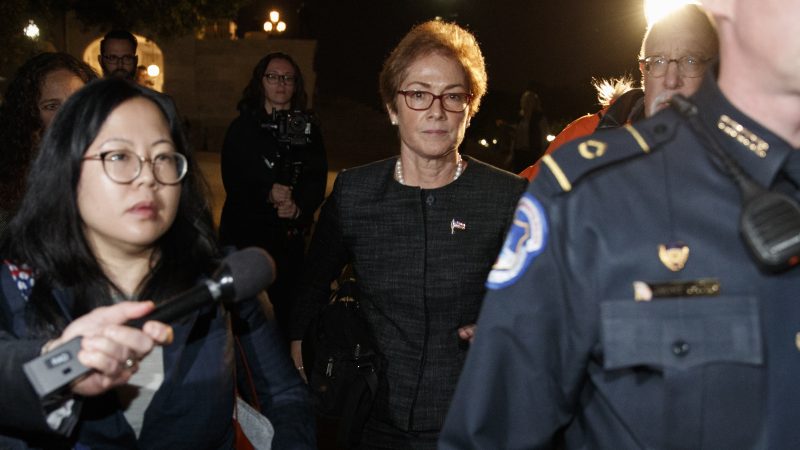 Witness transcripts in the impeachment probe into Donald Trump were made public for the first time Monday (4 November), with the former US ambassador to Kyiv telling investigators she felt threatened by the president in his call to Ukraine’s leader.

Democrats are entering an open phase of a congressional probe into potential abuse of power by Trump that has divided Washington as Republicans seek to defend him and his opponents pursue his removal from office.

The release of Marie Yovanovitch’s deposition came as the White House hardened its opposition to the inquiry, with Trump’s top national security lawyer defying a subpoena to testify early Monday.

The Yovanovich testimony in one summary exchange…. pic.twitter.com/tnFFCFvu3D

The probe is examining how Trump pressured Ukraine to investigate his Democratic rival Joe Biden, including by withholding $391 million in military aid that had been approved by Congress to help the US ally defend itself against Russian aggression.

Yovanovitch, who had urged Ukraine to do more to fight corruption, testified last month that she was ousted in May over “false claims” spread by questionable actors allied to Trump.

According to her deposition, she was alarmed by the deepening involvement of Trump’s personal lawyer Rudy Giuliani in Ukrainian affairs, and in particular his efforts to get Kyiv to investigate Biden.

Intriguing: Yovanovich said Parnas and Fruman were trying to install someone to replace her in Kyiv who would advocate for their business interests https://t.co/UNBrNcrJT0

She said she was “shocked” when she read the summary of Trump’s 25 July call with Ukrainian President Volodymyr Zelenskiy in which Trump said the ambassador was “going to go through some things.”

“I was very concerned. I still am,” Yovanovitch says.

“Did you feel threatened?” an investigator asks Yovanovitch in the transcript.

“I really don’t know her,” Trump told reporters of Yovanovitch on Monday, adding that he was “sure she’s a very fine woman.”

In fact, Yovanovitch came up repeatedly in Trump’s phone call with Zelenskiy, with the US president describing her as “bad news,” according to a White House summary of the conversation.

The release is the first of what House Intelligence Committee chairman Adam Schiff said would be several key depositions.

He also released testimony from Michael McKinley, a former senior advisor to Secretary of State Mike Pompeo who resigned in September after concluding that the department was not defending top diplomats.

He said he asked Pompeo three times to defend Yovanovitch, eventually telling him that “this situation isn’t acceptable.” But the secretary was essentially non-responsive.

In his 37 years as a diplomat he had “never seen” efforts to use the State Department and its missions “to procure negative political information for domestic purposes,” McKinley told investigators.

The depositions demonstrate “the contamination of US foreign policy by an irregular back channel that sought to advance the president’s personal and political interests, and the serious concerns that this activity elicited across our government,” Schiff and the chairs of two other panels leading the investigation said in a statement.

They were in text message chains in which diplomats expressed misgivings about the prospective quid pro quo of political investigations for military aid.

Prior to the release of the first transcripts, Trump sought to attack their credibility by suggesting, without evidence, that Schiff would “change the words that were said to suit the Dems’ purposes.”

Eisenberg is reported to have been on the 25 July call. But Trump said Monday there was “no reason” for witnesses to answer questions by investigators.

“This is just another Democrat Hoax that I have had to live with from the day I got elected,” the president said.

Robert Blair, an assistant to the president and senior advisor to the acting chief of staff, also refused to testify.

But Schiff said the White House instructed them not to appear, a clear signal that “their testimony would be further incriminating of the president.”