Refugees that arrive illegally on the Greek islands are now being sent back to Turkey. [Ann Wuyts/Flickr]

202 refugees were returned to Turkey aboard two boats. Among them were two Syrians that had recently crossed illegally into Greece.

According to a representative of Frontex, quoted in the Greek press, the majority of these migrants come from Bangladesh and Pakistan.

Sources close to the Greek government told EFE that the two Syrians on the boats had requested to be taken back to Turkey for “personal reasons”.

The boats held one police officer for every migrant being deported, with the contingent made up of both Frontex agents and Greek riot police.

Both transports left the Greek islands without any trouble, but Yorgos Kyritsis, a spokesperson from the refugee management centre, said the government was ready to deal with any violence that might erupt from the refugees when the transports begin in earnest.

Tensions were running high this weekend in the registration camps on the Greek islands and the improvised camps of Idomeni and the port of Pireas.

73 refugees arrived in Pireas on 2 April from the island of Samos and a further 25 the next day from Lesbos. 4,800 people are currently crammed into the makeshift camp in the Athenian port, some of which the Greek government hopes to send to other, better-organised camps.

The EU-Turkey agreement specified an increase in controls and patrols to block the refugee route to the islands of the eastern Aegean Sea. But it did not stop 1,400 people from reaching the Greek coast this weekend.

Under the agreement reached between Brussels and Ankara, all refugees that arrive illegally in Greece will now be sent back to Turkey. In exchange, the EU will accept the same number of Syrian refugees, who will be resettled through an agreed legal route.

The controversial plan to trade refugees with Turkey is finally off the ground, despite the criticisms of the United Nations High Commission for Refugees (UNHCR) and many NGOs, which allege that Ankara does not adequately protect refugees and even forcibly sends some of them back across its borders.

NGOs helping the Greek government cope with the refugee crisis have decided to cease operations for practical reasons, as well as in opposition to the “inhumane” EU-Turkey deal. EURACTIV Greece reports.

The Greek parliament on Friday (1 April) adopted a law reforming the procedures for asylum and the returning of refugees to “safe countries”. Due to a disagreement within the country’s governing Syriza party, Turkey was not included on this “safe” list.

Ankara must now also make the necessary legal changes to guarantee that it will not practice immediate deportations, which are forbidden under European and international law.

The mechanism the EU invoked for the first time last weekend was one devised under the EU-Turkey agreement. This “one in, one out” system consists of admitting one Syrian refugee by a legal channel for each Syrian deported back from Greece to Turkey. The objective is to clear the illegal routes into the EU’s territory.

So far, the European Commission has not specified which member states would be prepared to host these Syrians once they are transferred from Turkey.

This plan has attracted a great deal of criticism, which the Commission assured it was taking “very seriously” and working on measures to resolve.

On Friday (1 April) the UNHCR denounced the worsening state of the reception centres on the Greek islands where many of the refugees are being held, and warned that the situation could get out of control unless the European authorities acted as a matter of urgency.

On the island of Lesbos, for example, the Morio refugee center has a capacity of 2,000 but is currently hosting 2,300 people.

“People are sleeping outside and there is not enough food,” said Melissa Fleming, a spokesperson for the UNHCR.

The UN agency, and NGOs such as Doctors Without Borders (MSF), have chosen to take no part in the exchange of refugees, which they see as illegal and unfair, and have opposed the European policy of detaining asylum seekers against their will.

On the allegations concerning Turkey and its forced deportations, which are denied by Ankara, the EU executive has said it would make an assessment once it had completed its own verification of the facts.

Turkey has illegally returned thousands of Syrians to their war-torn homeland in recent months, highlighting the dangers for migrants sent back from Europe under a deal due to come into effect next week, Amnesty International said today (1 April).

A Commission spokesperson, said on 1 April that the deportation back to Syria of refugees with a right to asylum was a “red line that should not be crossed”. The European Commissioner for Migration and Home Affairs, Dimitris Avramopoulos, visited Ankara on Sunday (3 April) to discuss the application of the agreement on the ground and address the moral issues it has raised.

Brussels has recognised “some problems” with the implementation of the agreement and has said that all the parties are working together to resolve them.

But one of the factors that may undermine the successful functioning of the agreement is a lack of personnel in the Greek islands. 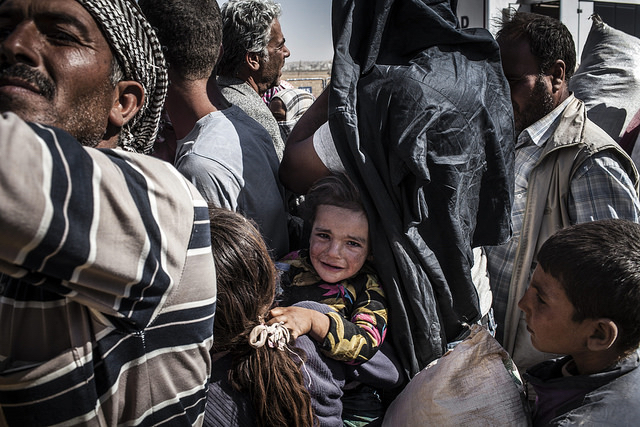 The EU, Greece and Turkey have to ensure that additional principles guide the implementation of the EU-Turkey migration deal reached at the 17-18 March summit, writes Nils Muižnieks.

EU member states have agreed to send 2,500 civil servants to support the work of the Greek authorities.

But so far, Frontex has only been promised 44 experts on readmission and 700 personnel for the deportation transports.

The European Asylum Support Office (EASO) expects to receive help from 452 experts promised by the member states, 32 of which were deployed on Monday 4 April.