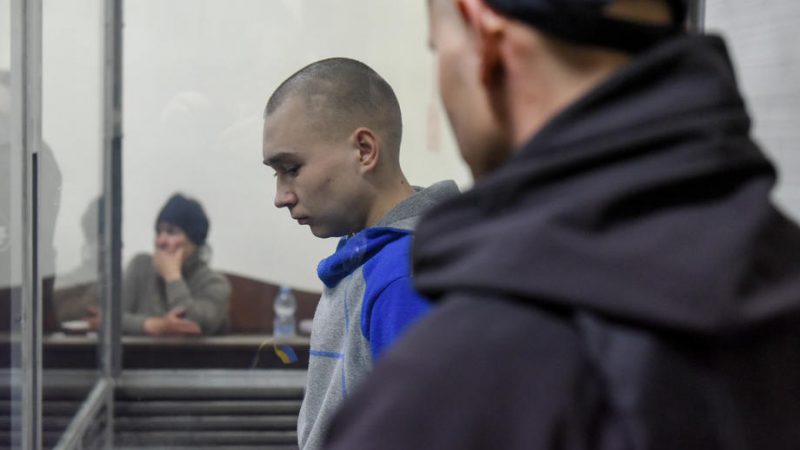 Russian serviceman Vadim Shishimarin attends a court hearing in the Solomyansky district court in Kyiv, Ukraine, 18 May 2022. Shishimarin is accused of killing an unarmed 62-year-old civilian man as Shishimarin fled with four other soldiers near Chupakha village in the Sumy area. [EPA-EFE/OLEG PETRASYUK]

In a trial that has huge symbolic importance for Kyiv, Shishimarin is charged with murdering a 62-year-old civilian in the northeast Ukrainian village of Chupakhivka on 28 February. If convicted, he faces up to life imprisonment.

Ukraine has accused Russia of atrocities and brutality against civilians during the invasion and said it has identified more than 10,000 possible war crimes.

Reportedly, Shishimarin’s case is the first under a war crimes accusation.

Russia has denied targeting civilians or involvement in war crimes and accused Kyiv of staging them to smear its forces.

Asked about the trial, Kremlin spokesman Dmitry Peskov told Reuters: “As before, there is no information (about the trial) and the ability (of Russia) to provide assistance is also limited due to the absence of our diplomatic mission.”

Asked more broadly about war crimes allegations against Russian forces in Ukraine, Peskov said: “We consider it impossible and unacceptable to throw such terms around. Many of the cases that Ukraine is talking about are obvious fakes, and the most egregious ones are staged, as has been convincingly proved by our experts.”

After guards led Shishimarin into the court in handcuffs, he was asked by the judge if he accepted the charge against him. He confirmed that he did.

Ukrainian state prosecutors have said Shishimarin and four other Russian servicemen fired at and stole a privately owned car to escape after their column was targeted by Ukrainian forces.

The Russian soldiers drove into the village of Chupakhivka where they saw an unarmed resident riding a bicycle and talking on his phone, they said.

They said Shishimarin was ordered by another serviceman to kill the civilian to prevent him reporting on the Russians’ presence and fired several shots through the open window of the car with an assault rifle at the civilian’s head. The civilian died on the spot.