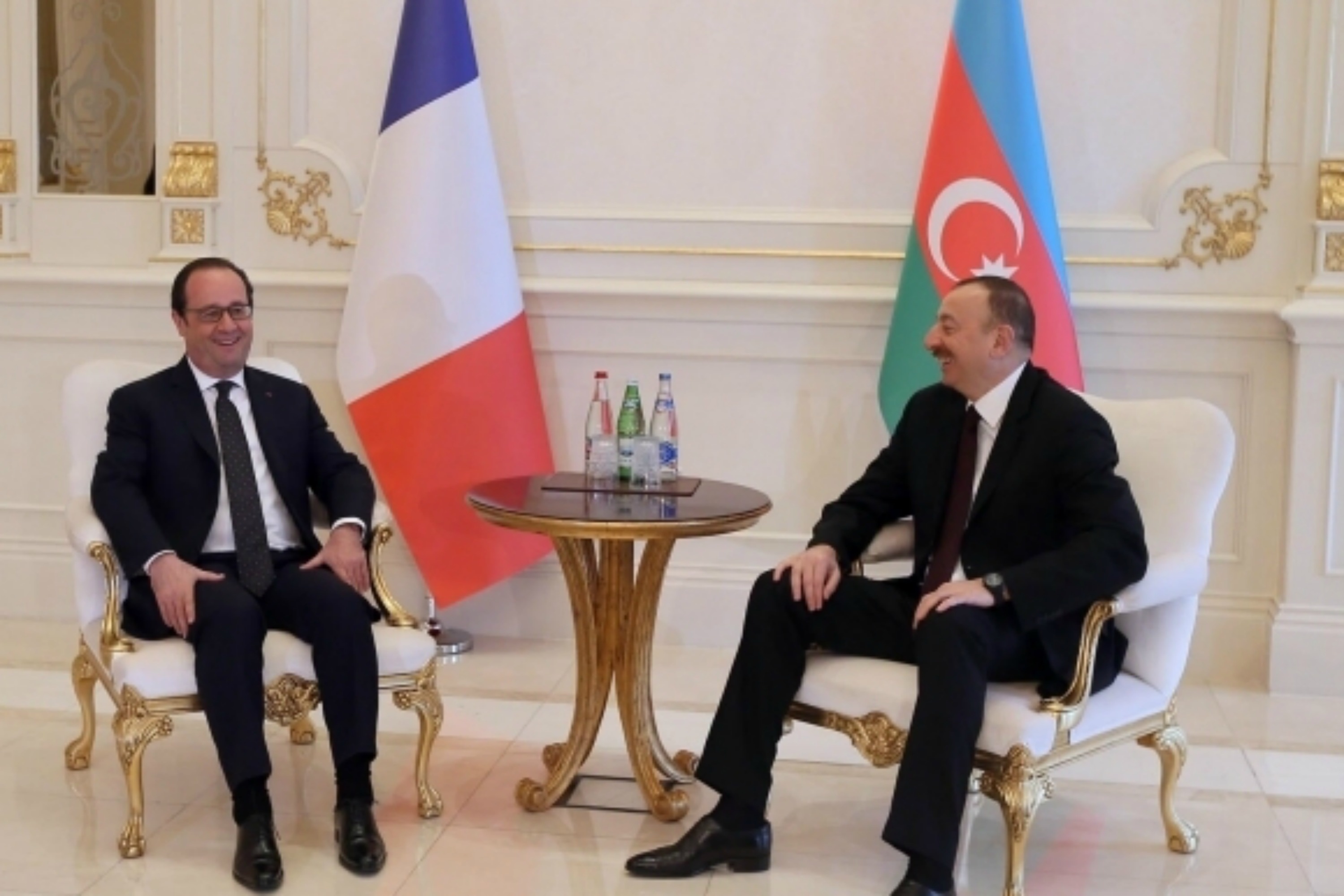 Hollande and Aliyev in Baku. [Elysée]

French President François Hollande has met with both the President of Armenia Serzh Sargsyan, and Ilham Aliyev, the President Azerbaijan, against the background of reports of renewed violence in Nagorno-Karabakh.

Hollande visited Armenia on the occasion of the 100th anniversary of the Armenian genocide on 24 April, and was in Azerbaijan on 25 April.

The official communiqués provided little information, but during the visit to Baku, the two sides exchanged views on the current state of the negotiations over the settlement of the Armenia-Azerbaijani Nagorno-Karabakh conflict (see background). Aliyev is reported to have expressed satisfaction with Hollande’s efforts to settle the conflict.

Indeed, on 27 October 2014, France hosted a summit attended by the Presidents of Armenia and Azerbaijan.

According to the French foreign ministry, at this meeting, an agreement was secured, to exchange data on persons missing during the conflict, which has already begun to be implemented. The meeting had also helped boost the momentum of negotiations within the Minsk Group on the basis of so-called Madrid principles: non-use of force, respect for territorial integrity of States and the right to self-determination.

“Mounting tensions that we have seen in recent months confirms the absolute necessity of enforcing them,” a French diplomat told EURACTIV France today.

Also on Monday, the Azerbaijani defense ministry reported that Armenian armed forces continue to violate the ceasefire with Azerbaijan.

Azerbaijani positions took fire from positions located near the villages of Goyarkh, in the Terter district, Kuropatkino in the Khojavend district, and Ashagi Seyidahmadli, in the Fizuli district.

Moreover, Azerbaijani positions took fire from the positions located in the Fizuli and Jabrayil districts.

The enemy was silenced with return fire, according to the communiqué of the Azeri defense ministry.

Bloomberg quoted an analyst of the Royal Bank of Scotland Group, who warned that an election due in Nagorno-Karabakh on 3 May was likely to trigger a wider confrontation.

Asked to comment, Commission Spokesperson Maja Kocijancic said the EU executive was aware of the incidents and the fact that both sides are regularly sustaining casualties.

‘The status quo is unsustainable’

Kocijancic recalled the EU position on the issue in favour of the peaceful settlement of conflicts in accordance with international law and through negotiations in relevant formats.

“Stability in the South Caucasus cannot be achieved without a lasting resolution of the Nagorno-Karabakh conflict. The status quo is unsustainable, a political solution is needed. Violence and tit-for-tat action on the ground, and confrontational rhetoric do not contribute to peace. The EU has consistently called on the sides to exercise restraint on action and in words. This would help creating an environment conducive to progress in the peace process facilitated by the Minsk Group,” Kocijancic said.