Donald Trump got more soybean exports to the EU to calm down farmers in the Midwest, while Germany breathed a sigh of relief that there will be no tariffs on cars, for the time-being at least, in an agreement brokered on Wednesday (25 July).

Meanwhile, France, which has repeatedly insisted the EU should not negotiate while Trump has a gun to Europe’s head, is not happy with the outcome.

The US-EU agreement to ease the trade dispute does not lift tariffs on steel and aluminium, which the Trump administration imposed on EU industries in June, although they will be reassessed.

“It is okay to go back to talks with the Americans on trade matters,” however, French Finance Minister Bruno Le Maire said, “a good trade negotiation can only take place on a clear basis and not under pressure”.

“France has always said that a trade war must be avoided,” Le Maire insisted but not at any cost. The finance chief has clearly stated the position of France and it seems that Juncker crossed several lines in his agreement with Trump.

France, Le Maire said, opposes the negotiation of a big trade agreement, “which limits we have seen with the TTIP”, adding that agriculture must remain off the table – parties agreed yesterday to increase soybean imports – and insisted that the EU should not compromise its high sanitary, food and environment standards in any way.

Le Maire also asked for more engagement on the US side as any deal “should be based on reciprocity”. The French minister argued that the US US public procurement sector “is largely closed today and should be part of the talks” too.

“We are also waiting for acts of goodwill on the American side, particularly with regard to the tariffs already hard on the steel and aluminium sectors,” which remain in place despite yesterday’s talks.

The Commission refused to clarify if Juncker has been in contact with French President Emmanuel Macron, with whom he spoke on the phone ahead of his visit to Washington DC, after the meeting with Trump.

Kurz, whose country holds the rotating presidency of the EU, praised the agreement. “It is a good thing that Juncker is working with Trump to strengthen the US-EU partnership and to promote free and fair trade. Export secures every second job,” he said.

German Economy Minister Peter Altmaier also congratulated the president of the EU executive for his work. “A breakthrough achieved that can avoid trade war & save millions of jobs! Great for global economy!” Altmaier tweeted.

The agreement, the Commission insisted, is a “good result” for the EU. Except for France, so far member states have indeed backed Juncker’s deal.

France is not alone in its discontent towards the agreement though. Members of the European Parliament are still sceptical about the deal reached on Wednesday, as tariffs on steel and aluminium remain in place.

Bernd Lange, German social democrat and chair of the Parliament’s international trade committee, regretted that there were no pledges to repeal those restrictions and that the agreement only delays the decision on cars. “The threat remains!” Lange complained.

ALDE chief Guy Verhofstadt agreed. The former Belgian prime minister welcomed the deal but warned, “let’s not be naive: we must keep Trump on message and get rid of the steel and aluminium tariffs.”

Welcome work of @JunckerEU & @MalmstromEU. Hopefully this will avoid further escalation but let’s not be naive: we must keep Trump on message and get rid of the steel & aluminum tariffs & find new common approach towards China to respect intl ruleshttps://t.co/Ey4GWsGajq

Lange pointed out that “concrete talks are better than no talks” but remained cautious about the possible outcome of a negotiation “under pressure”.

French Greens MEP Yannick Jadot went further and accused Juncker of exceeding his mandate, in order “to satisfy the ‘Trumpist’ delusions”, as he did not have the remit from member states to negotiate with the US.

But the leader of the European Peoples’ Party in the Parliament, which Juncker belongs to, Manfred Weber, praised the agreement. “This will secure jobs and growth as well in the EU as in the US. Good news from DC” Weber said on Twitter.

The deal worries consumers too

Although “in principle, tariff reductions are good for consumers, but they must not go hand in hand with a reduction in consumer rights,” said the Federation of German Consumer Organisations, in a statement retaken by their European partners of BEUC.

Neither consumers and environment protection nor workers’ rights are mentioned in the statement. 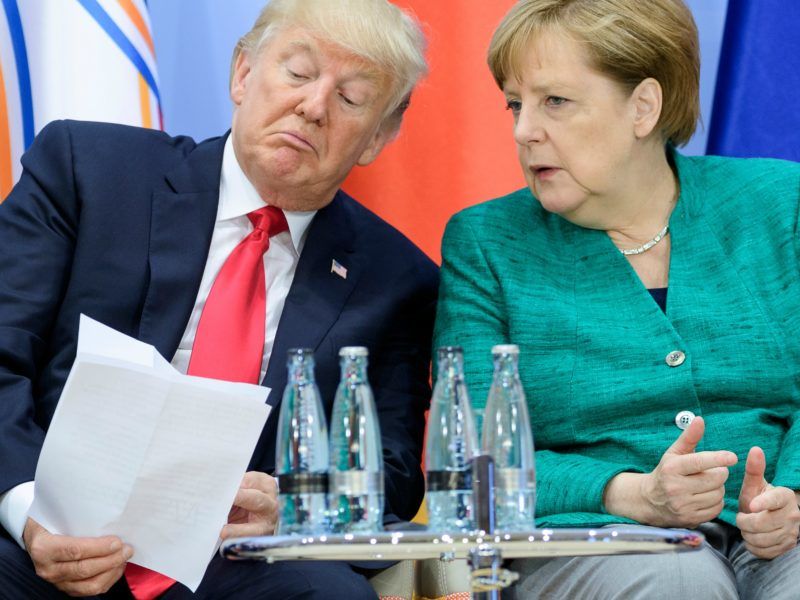 “At a time when the US cannot be seen as a close partner for a value-based trade policy, and US threats for new auto-tariffs are still off the table, the upcoming negotiations on a new trade agreement offer significant blackmail potential from the US,” consumers warned.

Business, on the other hand, are glad about the outcome of the negotiation. “Reason has prevailed. The agenda for talks between the EU and the US to de-escalate the current trade conflict is the right one,” said BusinessEurope President Pierre Gattaz.