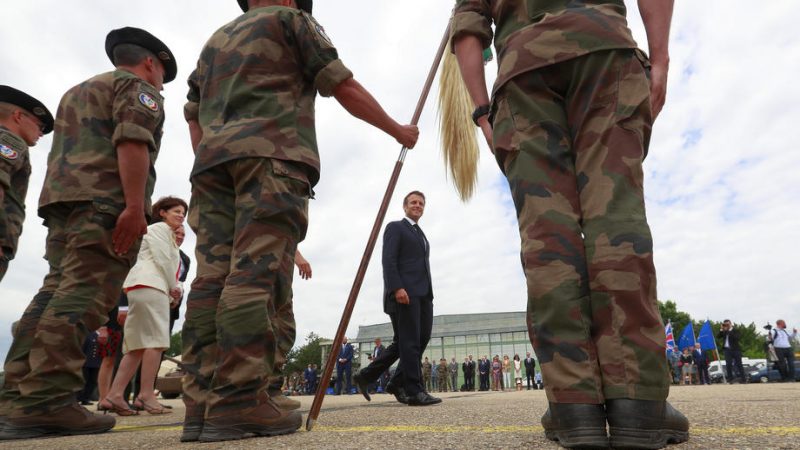 Belgian NATO troops stand in line while being reviewed by French President Emmanuel Macron at Mihail Kogalniceanu Air Base, near the city of Constanta, Romania, 15 June 2022. Macron paid a visit to the military airbase to meet troops stationed in Romania with the NATO Response Force as part of Mission 'Aigle' (Eagle). [EPA-EFE/ROBERT GHEMENT]

French President Emmanuel Macron said on Wednesday (15 June) that Ukraine would have to hold talks with Russia at some point, in order to try and bring an end to the war between the two countries.

“The Ukrainian President and his officials will have to negotiate with Russia,” said Macron, while on a visit to Romania.

Macron arrived in Romania on Tuesday for a three-day trip to NATO’s southern flank including Moldova before possibly heading to Kyiv on Thursday on a visit with German Chancellor Olaf Scholz and Italian Prime Minister Mario Draghi, two diplomatic sources said.

Macron has been criticised by Ukraine and eastern European allies for what they perceived as his ambiguous backing for Ukraine in the war against Russia.

The French President also called for “new in-depth discussions” with Ukraine, without confirming if he would travel this week to Kyiv.

“At the gates of our European Union, an unprecedented geopolitical situation is playing out,” he said after meeting French troops stationed in Romania.

“The political context and the decisions that the European Union and several nations will have to take justify new in-depth discussions and new progress.”

“We, the European Union, need to send clear political signals to Ukraine and the Ukrainian people, who have been resisting heroically for several months,” said Macron, speaking alongside Romanian President Klaus Iohannis.

He added the discussion should be “of a new nature”, including on military equipment, financing and unblocking shipments of Ukraine wheat affected by Russia’s invasion of its neighbour, which started in February.

Macron had dinner with French soldiers on the Mihail Kogalniceanu base near the Black Sea and decided to spend the night in a tent instead of a hotel, according to his Élysée office.

On Wednesday, he had breakfast with soldiers before meeting Iohannis for more than an hour.

Later Wednesday, Macron will travel to Moldova for talks with President Maia Sandu in the capital Chisinau.

Macron — who will be the first French president to visit Moldova since Jacques Chirac in 1998 — has met Sandu three times since February 2021 in Paris and has developed “a relationship of trust” with the pro-European president, according to the Élysée.

Macron will pledge France’s support “in the most direct way possible” to the former Soviet republic wedged between Romania and Ukraine.

Hundreds of thousands Ukrainians have crossed into Moldova, one of Europe’s poorest countries with a population of 2.6 million. Most have moved on to other countries.