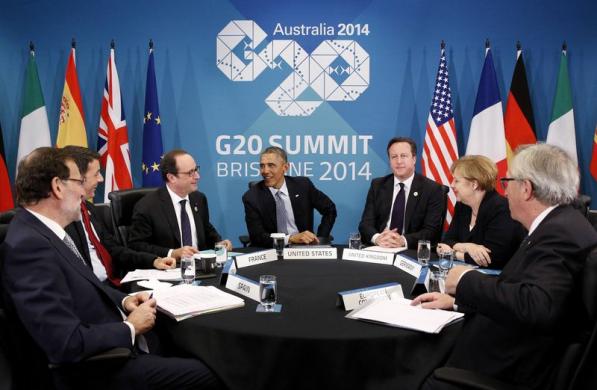 Leaders from the G20 group of nations agreed Sunday (16 November) to boost flagging global growth, tackle climate change and crack down on tax avoidance. But ties between the West and Russia plummeted to a new low over the crisis in Ukraine.

Russian President Vladimir Putin left the G20 summit in Brisbane early as US President Barack Obama accused Russia of invading Ukraine, and Britain warned of a “frozen conflict” in Europe.

Several Western nations warned Russia of further sanctions if it did not withdraw from Ukraine.

“I think President Putin can see he is at a crossroads,” said British Prime Minister David Cameron. “If he continues to destabilise Ukraine there will be further sanctions, further measures.

“There is a cost to sanctions, but there would be a far greater cost in allowing a frozen conflict on the continent of Europe to be created and maintained.”

“We would prefer a Russia that is fully integrated with the global economy,” he told a news conference.

“But we are also very firm on the need to uphold core international principles…. you don’t invade other countries or finance proxies and support them in ways that break up a country that has mechanisms for democratic elections.”

Before leaving the G20 Summit, Putin said a solution to the Ukraine crisis was possible, but did not elaborate.

“Today the situation (in Ukraine) in my view has good chances for resolution, no matter how strange it may sound,” Putin said. He skipped a working lunch at the summit to leave early, citing the long flight home and need for sleep.

Russia has denied any involvement in the conflict in Ukraine that has killed more than 4,000 people this year.

Security and climate change overshadowed G20 talks on boosting global economic growth at the summit, although the leaders did sign off on a package of measures to add an extra 2.1 percentage points to global growth over five years.

“This will add more than $2 trillion to the global economy and create millions of jobs,” said a communique issued at the end of the meeting, which also committed to tackle global tax avoidance denying government’s billions of dollars in revenue.

The United States and other nations overrode host Australia’s attempts to keep climate change off the formal agenda. Australia is one of the world’s biggest carbon emitters per capita.

The final communique called for strong and effective action to address climate change with the aim of adopting a protocol, with legal force, at a UN climate conference in Paris in 2015.

“The most difficult discussion was on climate change,” an EU official told reporters on condition of anonymity. “This was really trench warfare, this was really step by step by step. In the end we have references to most of the things we wanted.”

Obama put climate change squarely on the G20 agenda with a speech on Saturday calling on all nations to act, and committing $3 billion to the Green Climate Fund. Japan pledged $1.5 billion to the fund on Sunday.

World leaders also agreed to unite in the fight against Ebola, which Britain’s Cameron said was not only a humanitarian crisis but also a security threat.

“The best way we can keep out people safe from Ebola is by tackling it at source,” he said.

Sanctions against Russia aimed at sectors like oil and banking, as well as individuals close to Putin, are squeezing its economy at a time when falling oil prices are straining the budget and the rouble has plunged on financial markets.

“At this point the sanctions we have in place are biting plenty good,” Obama said after the summit. “We retain the capability, and we have our teams constantly looking at mechanisms in which to turn up additional pressure as necessary.”

Earlier in the day, Obama, Australian Prime Minister Tony Abbott and Japanese Prime Minister Shinzo Abe lined up together against Russia, vowing to oppose what they called Moscow’s efforts to destabilise eastern Ukraine.