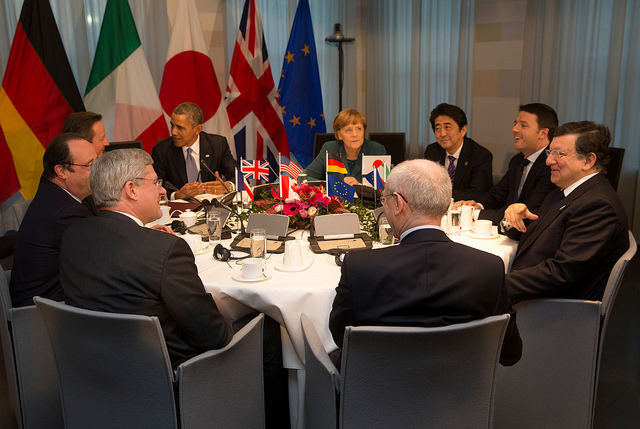 Leaders of the Group of Seven nations, who met on the sidelines of a nuclear security summit in The Hague yesterday (24 March), said they would convene again in Brussels in early June, instead of Sochi, in Russia, as planned.

The G7 leaders, meeting without Russia, agreed to hold their own summit this year instead of attending a planned G8 meeting in the Russian Olympic venue of Sochi, along the Black Sea coast from Crimea, and to suspend their participation in the G8, until Russia changes course.

This is the first time since Russia joined the G8 in 1998 that it will have been shut out of the annual summit of industrialised democracies.

On a day when Kiev ordered its remaining troops to withdraw from Crimea and Russian forces captured a Ukrainian marine base and a landing ship, leaders of the United States, Germany, France, Britain, Italy, Japan and Canada condemned what they called “Russia’s illegal attempt to annex Crimea in contravention of international law”.

Obama, who has imposed tougher sanctions on Moscow than European leaders over its takeover of the strategic Crimean peninsula, told reporters: “Europe and America are united in our support of the Ukrainian government and the Ukrainian people”.

“We’re united in imposing a cost on Russia for its actions so far,” he said of the visa bans and asset freezes slapped on senior Russian and Crimean officials.

Russian Foreign Minister Sergei Lavrov played down the G8 snub. “If our Western partners believe the format has exhausted itself, we don’t cling to this format. We don’t believe it will be a big problem if it doesn’t convene,” he told reporters.

G7 leaders agreed that their energy ministers would work together to reduce dependence on Russian oil and gas and increase energy security.

“We remain ready to intensify actions including coordinated sectoral sanctions that will have an increasingly significant impact on the Russian economy, if Russia continues to escalate this situation,” they said in a joint statement.

Western officials are now focused less on persuading Putin to relinquish Crimea – a goal that seems beyond reach – than on deterring him from seizing other parts of Ukraine, which was under Moscow’s control within the Soviet Union until its breakup in 1991.

Persuading Europeans to sign on to tougher sanctions could be difficult. The EU does 10 times as much trade with Russia as the United States and is the biggest customer for Russian oil and gas. The EU’s 28 members include countries with widely varying relationships to Moscow.

But German Chancellor Angela Merkel, the EU’s most powerful leader, has taken a tough line with Putin and supported EU moves to reduce the bloc’s long-term dependence on Russian energy.

Despite the disruption to East-West relations, Washington wants other diplomatic business with Moscow to continue. US Secretary of State John Kerry held talks with Lavrov after meeting the head of the Organisation for the Prohibition of Chemical Weapons, overseeing the destruction of Syria’s toxic stockpile in action sponsored jointly by Washington and Moscow.

Russia hit back symbolically at Canada, announcing personal sanctions against 13 Canadian officials in retaliation for Ottawa’s role in Western sanctions so far. Moscow has already taken similar measures against senior US Congress members but has not yet targeted European officials.