G7 warns Russia of ‘massive consequences’ if Ukraine is attacked 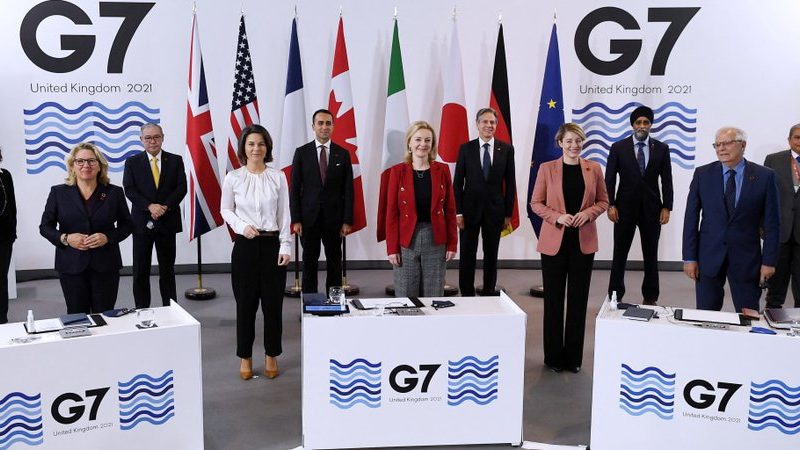 Family photo from the G7 ministerial in Liverpool. [Handout photo]

US intelligence assesses that Russia could be planning a multi-front offensive on Ukraine as early as next year, involving up to 175,000 troops.

The Kremlin denies it plans to invade and says the West is gripped by Russophobia. Moscow says the expansion of NATO threatens Russia and has contravened assurances given to it as the Soviet Union collapsed in 1991.

At a meeting in the northern English city of Liverpool, the G7 delegates said they were united in their condemnation of Russia’s military build-up near Ukraine and they called on Moscow to de-escalate.

“Russia should be in no doubt that further military aggression against Ukraine would have massive consequences and severe cost in response,” the statement says.

“We reaffirm our unwavering commitment to Ukraine’s sovereignty and territorial integrity, as well as the right of any sovereign state to determine its own future.”

🇬🇧🌎 The #G7 are united in condemning Russia's military build-up and aggressive rhetoric towards Ukraine. We stand for freedom and democracy and are clear that any military incursion would have massive consequences for which there would be a severe cost👇 https://t.co/dfT0h0vVZB

The G7 comprises Britain, Canada, France, Germany, Italy, Japan and the United States, as well as a representative from the European Union.

A statement released by the Russian Embassy in London on Saturday evening, before the joint G7 document was reported, said that Britain’s frequent use of the phrase “Russian aggression” during the Liverpool meeting was misleading and designed to create a cause for the G7 to rally round.

“Russia has made numerous offers to NATO on ways to decrease tensions. The G7 forum could be an opportunity to discuss them, but so far we hear nothing but aggressive slogans,” the embassy statement said.

For Moscow, the growing NATO embrace of a neighbouring former Soviet republic – and what it sees as the nightmare possibility of alliance missiles in Ukraine targeted against Russia – is a “red line” it will not allow to be crossed.

Putin has demanded legally binding security guarantees that NATO will not expand further east or place its weapons close to Russian territory; Washington has repeatedly said no country can veto Ukraine’s NATO hopes.

In 2014 Russia seized the Black Sea peninsula of Crimea from Ukraine, prompting the West to impose sanctions on Russia.

The Kremlin on Sunday said that Putin told US President Joe Biden that Russian troops posed no threat and that Moscow was being demonised for moving troops around its own territory. Putin and Biden have agreed to hold more talks, Moscow said.

US Secretary of State Antony Blinken said Russia could not exert its sphere of influence over Ukraine.

“That’s what Russia is purporting to assert and if we let that go with impunity, then the entire system that provides for stability, prevents war from breaking out, is in danger,” he told NBC News in a post-summit interview on Sunday.

The Russian mission to the EU circulated on Sunday a statement clarifying Moscow’s positions on dialogue with the US and other Western countries regarding security guarantees.

In particular, Russia reminds that the West has committed to refrain from militarizing countries in its neighbourhood.

Russia quotes the Charter of Paris for a New Europe of 1990: “Security is indivisible and the security of every participating State is inseparably linked to that of all the others”, and the Charter for European Security, adopted at the 1999 OSCE Istanbul summit, stipulating that the participating states “will not strengthen their security at the expense of the security of other states.”

Russia insists for a response from NATO on its proposal for withdrawal of regions for operative military exercises to an agreed distance from Russia-NATO contact line, coordination of the closest approach point of combat ships and aircraft to prevent dangerous military activities, primarily in the Baltic and Black Sea regions, as well as renewal of regular dialogue between the defence ministries in the Russia-US and Russia-NATO formats.