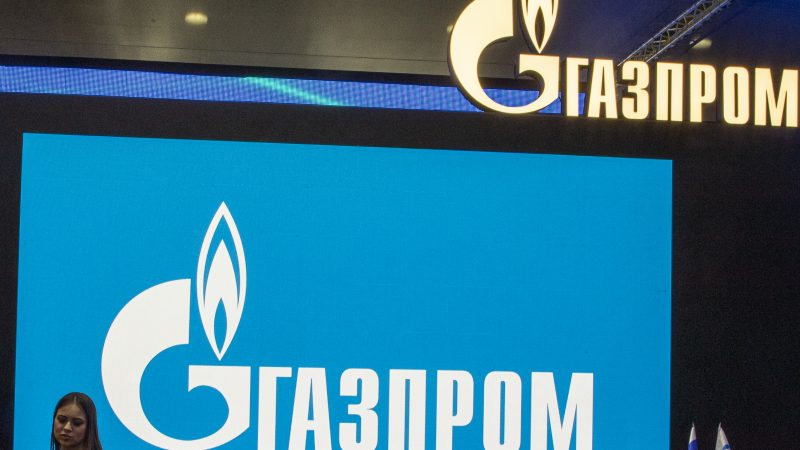 File photo. A worker sits in front of the logos of Russian gas company Gazprom during the 20th International Exhibition for Equipment and Technologies for the Oil and Gas Industries 'Neftegaz' in Moscow, Russia, 26 April 2021. [EPA-EFE/SERGEI ILNITSKY]

Germany would face a sharp recession if gas supplies from Russia are suddenly cut off, the country’s leading economic institutes said on Wednesday, and the government said the war in Ukraine poses “substantial risks” for Europe’s largest economy.

A sudden stop in Russian energy supplies – an adverse scenario and not the institutes’ baseline expectation – would slow economic growth to 1.9% this year and result in a contraction of 2.2% in 2023, they said.

The chairmen of three German parliamentarian committees called on Tuesday (12 April) for the European Union to impose an embargo on Russian oil as soon as possible. But a survey published on Wednesday showed most Germans baulk at that idea.

“If gas supplies were to be cut off, the German economy would undergo a sharp recession,” said Stefan Kooths, vice president and research director business cycles and growth at the Kiel Institute for the World Economy.

The cumulative loss of gross domestic product (GDP) in 2022 and 2023 in the event of a such supply freeze would likely be around €220 billion, or more than 6.5% of annual economic output, the five institutes said.

In its monthly report, Germany’s Economy Ministry said the war in Ukraine “poses substantial risks” for the economy, but it was hard to quantify effects: “They depend heavily on the duration and intensity of the war,” it said.

The economic institutes – the RWI in Essen, the DIW in Berlin, the Ifo in Munich, the IfW in Kiel and Halle’s IWH – confirmed revised forecasts reported by Reuters on Tuesday, cutting their baseline 2022 growth projection for the economy to 2.7% from 4.8% and forecasting 2023 growth of 3.1%.

The Economy Ministry said that in coming months the inflation rate driven by energy prices and the uncertainty caused by the Russian intervention in Ukraine are likely to weigh on private consumption.

Trade flows and supply chains have been affected by the war, it said, adding: “Uncertainty about future economic developments remains correspondingly high.”