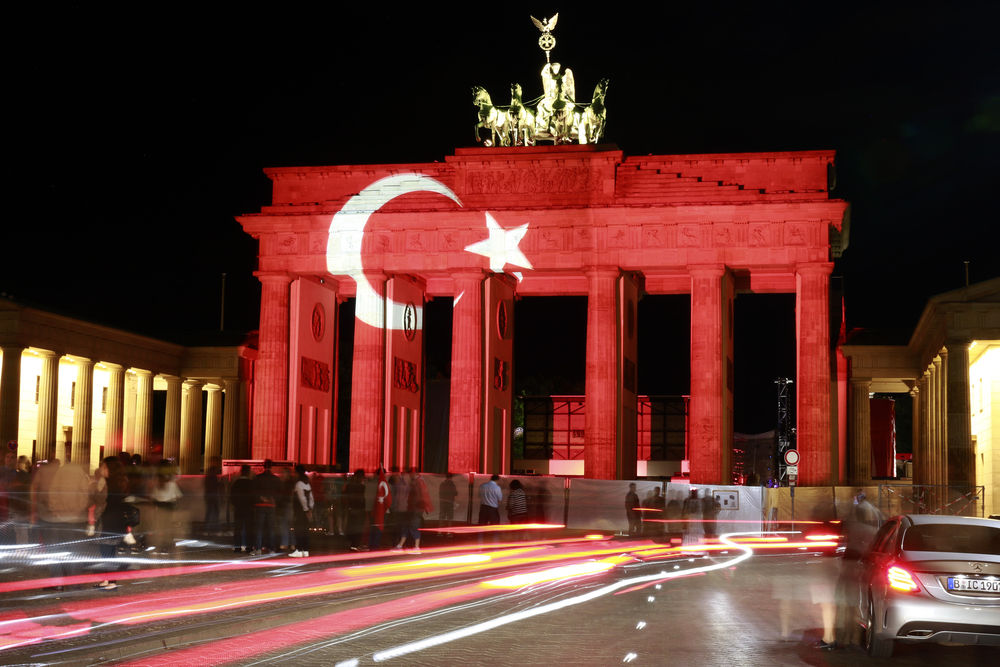 Berlin's Brandenburg Gate was lit up in the colours of the Turkish flag last summer following terrorist attacks in Ankara. [360b/ Shutterstock]

37 of the 630 members of the German parliament came to Germany as immigrants or are at least the children of people that did.

German Green Party politician Özcan Mutlu has succeeded in getting 20 of those to tell their stories, which he has compiled in his new book Politics without borders: Migration stories from the German Bundestag.

Mutlu’s own immigrant tale is an intriguing one as well. In his first year of school, he found himself sharing a classroom with mostly Turkish children, to such an extent that he felt like he was back in his village in eastern Turkey.

He later went on to qualify as an electrical engineer, an achievement he says he owes to “a dedicated teacher”. Party colleague Cem Özdemir, who will lead the Greens in the upcoming election, wasn’t so fortunate, calling his experience of the German school system disappointing.

The fact that Mutlu’s parents got to see their son take his seat in the Bundestag in 2013 was a great source of pride for the Greens politician and it may have provided comfort when he, as well as other MPs of Turkish origin, received messages of hate and death threats from extreme rightwing Germans, as well as fellow Turks.

The latter came about when the Bundestag voted to recognise the mass murder of Armenians in the early 20th century as a genocide. The so-called Armenian Resolution was strongly denounced by Ankara.

Members of the Bundestag of Turkish origin, whether they be Greens, SPD (Social Democratic Party), CDU (Christian Democratic Union), etc., have all reported that their experiences of discrimination have made them the men and women they are today.

Mutlu writes though that “When it comes down to it, I’m still ‘the Turk’.”

His colleague, Ekin Deligöz, said that despite attending school, earning a degree in administrative studies and gaining German citizenship in 1997, she “always feels like I have to prove myself”. The SPD’s Cansel Kiziltepe added that holding public office with a Turkish-sounding name brings with it its own set of challenges.

The Christian Social Union’s (CSU) Alexander Radwan, whose father is from Egypt, said that he had not experienced discrimination himself but that he has had to “regrettably witness it on several occasions”.

There are a number of Bundestag representatives whose names do not immediately reveal their immigrant background. For example, the SPD’s Swen Schulz has a Spanish mother and the CDU’s Kai Whittaker has a British father. He has that in common with his party’s general secretary, Katarina Barley.

Moreover, the CDU’s Gitta Connemann has Dutch roots, and the SPD’s Niels Annen and Daniela DeRidder are of Belgian extraction.

All of these stories combine to weave the rich tapestry that is Germany’s past and present immigration story.