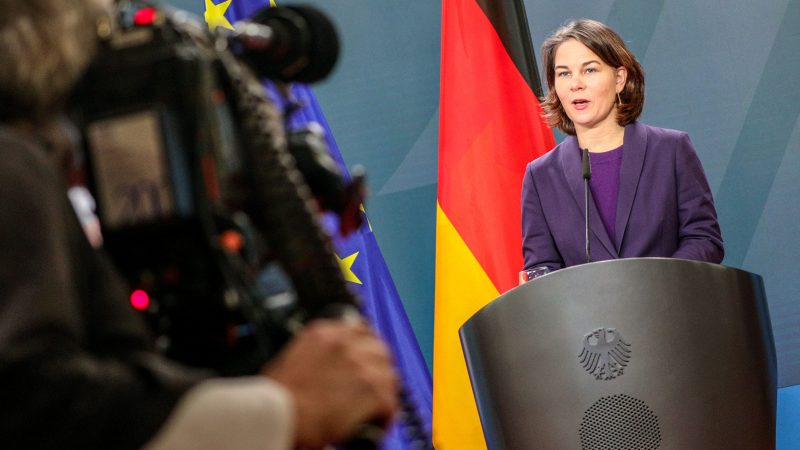 The United States and Germany appear to have agreed that the Russia-favoured Nord Stream 2 gas pipeline will not come to life if Russia invades Ukraine, according to statements from the two countries’ officials.

The first indication came from the US State Department, which said that Nord Stream 2, linking Russia to Germany under the Baltic Sea, will not move forward if Russia invades Ukraine, in a significant strengthening of the West’s previous position on the strategically vital gas supply.

“I want to be very clear: if Russia invades Ukraine one way or another, Nord Stream 2 will not move forward,” State Department spokesperson Ned Price stated on Wednesday (26 January). “I’m not going to get into the specifics. We will work with Germany to ensure it does not move forward.”

On the same day, Germany’s Foreign Minister Annalena Baerbock appeared to carry the same message to the Bundestag.

“In the case of a new act of aggression, we have a broad bandwidth of responses at our disposal, including Nord Stream 2,” she told MPs.

Emily Haber, Germany’s ambassador to Washington, appeared to confirm the hardening of her country’s position in comments on Thursday. She wrote on Twitter that “the US and Germany jointly declared last summer: if Russia uses energy as a weapon or if there is another violation of Ukraine’s sovereignty, Russia will have to pay a high price.”

The US and Germany jointly declared last summer: if Russia uses energy as a weapon or if there is another violation of Ukraine’s sovereignty, Russia will have to pay a high price.@OlafScholz and @ABaerbock stated clearly: nothing will be off the table, including Nord Stream 2.

The construction on the pipeline, intended to bypass Ukraine, was completed in September but it then lay idle while awaiting regulatory approval from Berlin and Brussels.

The project has become increasingly politicised amid growing tensions between Russia and the West, which fears Moscow may attack Ukraine to prevent it from forging close ties with NATO. Russia denies it harbours such plans.

From the perspective of Kyiv, Nord Stream 2 will allow Russia to stop transiting gas via Ukraine, which has served as an insurance policy against militaristic advances on its soil.

The CEO of Ukraine’s Naftogaz, Yuriy Vitrenko, told CNN on Tuesday that the new German government had an important choice to make – “to decide if they are with the free world or if they will collaborate with Putin”.

“They should prevent Nord Stream 2 and Gazprom from being above the rules,” he added.

“They are using gas as a weapon as we speak"

“#Putin's plan was to build #NordStream2, move all the transit flows from #Ukraine to Nord Stream 2, then it'll be easier for Russia to further invade Ukraine" pic.twitter.com/H2wHfPGjWe

Vitrenko, who has personally sat in negotiations with Russian President Vladimir Putin, said the Russian leader’s plan was to build Nord Stream 2 so it would be “easier to invade Ukraine”.

Another Ukrainian official, Sergiy Makogon, chief of the Gas Transmission Operator of Ukraine (GTSOU), told Die Welt that if Nord Stream 2 gets certified and starts operations, gas prices for Europeans will increase.

“Germany’s biggest mistake is to take the Ukrainian pipeline system for granted. As soon as Nord Stream 2 is in operation, the Ukrainian network will no longer be needed. Gazprom will control every access, and then prices will rise, also for Germany,” Makogon said.

Ukraine keeps telling its European partners that its gas transition system is not only reliable and flexible, but possesses Europe’s biggest gas reserves, which have proved to be of utmost importance in situations of price volatility.

Conversely, Russia’s narrative is that Ukraine’s ageing pipes could “burst at any time”.