German Chancellor Angela Merkel (R) and French President Emmanuel Macron, who is tuning in from Paris via video link, speak to the media following talks, in Berlin, Germany, 5 February 2021. [Pool/EPA/EFE]

Germany is sticking with its support for the Nord Stream 2 pipeline “for the time being”, Chancellor Angela Merkel said on Friday (5 February) after condemning Russia’s expulsion of diplomats from Sweden, Germany and Poland. 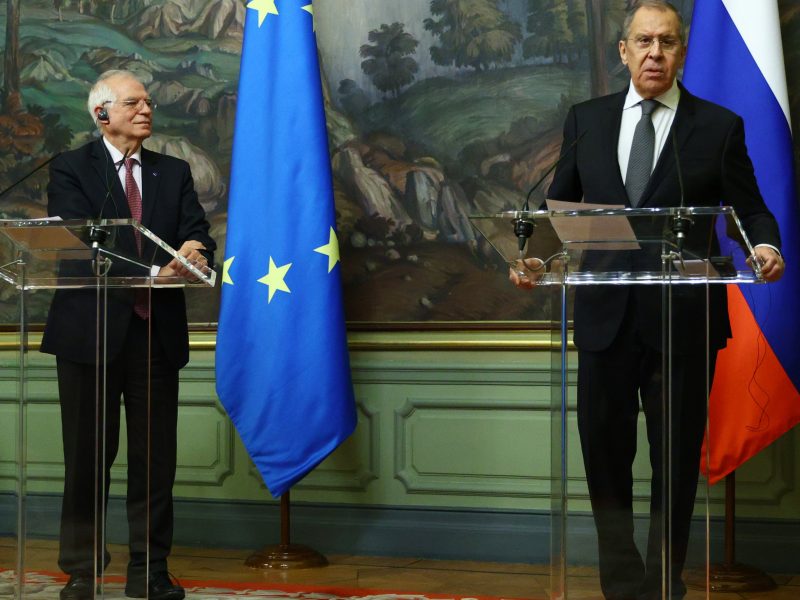 Merkel condemned the expulsions as “unjustified” and a further step by Moscow away from the rule of law.

A German government official said the Foreign Ministry had summoned the Russian ambassador “for an urgent meeting and made the German position very clear to him.”

After talks with French President Emmanuel Macron, Merkel told reporters: “In connection with the events in Russia, we have already said that we reserve the right to continue sanctions, especially against individuals.”

“The position on Nord Stream 2 is not affected by this for the time being; this is a project on which you know the position of the federal government,” Merkel said.

It was a “diplomatic duty” to keep open channels of communication with Europe’s giant eastern neighbour, she added.

Germany’s position is that Nord Stream 2 is a commercial project. However, Merkel expanded on her description of the pipeline, which she said she discussed openly with Macron.

“On the one hand, this is a commercial project, on the other hand, it has political implications and plays a big role in the transatlantic area,” Merkel said.

Washington has long argued the pipeline will increase Russian leverage over Europe. New US President Joe Biden believes it is a “bad deal for Europe”.

The poisoning and jailing of Navalny has thrust Nord Stream 2 up Germany’s political agenda, creating a serious problem for Merkel’s successor following the country’s September election.

Macron said he “very strongly” condemned Moscow’s behaviour towards Navalny from his poisoning to his arrest and to the expulsion of foreign diplomats.

On Nord Stream 2, he said: “We have set a European course and I will stick to it. Nothing can be done without close Franco-German cooperation. We want to implement a more sovereign energy transition and a more demanding discussion with Russia”.

The $11 billion pipeline, which is 90% complete, would double the capacity of the existing Nord Stream line to deliver gas from Russia to Europe via Germany under the Baltic Sea.