Germany bumped up to ‘best nation’, exceeding US in global ranking 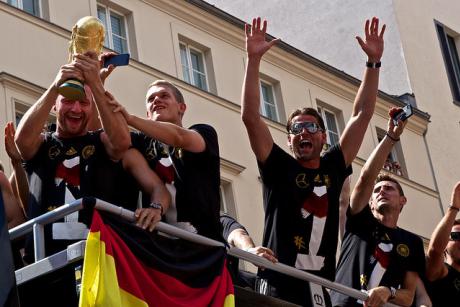 First world champion in football, now best image: in a global comparison, Germany was bumped to best nation status – not least because of its top performance in sports – while Russia suffered the largest demotion. EURACTIV Germany reports.

For the first time since 2009, the United States did not win first place in a contest, conducted by the largest German market research institute GfK, over national image.

Instead, Germany topped the list among 49 developed and newly-industrialised countries in a worldwide comparison.

The Nation Brands IndexSM (NBISM) measured worldwide perceptions of every country based on 23 different factors. These were combined into 6 categories, which were used to determine the national image: exports, government, culture, population, tourism and immigration/investment.

For this year’s study, a total of 20,125 interviews were conducted in 20 countries.

Germany gained the largest amount of points in the study’s results, with the authors indicating the FIFA World Cup championship as the driving force behind this spike.

No other country saw increases in any one sub-category as high as that of Germany in “sport excellence”.

“Germany appears to have benefited not only from the sports prowess it displayed on the world stage at the FIFA World Cup championship, but also by solidifying its perceived leadership in Europe through a robust economy and steady political stewardship,” said Simon Anholt, an independent policy advisor who developed the study.

“Germany’s score gains in the areas of ‘honest and competent government’, ‘investment climate’, and ‘social equality’ are among the largest it achieved across all the aspects covered by [this year’s] survey,” Anholt indicated.

In contrast, the USA showed the least impressive gain among the developed nations. While it is still seen as superior in several areas, including creativity, contemporary culture, and educational institutions, its role in global peace and security only ranks 19th out of 50 nations.

In the overall ranking, the 3rd to the 10th places remained unchanged compared to the previous year. Germany and the United States were followed by the United Kingdom, France, Canada, Japan, Italy, Switzerland, Australia and Sweden.

“In a year of various international confrontations, the United States has lost significant ground where tension has been felt the most acutely,” said Xiaoyan Zhao, Senior Vice President and Director of NBISM at GfK.

“Both Russia and Egypt have downgraded the U.S. in an unprecedented manner, particularly in their perception of American commitment to global peace and security, and in their assessment of the competence of the US government. However, on a global level, it is Russia that has received the strongest criticism from public opinion,” Zhao pointed out.

In previous years, Russia had shown upward momentum. This year’s edition of the study, however, shows Russia standing out as the only nation out of 50 to suffer a significant drop.  Russia’s largest decline is registered on the governance dimension, especially for the attribute of its perceived role in international peace and security. This is the most drastic score drop seen for any single attribute across the 50 nations. Overall, the latest study shows Russia slipped three places to 25th in 2014, overtaken by Argentina, China, and Singapore.

“International diplomacy clearly reaches beyond the realm of public opinion – however, policy makers need to be keenly aware that the way in which a country is perceived globally can make a critical difference to the success of its business, trade and tourism efforts, as well as its diplomatic and cultural relations with other nations,” Zhao explained.

“As our partner Simon Anholt often says, the only superpower left in today’s world is global public opinion.”

25 years after the fall of the Berlin Wall, Europe’s foreign policy situation is difficult, said Federica Mogherini. In a recent visit to Berlin, the EU's newly appointed High Representative committed to close cooperation with German Foreign Minister Frank-Walter Steinmeier, and announced EU plans to discuss stricter sanctions against Russia in the near future.