The Global Europe Brief is EURACTIV's weekly update on the EU from the global perspective.

Welcome to EURACTIV’s Global Europe Brief, your weekly update on the EU in the global perspective.

That the EU can’t meet its level of ambition comes at no surprise to experts, they believe the EU is not doing enough to address major shortfalls.

Speaking to EURACTIV, European Defence Agency chief Jiří Šedivý said “this is yet another wake-up call,” and added that “like with any big crisis in the EU, this, in the end, will galvanise us towards more cooperation, also in defence.”

According to him, next year will be crucial for merging all tools and processes and “the EU’s future Strategic Compass will make sure member states really meet their commitments and invest more together in a collaborative manner in defence.”

With the new strategy document, the EU aims to draw up a military doctrine by 2022 and define future threats and ambition, amid a growing debate over whether Europe should aim to enhance its military might independently from the US.

“Even under the new US administration, which will still be focusing more and more inevitably towards the Asia-Pacific region, it will be expected from us to be more autonomous, be stronger, and therefore more credible in NATO,” Šedivý said, echoing what EU officials have been repeating for a long time.

Read the full interview below: 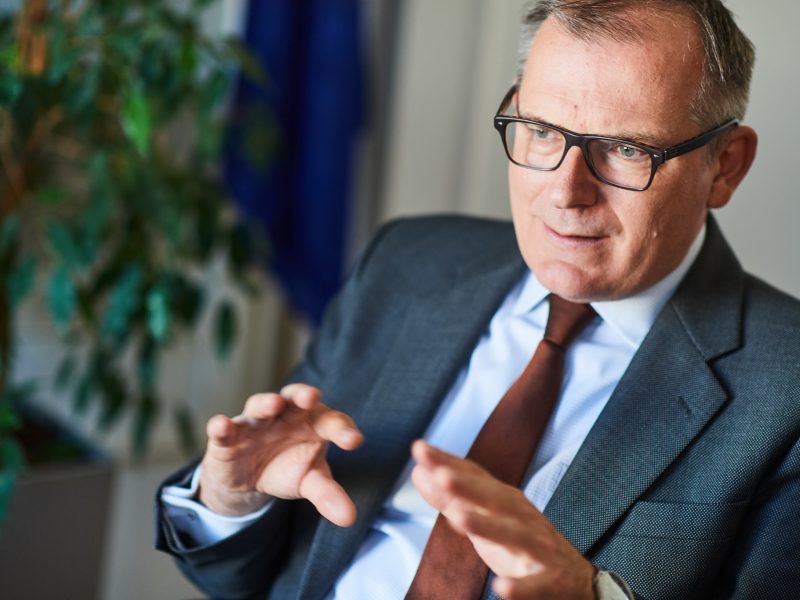 With the pressure in the EU’s strategic environment mounting, the bloc should not miss the opportunity of starting to use all the tools at hand to increase its defence cooperation, Jiří Šedivý, chief executive of the European Defence Agency (EDA) …

DIVERSION TACTICS? Turkey prevented German forces belonging to an EU military mission from carrying out a full search of a Turkish cargo ship that they suspected of taking weapons to Libya, both countries confirmed earlier this week.

Turkish President Recep Tayyip Erdoğan will step back from his aggressive stance toward Europe “at the first sign of EU unity”, a source in Brussels told EURACTIV this week. Erdoğan’s tactics would aim to either test waters or lead toward full confrontation with Europe.

France is leading a push for EU sanctions on Turkey at the December summit, to follow through on a threat made by the bloc in October, but has yet to win support from all EU governments, officials and diplomats said.

TIGRAY CONFLICT. Ethiopia has been “alarmed and surprised” by the EU’s equivocal stance on the conflict between Prime Minister Abiy Ahmed’s government and the rebel leaders of the Tigray People’s Liberation Front (TPLF), the country’s EU ambassador has told EURACTIV.

MERCOSUR DEAL. The challenging procedure of ratifying the EU-Mercosur deal is being held up due to a combination of the COVID-19 health crisis and considerable criticism from member states. The European Commission is now translating the agreement into all official EU languages and is expected to forward it to the Council in the coming months.

G20 GOES VIRAL. European Council President Charles Michel called on G20 leaders ahead of their recent summit to create “a new model of sustainable finance” to avoid sovereign defaults in the wake of the COVID-19 crisis. During the meeting, G20 nations emphasised the need for global access to COVID-19 vaccines.

FAR-RIGHT TERROR. Global deaths from terrorism have fallen for a fifth consecutive year, according to the 2020 Global Terrorism Index, but far-right attacks have increased by 250% globally, to a level not seen in the last 50 years, with the pandemic likely to exacerbate the trend.

FOREIGN ARMING. Ireland said it will not fund the provision of weapons to foreign military forces under the European Peace Facility, the country’s defence minister has said. The “off-budget” €5 billion would fund EU military operations and maintain a contingency fund for emergency defence force deployments.

HELICOPTER DEAL. Five European nations have signed a letter of intent to develop a medium multi-role helicopter as part of their efforts to modernise existing rotorcraft fleets under a NATO project. France, Germany, Greece, Italy and the UK aims to deliver a next-generation rotorcraft as a potential replacement of existing capabilities by leveraging the latest technology, production methods and operational concepts.

MILITARY MEDICINE. Spain has offered to host an EU military medicine congress to share lessons learned from the COVID-19 pandemic and “propose a military health link at the European level.”

SEA SURVEY SATELLITES. A European-built satellite designed to precisely measure sea levels successfully made it into orbit, helping the EU’s Copernicus fleet of eyes-in-the-sky grow in size and provide a fresh set of climate-relevant data.

WAR AND PEACE. In recent European history, it is difficult to find a political experiment that has flopped as spectacularly and as silently as the Dayton Peace Accord, write EURACTIV’ seditor-in-chief Zoran Radosavljevic and EURACTIV Croatia’s Zeljko Trkanjec on the 25th anniversary of the agreement.

ANTI-HATE ROADMAP. North Macedonia’s government should come up with a roadmap for recognising common history, rewriting textbooks and fighting hate speech against Bulgaria, the country’s Deputy Prime Minister Krassimir Karakachanov said, commenting on a landmark interview given by North Macedonian PM Zoran Zaev. It is the latest episode in a spat over conditions for unblocking Skopje’s EU path.

KAZAKH ELECTIONS. Kazakhstan is to hold parliamentary elections for the Majilis, the lower chamber of parliament, on 10 January 2021. Despite the COVID-19 pandemic, the Central Asian country is inviting observers and journalists and is hoping to attract international attention. The elections are a clear improvement in terms of representation and legislative changes, Samuel Doveri Vesterbye, managing director at the European Neighbourhood Council, told EURACTIV.

GREEN COOPERATION. Over the course of the last two months, China has made an emissions-busting pledge, while Joe Biden’s victory in the US presidential race is likely to shift Washington’s climate policy. Experts, however, reject the notion that climate diplomacy between Brussels and Beijing is on the right path.

CEASEFIRE EFFORT. Turkish President Recep Tayyip Erdoğan said he and Russian counterpart Vladimir Putin had discussed the possibility of involving other countries in efforts to maintain a ceasefire in Nagorno-Karabakh.

FOREIGN POLICY TEAM. US President-elect Joe Biden introduced a slate of veteran diplomats and policy-makers who will make up his national security and foreign policy team, saying: “America is back, ready to lead the world.”

HOPES UP. The recent US election has left many Germans concerned for the state of the country’s democracy, according to a new poll. In spite of this, Germany remains hopeful President-elect Joe Biden will stabilise the relationship and still views Washington as an important partner in foreign policy.

Europe’s everyday business has gone back into lockdown reality, until further notice. We’ll keep you updated on all relevant EU foreign affairs news, as we face a busy finish of this troubled 2020.