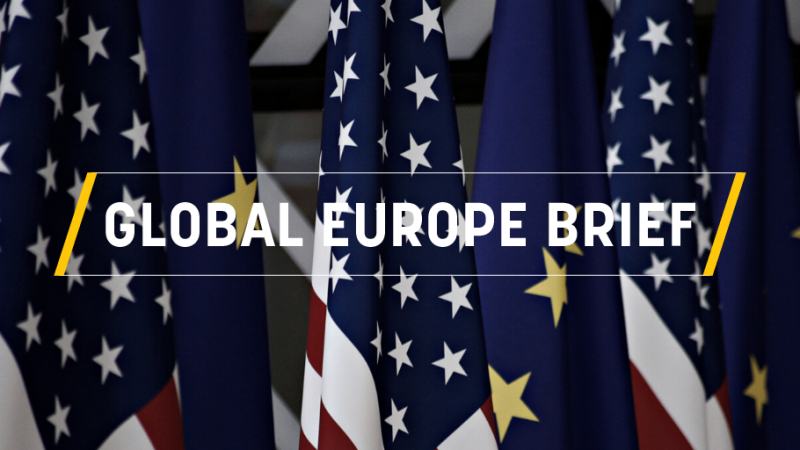 The world, and especially Europe, nervously awaits the US election result as America faces tense and uncertain days ahead

The election has come down to tight races in four states to determine who wins the White House. While being short of the necessary 270 votes, Biden has more paths to victory than Trump.

The global unease of not knowing is made worse by growing concerns about how America’s ‘messy’ democracy might heal after the divisive campaign.

Final results in each state could take days, pollsters told EURACTIV, adding that “Fridays are for optimists”.

‘TARNISHED’ ELECTION. With his re-election chances fading as more votes are counted in a handful of battleground states, Trump launched an extraordinary assault on the country’s democratic process from the White House, falsely claiming the election was being “stolen” from him.

Trump’s own extraordinary and premature claims of victory, and his threat to take the election to the Supreme Court, also sparked anxiety and drew comparisons with autocrats.

The OSCE’s observer mission to the US elections criticised Trump’s allegations of fraud in the election and expressed concern over attempts by his campaign to stop vote counting, saying it “undermined public trust” in democracy. The mission, which usually monitors elections in countries like Ukraine or Tajikistan, said there was no evidence of election fraud in Tuesday’s vote.

Although the OSCE has sent observers for every US presidential election since 2002, it is so far unprecedented for an observer mission to heavily reprimand a US president for interfering in elections.

Unsurprisingly, some parts of the world reacted with schadenfreude. Russia and Africa, which have been on the receiving end of US criticism about the conduct and accuracy of their elections and governance, scored some points by saying the past few days exposed the imperfections of American democracy. They were, however, not alone.

EUROPE’s LITTLE TRUMPs. From Europe came appeals for patience and rigorous vote-counting in the past few days. That is, from all except one.

Brussels has been cautious with its response, with the chiefs of the major institutions, EU and NATO alike, practising radio silence so far.

As analysts have pointed out, and the author of this Brief wrote before, everyone is aware that a second Trump term could divide Europe as some countries seek to court him for bilateral favours.

A Biden win would be a setback for Trump’s admirers in Hungary and Poland, who, just like Trump, never seem to miss an opportunity to undermine a coordinated European approach.

In a Special Edition of the Capitals, EURACTIV’s Network gives you an overview of the state-of-play of EU-US relations, both in terms of policy implications and scenarios European leaders are running for after the polls.

EUROPE’s STAKES – EUROPE AT STAKE? Over the past four years, President Trump’s policymaking has pushed the EU-US relationship into a precarious corner of growing distrust.

EU’s foreign policymakers have long voiced the desire for more “strategic autonomy” of the bloc, with more vocal ones arguing that no matter who wins the presidential race, they will need to realize that Europe is serious about no longer being Washington’s junior partner.

However, EU diplomats will be careful to avoid the mistake of declaring that “Europe First” is the answer to Trump’s “America First” – if he emerges victorious in Tuesday’s polls.

If Trump wins another term in office, there’s little reason to expect a new approach to foreign policy, analysts say. Under Biden, partial restoration of transatlantic unity would mean a significant change to relations with Russia and the general approach to multilateralism.

→ Biden or Trump? What the US election could mean for Europe’s foreign policy

THE NEXT HOURS (OR DAYS?). Biden gained ground on Trump in Georgia and Pennsylvania, but his lead diminished in Arizona. At the same time, the Trump team lost court cases in Georgia and Michigan but had a small win in Pennsylvania.

How much longer will this all take?

On Friday, we are expecting final results for Georgia, a usually reliably red state where Trump only leads by a couple of hundred votes. If the current trends hold, Biden would be on track to win it by a slim margin.

Arizona is also expected to release more results at 5PM (European time). Biden remains ahead in the state, but his margin has been shrinking.

Pennsylvania is also expecting to release another batch of results on Friday. Despite a wide margin from in-person voting, Trump only leads by 24,000 with 175,000 votes left to count, mostly absentee ballots which are going massively in Biden’s favour.

The latest tallies are expected to come from Nevada, where Biden leads by less than 12,000 votes. A state administrator has said that they will publish an update on Friday, but the bulk of the counting for the absentee ballots will be done over the weekend.

If you want the nitty-gritty, here’s something for all the election data masochists.

Read the whole Special Report here → US Election Special 2020: What to watch and why it matters

**Special thanks to Sarah Lawton, our in-house American, who served as contributor and fact-checker.

WTO JOB. Members of the World Trade Organisation are likely to appoint Ngozi Okonjo-Iweala as the trade body’s director general next week despite attempts by US President Trump to block the former Nigerian finance minister. The EU has reiterated the bloc’s support for Okonjo-Iweala.

PESCO DEAL. As of this week, third states can participate in the EU’s joint defence projects under PESCO. We reported last week about the political agreement here.

ANTI-TERRORISM COOPERATION. Germany and France want the EU to cooperate more closely in the fight against terrorism, particularly when it comes to a more open exchange of intelligence information. However, member states distrust each other.

BUDGET BOOST. Italy has announced a major boost to its national defence budget even as the country spends millions on battling the devastating effect of COVID-19 on its economy. Spending is up 9.6% this year to €15.3 billion, with the procurement budget being the big winner as it rises by 26% from last year.

JOINT FORCE. After the UK and France signed treaties on defence and security, and on nuclear cooperation ten years ago, they now are able to deploy a joint force, which “reached full operating capacity and can now rapidly deploy over 10,000 personnel in response to a crisis to fulfil a range of tasks including high-intensity operations, peacekeeping, disaster relief or humanitarian assistance”, the UK’s defence ministry announced.

OVERDUE RESIGNATION. Kosovo’s President Hashim Thaçi resigned with immediate effect after learning that the Kosovo war crimes tribunal had confirmed his indictment for war crimes. Prosecutors contend that Thaçi is responsible for nearly 100 murders of civilians during the war. He denies any wrongdoing.

BULGARIAN VETO. On 11 November, North Macedonia is likely to face a Bulgarian veto, preventing it from opening long-awaited membership negotiations with the EU. For someone outside the region, it is difficult to understand how Bulgaria, which organised a Western Balkans summit during its EU presidency and fought in favour of Skopje against other EU member states (France, Netherlands) who blocked the dossier one year ago, is making such a dramatic U-turn. Read some background here.

WAR CRIMES. Artillery strikes on civilians in the Nagorno-Karabakh conflict could amount to war crimes, the UN human rights chief said, reiterating a call for Azerbaijan and Armenia to halt attacks on towns, schools and hospitals in the mountain enclave.

Europe’s everyday business is going back into lockdown reality. We’ll keep you updated on all relevant EU foreign affairs news, as we face a busy finish of this troubled 2020.

To read-up on previous editions of this newsletter, have a look here: