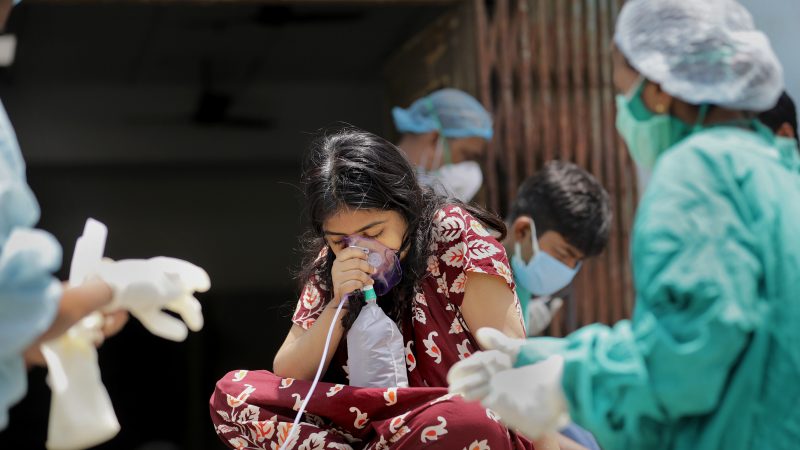 India has seen a massive surge in COVID-19 cases in recent days, with hospitals in the capital and across the country turning away patients after running out of medical oxygen and beds.

VIDEO: 🇮🇳 An overcrowded Covid-19 ward in a #NewDelhi hospital where two or three patients share a single bed, with barely enough space for others to stand. India's daily coronavirus death toll has hit a new record of 2,624 as the government battles to get oxygen to hospitals pic.twitter.com/pcBLJ7ScxQ

The country, which has a population of 1.3 billion, has driven increases in global case numbers in recent days, recording 349,691 new infections and 2,767 deaths on Sunday — the highest since the start of the pandemic.

In India, people are dying while waiting to see doctors as the second wave of the coronavirus rapidly evolves into a devastating crisis, with mounting evidence that the actual death toll is far higher than officially reported. https://t.co/aWkyHU3qyF

“Alarmed by the epidemiological situation in India. We are ready to support,” Commission President Ursula von der Leyen wrote on Twitter on Sunday (25 April).

France will send oxygen respiratory equipment to India in the coming days to help the country deal with the serious COVID-19 crisis there, the office of French President Emmanuel Macron said on Sunday.

Germany will send oxygen and medical aid to India in the coming days to help it tackle its COVID-19 crisis, Foreign Minister Heiko Maas said on Monday.

“The second wave is currently rolling over India with unprecedented power. It was right that we acted quickly to stop the entry of the new mutation in Germany,” Maas told the Rheinische Post newspaper.

Germany has classified India as a coronavirus high incidence area and also put the country on a separate warning list for coronavirus variants.

Mass said Germany would do its utmost to help India overcome the emergency.

A German defence ministry spokeswoman said the foreign ministry had asked the military to look into providing a mobile oxygen production facility as well as support to transport other emergency and relief goods to India.

German Chancellor Angela Merkel on Sunday expressed her “sympathy over the terrible suffering” that the pandemic had brought to India.

“Germany stands in solidarity with India and is urgently preparing a mission of support,” Merkel said in a statement.

“The United States has identified sources of specific raw material urgently required for Indian manufacture of the Covishield vaccine,” a White House statement said, referring to the India-produced version of the AstraZeneca shot.

But it did not mention whether the US would send millions of surplus AstraZeneca vaccine doses to India, after top US pandemic adviser Anthony Fauci said Sunday that would be considered.

Indian Prime Minister Narendra Modi said that the country had been shaken by a “storm” as he called on people to get vaccinated and not “get swayed by any rumour about the vaccines”.

The country has administered almost 141 million vaccine shots so far, but experts say the mass inoculation programme needs to be significantly stepped up.

Experts have long warned that it is in the global interest for wealthier countries to help large, lower-income nations like India to vaccinate their populations to hasten the end of the pandemic.

A weeklong lockdown in Delhi, the megacity of 20 million, set to last until Monday, was extended by one week.

On Sunday, Twitter confirmed it had withheld dozens of tweets critical of the unfolding crisis at the request of the Indian government.