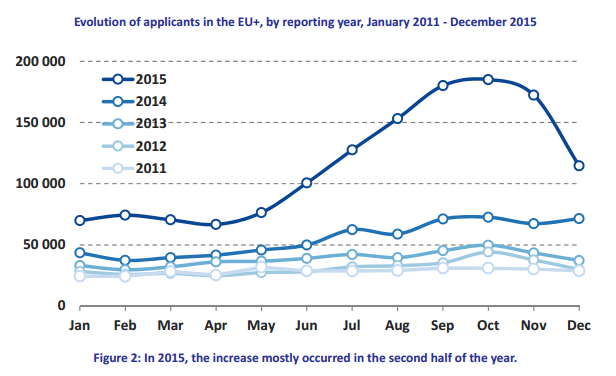 Evolution of applicants in the EU+. EASO Annual report on the situation of asylum in the EU, 2015. [EASO]

A graph from the 2015 annual report of the EU asylum office EASO clearly illustrates the spike in numbers of applicants for international protection in the summer and autumn of 2015, after German authorities issued messages welcoming refugees.

On 8 July, the EASO released a 141-page report, providing  a comprehensive overview of the situation of asylum in the EU+ (EU member states plus Norway and Switzerland) by examining requests for international protection to the EU, analysing application and decision data, and focusing on some of the most important countries of origin of applicants for international protection.

Among other things, the report contains a graph showing the month-to-month evolution in the number of applicants for international protection in 2015 compared to previous years. The increase began at the end of 2014 and continued throughout most of 2015.

March and April showed a slight decline before an exponential increase began in May and lasted for six consecutive months. The highest level was reached in October with more than 185,000 applications in that month alone. In November and December, there was a decline, which is normal for the end of the year, but levels remained much higher than in previous years with approximately 115,000 applicants in December.

Germany was by large the main destination country in terms of asylum requests, with almost half a million applications lodged in 2015.

Asked how he would interpret the graph against the background of a famous statement by German Chancellor Angela Merkel, an EASO official said that journalists were free to interpret it themselves.

“You can look at the report and make your own conclusions,” said Jean-Pierre Schembri, EASO spokesperson.

“Wir schaffen das” – “We can do it,” exclaimed German Chancellor Angela Merkel at a press conference on 31 August 2015, the sentence becoming the basic core slogan of “new culture of welcome.”

But perhaps more significantly, a tweet by Germany’s Interior Ministry, the federal states and the Federal Office for Migration and Refugees (BAMF) on 25 August 2015 said “We are at present largely no longer enforcing #Dublin procedures for Syrian citizens.”

The tweet went around the world thousands of times, and was interpreted by prospective migrants as an open invitation by Germany to receive refugees.

EASO experts provided provisional data for 2016, which show that currently the number of asylum applications across the EU+ are lower than in 2015, but remain much higher than in 2013 or 2014.

euractiv.com asked Schembri if the EASO was able to evaluate if the statement of another politician, Slovakia’s Prime Minister Robert Fico, who recently said that asylum seekers disappear from his country “the next day”, was true.

“I’m happy to report that we are able to measure it,” Schembri said.