Greece pushes for sanctions against Turkey, but EU insists on dialogue 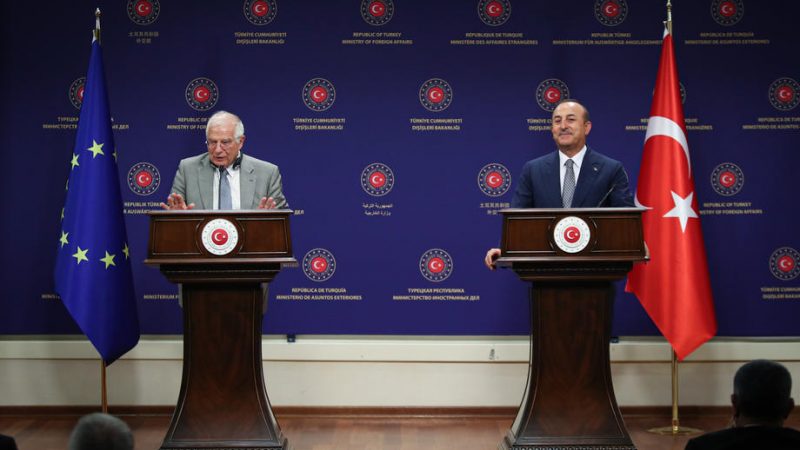 All EU-Turkey open issues will be raised, from the illegal drillings in the Mediterranean to Turkey’s involvement in Libya and Syria. But for the Commission, the imposition of sanctions is not “in principle” on the table. [EPA/ FATIH AKTAS / Turkish Foreign M]

Greece’s minister of foreign affairs will ask the EU on Monday (13 July) for a list of potential sanctions against Turkey in case Ankara violates Greek territory. However, EU sources said last week that dialogue should be prioritised in the face of Turkey’s increasingly defiant behaviour.

EU foreign affairs ministers will gather in Brussels on Monday at a meeting primarily focused on Turkey. All EU-Turkey open issues will be raised, from the illegal drillings in the Mediterranean to Turkey’s involvement in Libya and Syria.

“We [Greece and Cyprus] call on the EU to have a list of strong sanctions in case it [Turkey] violates the sovereign rights of Greece and Cyprus,” Minister Nikos Dendias said.

But for the Commission, the imposition of sanctions is, “in principle”, not on the table.

“Any minister who wants to can raise the issue of sanctions. But the primary goal of EU High Representative for Foreign Affairs and Security Policy Josep Borrell is to receive a clear and unanimous mandate from member states to start a dialogue with Ankara,” sources said.

For Brussels, the first priority is to reach an agreement when it comes to Turkey’s announced illegal drillings for oil and gas in the Mediterranean, which involve territorial waters of Greece and Cyprus.

Borrell is expected to present “concrete ideas” on this matter, as Brussels believes that if a solution is found, this would eventually help unlock other issues related to the Turkish involvement in Syria.

France is also expected to escalate its rhetoric against Turkey today, especially following an incident in the Eastern Mediterranean in which France says Turkish frigates were “extremely aggressive” towards a French navy vessel participating in a NATO mission in the area.

“We belong to the same alliance, NATO, and the French frigate became the target of a Turkish one. This is not how allies behave. We want to know why a Turkish frigate felt so uncomfortable with a NATO mission to implement the arms embargo in Libya,” French MEP Nathalie Loiseau told EURACTIV last week.

Loiseau went further and said that unless there is dialogue and cooperation, there should be consequences for dangerous behaviours.

“My feeling is that for the time being, we do not have the same values as the Turkish regime. That is why Turkey’s accession negotiations have been suspended. The problem now is that we may not have the same interests when it comes to security,” she added.

However, Germany, which holds the rotating EU Council presidency, does not seem eager to escalate relations with Turkey and pushes for a conciliatory approach.

Lawmakers in the European Parliament were tough against Turkey last week (9 July).

MEPs from all political groups in the Parliament strongly condemned Turkish President Recep Tayyip Erdoğan and his regime’s activities in the Mediterranean, saying Borrell should adopt a tougher stance against Ankara.

Hagia Sophia was first constructed 1,500 years ago as a cathedral in the Christian Byzantine Empire where their emperors were crowned.

It was converted into a mosque after the Ottoman conquest of Constantinople in 1453, then became a museum in 1935.

The new conversion triggered strong reactions in Athens and worldwide.

Washington said it was disappointed by this move while the EU called the decision  “regrettable”. Pope Francis commented on Sunday: “I think of Hagia Sophia and I am very saddened”.

“Hagia Sophia is a symbol of the Christian heritage and obviously President Erdoğan wants to remove that Christian heritage from the region’s history books, especially Turkey […] Erdoğan uses emotional and populist messages in his politics to remain strong in power,” Weber said.

London indirectly backed Ankara’s decision, saying it is a sovereign issue of Turkey. “However, as a UNESCO World Heritage Site, we hope that Hagia Sophia will remain accessible to all, as a testimony to the rich and diverse history of Turkey.”

EU sources told EURACTIV on Saturday that the issue will be discussed but will not affect the agenda of EU foreign ministers on Monday.