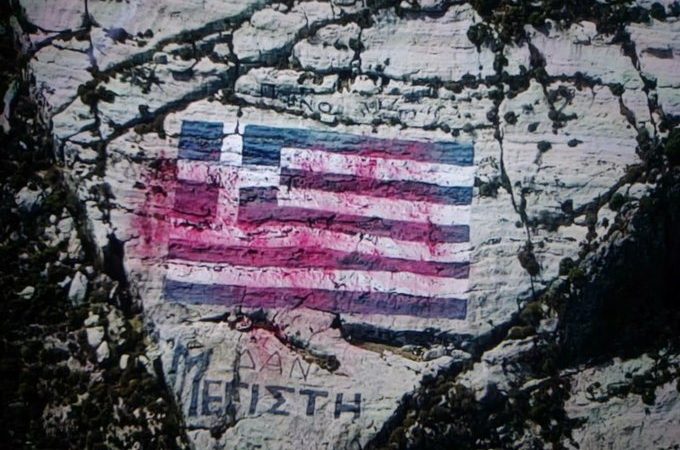 On Saturday morning (26 September), authorities on the Kastellorizo island found red paint smeared over a large mural of the Greek flag, painted on a hill near its port. [@GreekAnalyst Twitter]

Greece on Sunday (27 September) condemned vandalism to a mural of the Greek flag on Kastellorizo island blamed on Turkish nationals, a day before the arrival in the country of US Secretary of State Mike Pompeo.

The tiny Greek island, just two kilometres off the Turkish coast, lies in disputed waters that have been a source of escalating tensions between Turkey and Greece.

At the centre of the latest crisis is Turkey’s deployment last month of a seismic research vessel accompanied by warships in the eastern Mediterranean, near Kastellorizo, despite repeated protests from Athens and the European Union.

On Saturday morning, authorities on the island found red paint smeared over a large mural of the Greek flag, painted on a hill near its port.

“We unequivocally condemn yesterday’s desecration of the Greek flag in Kastellorizo. Unacceptable actions such as these are aimed at undermining the prospects for de-escalation of the tensions between the two countries,” the Greek foreign ministry said in a statement.

“We expect the immediate condemnation and the prompt investigation of the incident by the Turkish authorities, so that the perpetrators be brought to justice,” it added.

There were also reports of a drone flying over the island Saturday playing Turkish anthems.

The Turkish network Karar TV showed video footage from a drone of the defaced painting, while Greek media reported that the network had attributed the vandalism to “Turkish engineers” who had thrown “100 kilos of red paint on the Greek flag”.

On 10 August, Turkish navy ships escorted an exploration vessel into the waters south off Kastellorizo.

Four days earlier, Athens had enraged Ankara after signing an agreement with Cairo on their respective maritime economic zones, claiming the waters around the island are under Greek sovereignty.

Under pressure from European and NATO allies, Turkey pulled back the research ship in a move hailed as a “positive first step” by the Greek prime minister.

The tone has recently softened with Greece and Turkey, both NATO members, agreeing to begin exploratory talks over the dispute.

The US Secretary of State is visiting Greece on Monday in a strong sign of support.

Back on the road and heading to Europe to reinforce our strong bilateral relationships and the importance of sustained regional cooperation. First stop: Thessaloniki, Greece. pic.twitter.com/eoIqdGmHso

Pompeo arrived in Thessaloniki, Greece’s second-largest city which has historic Turkish roots, and will continue to the southern island of Crete, where he will meet the conservative premier at his home and visit the NATO base at Souda Bay.

A US official said he would focus on building relations with Greece but also offer support for diplomacy with Turkey.