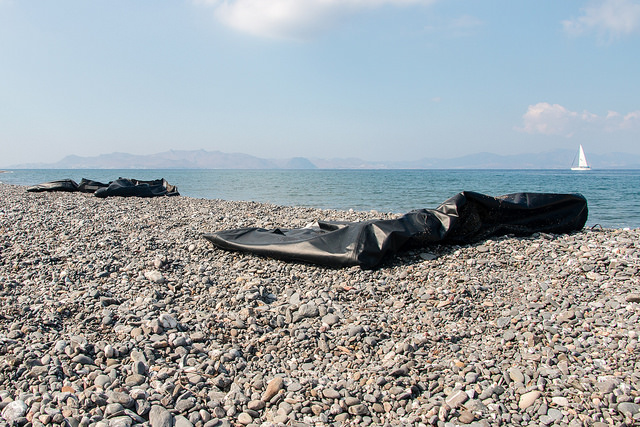 To support his argument, the MEP presented various scenarios and positions adopted by other EU member states affected by the coronavirus crisis. [Ann Wuyts/Flickr]

The non-implementation of the decisions made at the latest EU summit has led the refugee crisis-hit Greek islands to an unprecedented situation. EURACTIV Greece reports.

Immigrant corpses are reportedly being put in ice cream freezers.

Athens warned on Sunday (28 February) that the number of refugees and migrants on its soil could more than triple next month, reaching as many as 70,000, as a Balkan cap on border crossings left thousands “trapped” in the country.

In an interview with EURACTIV Greece last week, Migration Minister Ioannis Mouzalas said that Greece would face difficult days until the next EU-Turkey summit on 7 March.

“There is a huge difficulty for Greece, some tens of thousands of refugees and illegal immigrants will remain in our country and we will face difficulty […] we want to offer decent conditions for these people with the dignity that characterises our people,” he noted.

He added that the country did not have the time to get prepared, as several EU member states ignored the latest summit agreement, and isolated Greece by closing their borders.

EURACTIV was informed, though, that the island complex of Dodecanese in southeastern Aegean is faced with a creepy situation.

Leros is an island with a population of 7000, and receives, depending on weather conditions, between 300 and 500 refugees daily, mainly via the neighbouring island, Farmakonisi.

The refugees arrive begin their journey in Didim, on Turkey’s Aegean coast.

“Smugglers ship them to Farmakonisi […] and then English and Finnish Frontex vessels identify and transfer them to Leros island,” a source told EURACTIV Greece in condition of unanimity.

“Smugglers usually carry weapons and they are mainly Turks or Kurds from Turkey,” the same source added.

Regarding the composition of refugee arrivals, they are mainly Syrians, but there is a remarkable number of Palestinians, Iraqis or Afghans. Locals are wondering why these people who are considered not asylum seekers “decide to immigrate now”.

The sources described “creepy” details about everyday life on the island.

“Due to the lack of large morgues on the island, many corpses [of immigrants] were placed in ice cream freezers,” the source stressed, adding:

“When in one week you have to manage a big number of corpses what are you doing? We are trying to handle the situation but we lack equipment […] the assistance from the European Civil Protection Mechanism is poor,” it underlined.

The Civil Protection Mechanism was established in 2001 as a means of fostering cooperation among national civil protection authorities across Europe.

But its contribution to the current refugee crisis has been quite disappointing.

For instance, Athens has requested 26 ambulances, and to date, has received nothing.

During the screening process, the nationality of the refugee is identified, and photos and fingerprints are taken and registered in EU’s fingerprint database, Eurodac.

The majority of refugees do not have documents or passports.

A source told EURACTIV that there is a document in which the left column indicates the nationality claimed by the refugee, and the right column, the nationality the Frontex officer believes the immigrant has, based on a brief interview.

As far as debriefing is concerned, a Frontex officer is interviewing separately the refugees/immigrants without other people being present.

In this interview Frontex is seeking information regarding the character of an immigrant, how he/she used to live and tries to get information on traffickers and smugglers.

In the meantime, the refugee flows have severely affected tourism on Greek islands in Aegean.

According to Kathimerini, reservations for Lesvos island have decreased by 90%, for Chios 60%, and for the island of Samos by 40%.

Greek hotel owners in Chios claim that the current tourist season is expected to be the worst in 40 years.