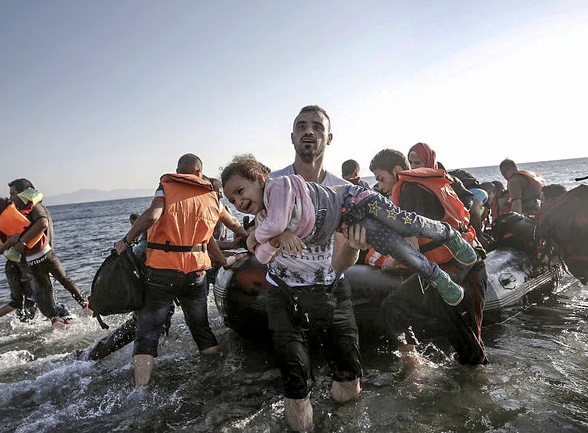 A Syrian migrant holds a young girl in his arms upon arriving on a dinghy to the Greek island of Kos, Greece. [Freedom House / Flickr]

In an interview with Hungary’s Népszabadsàg, Greece’s Alternate Foreign Minister for European Affairs, Nikos Xydakis, wondered why Budapest wanted to tell others what to do with the refugee crisis.

“We have never criticized the policy of the Hungarian Premier, Victor Orbán,” Xydakis said.

The leaders of the ‘Visegrad Four’ (also known as V4) are meeting today in Prague for a mini-summit ahead of the 18-19 February EU Council meeting.

The Visegrad leaders seek a possible “plan B” in case of a collapse of the Schengen system and in particular an exit of Greece from the group. In particular, they want to make sure that the borders between Bulgaria and Greece and Macedonia and Greece are sealed and effectively stop the migration flows.

Earlier this month, the Greek government said that the Visegrad Four were pressing Athens not to abide by the international rules, and to stop rescuing refugees at sea.

Athens, also, noted that the Visegrad leaders urged the EU to shut the Greek borders.

“It’s weird that from Budapest – which is attacking Athens – we have not received a single blanket or a tent within the EU Civil Protection Mechanism until the end of January,” the minister said.

The Civil Protection Mechanism was established in 2001 as a means of fostering cooperation among national civil protection authorities across Europe.

The Greek official stressed that other EU member states helped and had already provided equipment to take care of the refugees.

“Lithuania -which is quite far from the Mediterranean zone crisis, sent two patrol ships,” Xydakis said.

For instance, according to the data, Athens had requested 26 ambulances and received nothing.

Xydakis continued, stressing that while Hungary has sent five police officers to Aegean Sea Frontex mission, it has simultaneously provided the Skopje government with 100 kilometers of razor wire and a 31-member military/police unit to build a “double fence” at the Greek border.

“This is a political decision that we consider as a hostile action by Hungary. On the contrary, we treat [Hungary] as a friendly country, which is our ally in NATO and our partner in the European Union,” the outspoken minister noted.

He said that “Macedonian” and Bulgarian neighbors move was “unfriendly but acceptable” if they wish to defend their borders.

“But it is unacceptable other EU member states to send police and soldiers at the “Macedonian”- Greek and the Bulgarian – Greek border. Who is the enemy? The Greeks?” Xydakis wondered.

2 responses to “Greek minister: Hungary has sent nothing, not even a blanket”