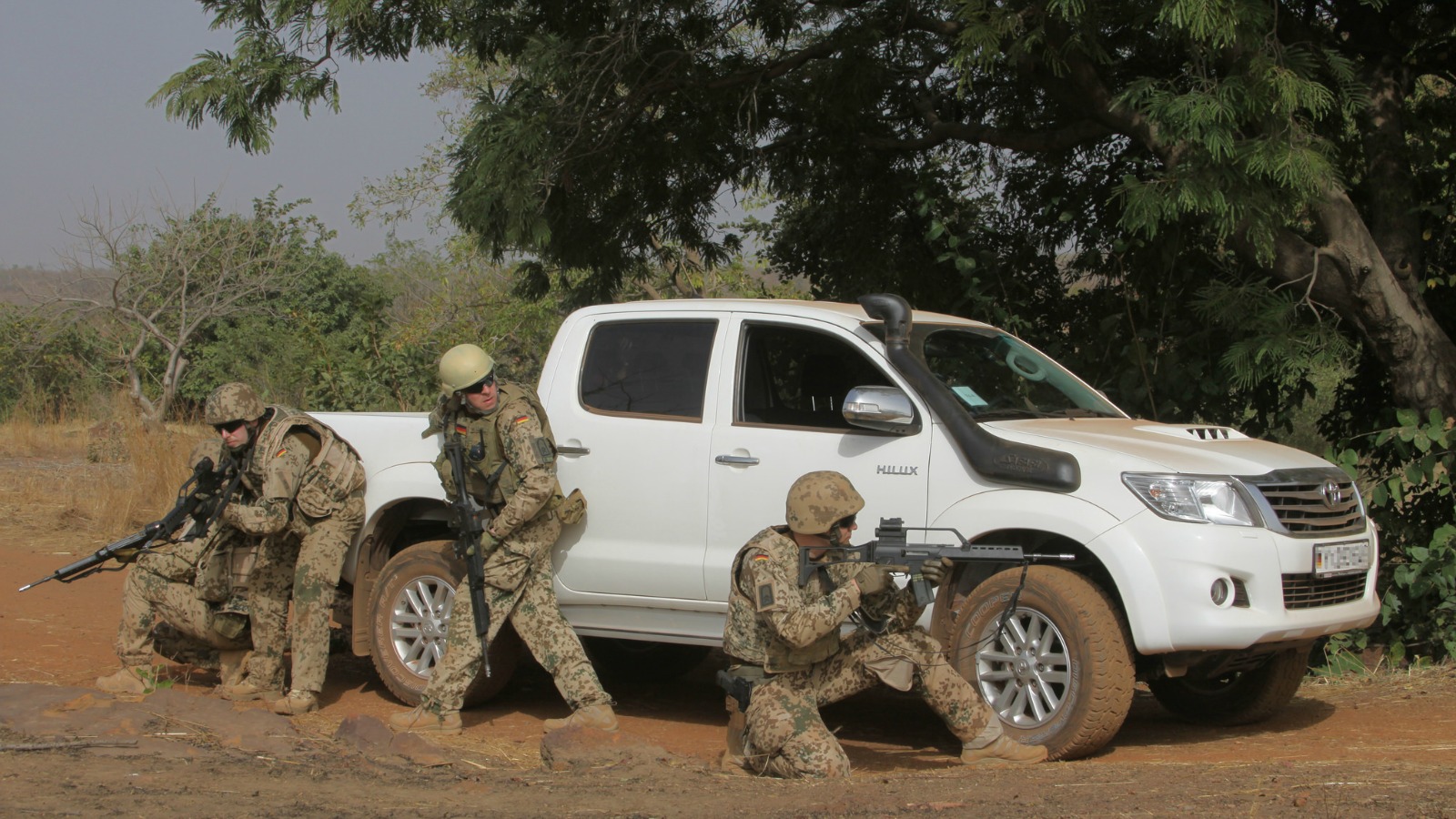 The EUTM in action. [EUTM]

Four gunmen attacked a hotel hosting an EU military training mission in Mali’s capital yesterday (21 March), with one shot dead by security guards, according to a source within the mission.

Gunfire was heard in the area by witnesses and AFP correspondents from around 2000 GMT as the armed assailants attempted to enter the premises of a hotel owned by Mali’s “Azalai” chain, before fleeing return fire from security guards.

“Four people tried to force their way through the barricade firing shots,” the source told AFP. “One of the four was neutralised, we are searching for the three others,” the source added.

Police showed AFP a photo they said was of the dead attacker, who was pictured wearing blue jeans and slumped in a pool of his own blood following the confrontation.

“I heard heavy gunfire behind the hotel. Then Malian troops blocked off the area,” a witness told AFP.

The source within the mission said there was a sniper among the group of attackers.

The European Union Training Mission-Mali (EUTM) confirmed in a tweet posted around 2010 GMT that none of its personnel had been harmed.

EUTM-MALI HQ has been attacked. No EUTM-Mali personnel has been hurt or injured during the attack. EUTM-Mali is at the securing the area.

The establishment where the EU deployment was staying is in the same upmarket neighbourhood as the city’s Radisson Blu hotel, the site of an attack in November by Al-Qaeda-linked jihadists that left 20 people dead.

The area was cordoned off and armoured vehicles belonging to the UN and Malian military were on the scene, where an operation to find the escaped gunmen was still ongoing by 2200 GMT.

“A suicide bomber is in the vicinity of the EUTM headquarters,” said a Malian security source.

An advisor to Mali’s President Ibrahim Boubacar Keita called for calm and described the situation as “under control”.

“Security forces are on the front line,” the advisor said in a text. The president is currently on a visit to Namibia.

The EU training mission aims to reinforce the Malian army’s ability to engage in combat operations as they battle a jihadist insurgency and rampant banditry across vast swathes of the desert nation.

An EU foreign affairs representative said in a statement sent to AFP they were “cooperating with the Malian national authorities to understand the circumstances of this incident and to help find the persons responsible.”

The EUTM mission draws on expertise from 25 countries with more than 600 personnel, and is currently German-led.

French and UN forces are also attempting to back up the army but extremist groups are using new methods to spread terror after being ousted from key northern towns after a French-led intervention in 2013.

Northern Mali had fallen under the control of jihadist groups linked to Al-Qaeda in 2012, with the government unable to maintain security with domestic forces alone.

Since being chased from northern Mali, the jihadists have staged sporadic attacks on the country’s military forces and the UN peacekeeping mission based in the country, killing dozens, before turning to more spectacular civilian targets.

November’s attack was claimed by Al-Murabitoun, led by one-eyed Algerian militant Mokhtar Belmokhtar, as a joint operation with Al-Qaeda in the Islamic Maghreb (AQIM).