Rival Palestinian factions Hamas and Fatah signed an agreement on Thursday (12 October) on ending a decade-long split following talks mediated by Egypt in Cairo, with president Mahmud Abbas calling it a “final” accord.

Israeli Prime Minister Benjamin Netanyahu strongly condemned the deal, saying it would make peace with his country “much harder to achieve”.

Under the agreement, the West Bank-based Palestinian Authority (PA) is to resume full control of the Hamas-controlled Gaza Strip by December 1, according to a statement from Egypt’s government.

Abbas welcomed the deal and told AFP he considered it a “final agreement to end the division” – though many details remain to be resolved and previous reconciliation attempts have repeatedly failed.

Israel says Islamist movement Hamas, with whom it has fought three wars since 2008, must disarm and recognise the Jewish state as part of any Palestinian reconciliation deal.

US President Donald Trump is currently seeking to restart frozen peace talks between the Palestinians and Israel.

“Reconciling with mass murderers is part of the problem, not part of the solution,” Netanyahu said in a statement.

The agreement was signed in Cairo by new Hamas deputy leader Salah al-Aruri and Azzam al-Ahmad, head of the Fatah delegation for the talks, at the headquarters of Egypt’s intelligence service, which oversaw the negotiations.

Celebrations broke out in the Gaza Strip after the announcement of the deal, with residents waving flags of Egypt, Palestine, Fatah and Hamas.

“We hope they won’t disappoint our people and break the joy,” said Rahaab Kanaan, 55.

Negotiations are now expected to be held on forming a unity government, with the various Palestinian political movements invited to another meeting in Cairo on 21 November. 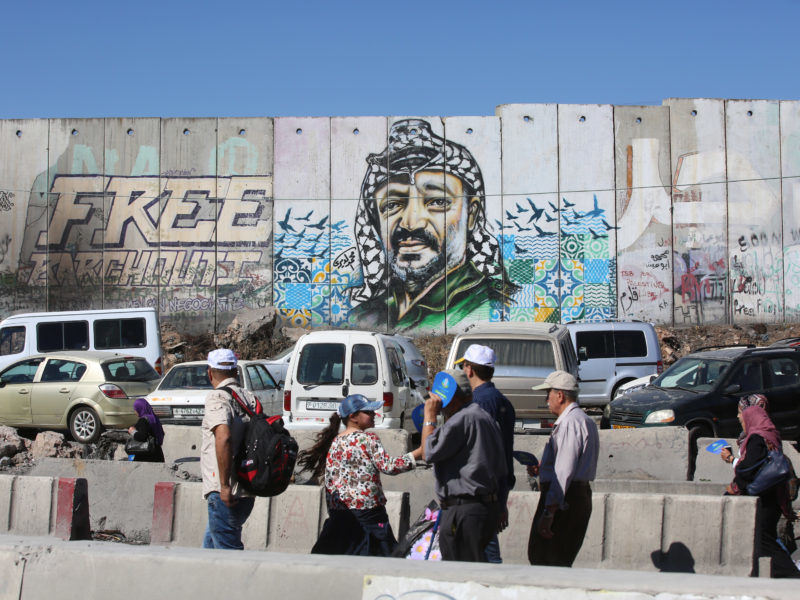 An official from Abbas’s Fatah movement said the Palestinian president was planning to soon travel to the Gaza Strip as part of the unity bid, in what would be his first visit in at least a decade.

Sanctions taken by Abbas against Gaza will also soon be lifted, the Fatah official said.

The deal includes 3,000 members of the West Bank-based PA’s police force redeploying to Gaza, a member of the negotiating team told AFP on condition of anonymity.

The figure is however a fraction of the more than 20,000 police officers employed separately by Hamas.

UN Secretary General António Guterres spoke to Abbas to congratulate him on the deal and said the United Nations “stands ready” to support the PA “take up its responsibilities in Gaza”, a UN statement said.

Guterres also underlined the “continuing need to urgently address the humanitarian crisis in Gaza, particularly with regard to the electricity crisis, and improved access to and from the territory”.

One of the key issues has been punitive measures taken by Abbas against Gaza in recent months, including reducing electricity payments that left the territory’s residents with only a few hours of power a day.

The Arab League also hailed the agreement saying it represented an “essential guarantee” toward achieving the aspirations of the Palestinian people to set up their own state.

The two sides began meeting in Cairo on Tuesday with the aim of ending the crippling split between the rival factions.

Hamas seized Gaza from Fatah in a near civil war in 2007 and the two factions have been at loggerheads ever since.

Egypt has been keen to improve security in the Sinai Peninsula which borders Gaza and where jihadist rebels have fought a long-running insurgency.

Last month, Hamas agreed to cede civil power in Gaza to the PA but the fate of its vast military wing remains a significant issue for the two sides.

Hamas is blacklisted as a terrorist organisation by the United States and the European Union.

Faced with increasing isolation and a severe electricity shortage, Hamas has reached out to Cairo for help, hoping to have the Rafah border with Egypt — largely closed in recent years — opened.

Azzam al-Ahmad said that, as part of the deal, Gaza’s border crossings with Israel will be handed back to the PA by 1 November with Rafah to follow shortly afterwards.

Egypt has also agreed to provide fuel to the Gaza Strip for electricity generation.

In return, Cairo pressed Hamas to move forward on reconciliation with Fatah.

Previous attempts at reconciliation have repeatedly failed, and many analysts are treating the latest bid with caution, waiting to see if actual change will occur on the ground.

Last week, PA prime minister Rami Hamdallah visited Gaza for the first time since 2015 and his ministers took formal control of government departments in the territory.

But the move was seen as mainly symbolic, with Hamas still effectively in charge in the Palestinian enclave of two million people.

One of the key sticking points will be the fate of Hamas’s 25,000-strong military wing, the Ezzedine al-Qassam Brigades.