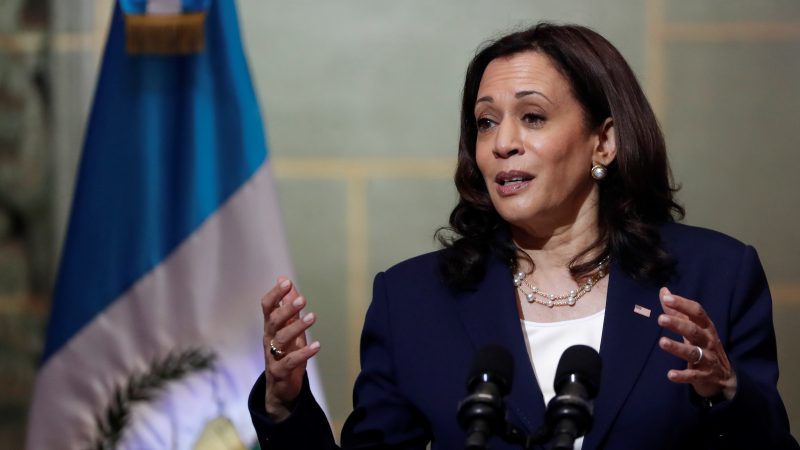 US Vice President Kamala Harris speaks during a press conference after a meeting with the President of Guatemala, Alejandro Giammattei, and his government ministers in the National Palace of Culture, in Guatemala City, Guatemala, 7 June 2021. [EPA-EFE/Esteban Biba]

US Vice President Kamala Harris said on Monday (7 June) she had “robust” talks with Guatemalan President Alejandro Giammattei on fighting corruption to deter immigration from Central America and bluntly warned migrants to not come to the United States.

Since President Joe Biden took office in January, the number of migrants taken into custody per month at the US Mexico border has risen to the highest levels in 20 years

“Do not come. Do not come. The United States will continue to enforce our laws and secure our borders,” Harris said at a news conference alongside Giammattei. “If you come to our border, you will be turned back.”

Harris also said a US anti-corruption task force would work with local prosecutors to punish corrupt actors in the region.

The Biden administration has identified corruption as an underlying cause of the poverty and violence driving record numbers of Central Americans to go to the United States.

The corruption task force has been previously floated, but Harris gave more details, saying it will combine resources from the Justice, State and Treasury departments.

In the build-up to Harris’ visit to Guatemala, her first official overseas trip, differences of opinion emerged about the fight against graft, with corruption fighters feted by Washington being criticized by Giammattei.

“We had a robust, candid and thorough conversation,” Harris said at the news conference after a three-hour meeting with Giammattei, who said they had discussed US concerns about developments in Guatemala.

Giammattei defended his own record in fighting malfeasance, saying he had not been accused of wrongdoing and saying graft was not only a problem faced by politicians. The fight against drug trafficking needed to be an integral part of tackling corruption, he said.

On the immigration front he announced a new processing center for migrants sent back from Mexico and the United States, which could increase capacity. He said the focus of the two countries should be on creating prosperity.

Most Guatemalan migrants leave because of poverty, he said, and come from a few rural municipalities.

Harris, a Democratic former US senator from California, responded to Republican criticism against her for not visiting the US-Mexico border and the administration for ignoring what they say is a crisis there. She said she was working on the ground in Guatemala.

“I’m just focused on that kind of work as opposed to grand gestures,” she said.

But she also took flak from fellow Democrats like US Representative Alexandria Ocasio-Cortez, who said on Twitter she was disappointed by Harris’s message to migrants.

“Seeking asylum at any US border is a 100% legal method of arrival,” she tweeted. She said the United States has contributed to regime change and destabilization in Latin America for decades. “We can’t help set someone’s house on fire and then blame them for fleeing.”

The United States orchestrated a coup against democratically elected leftist government Jacobo Arbenz in 1954, ushering in decades of military governments and a civil war estimated to have killed more than 200,000 people by the time it ended in 1996.

More recently, the US-financed, UN Commission Against Impunity in Guatemala helped bring down democratically elected conservative President Otto Perez Molina, a former general, who resigned after massive protests triggered by an investigation into corruption in his government.

The Biden administration on Monday also unveiled details of another task force of prosecutors to combat human smuggling in Central America and Mexico.

US Attorney General Merrick B. Garland said the Joint Task Force Alpha would marshal Justice Department and Homeland Security resources against “the most prolific and dangerous” human smuggling and trafficking groups in the region, according to a statement. It said the group will complement efforts against corrupt actors.

However, Washington’s push to tackle “root causes” of migration in El Salvador, Guatemala and Honduras have been undermined by a backlash against anti-corruption bodies the United States considers independent but that local elites say are biased.

Harris said she discussed sharing COVID-19 vaccines with Guatemala during Monday’s meeting. She confirmed that the United States would supply half a million COVID-19 doses to Guatemala in addition to the $26 million it has given the country to fight the pandemic.