The EU criticized Thailand's fisheries monitoring, fisheries control and sanctioning systems and said if the situation did not improve, the commission could ban fisheries imports from the country. [EPA/YONGYOT PRUKSARAK]

Shrimp, tuna and seafood not only play an important role in Thai cuisine, they are also a driving economic factor. However, the country has been under pressure for the past three years as the EU, Thailand’s third largest trading partner after China and Japan, is threatening to cease purchasing fishery products.

In 2015, the EU issued two yellow cards against the country under its regulation against unregulated fishing. That is a clear warning, because if a red card were to follow, the EU would completely stop its fish trade with Thailand.

So far, this has not happened, even though the volume of trade in fish exports into the EU declined by around €240 million last year compared to 2014. The reason for the faltering business is the partly uncertified fishery business in Thailand, which violates EU import regulations. 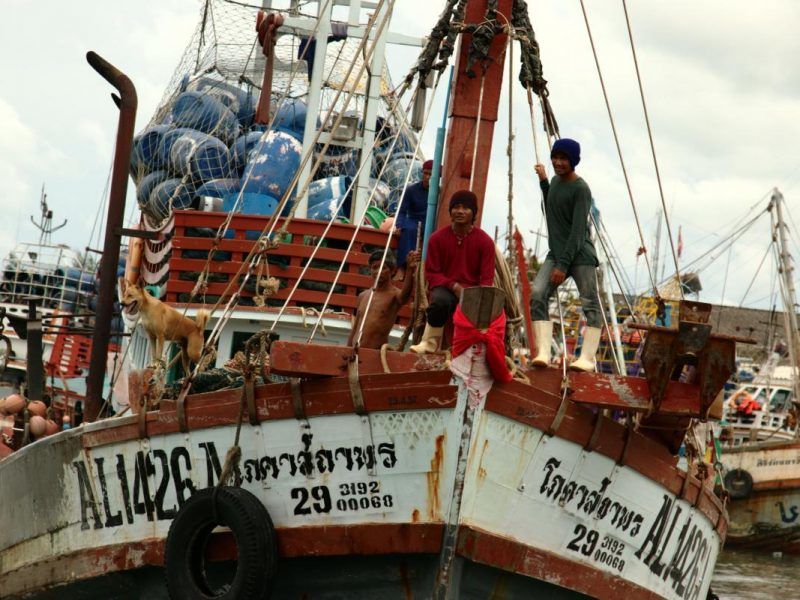 But there is more to it, namely reports of trafficking and the bad exploitation of many of the 3.8 million foreign workers, mostly from Burma, Laos and Cambodia.

“The working conditions on the fishing boats are largely catastrophic and border on modern slavery,” SPD Bundestag member Dirk Wiese told EURACTIV.de, after the EU issued their yellow cards. “Unstable conditions prevail without any protection of the workers.”

In fact, a ready-made free travel agreement with Thailand has been sitting on the Commission’s desk since 2013. But given the circumstances in the fishing industry, it is now on ice.

However, there is movement in the negotiations: last December, EU foreign ministers in the Council decided to resume discussions with Thailand at all levels – under the condition that the abuses are eliminated, the Commission said at the time.

Controls are far from reaching everyone

The threats of the EU have already been effective. The Thai government has been making a real effort since 2015 to clean up the abuses it was accused of, says MEP Barbara Lochbihler (Greens / EFA).

She travelled to Thailand with the European Parliament’s Subcommittee on Human Rights to get an idea of ​​the situation before the EU opens new talks on the trade agreement.

Important labour law provisions on wages, working hours, security and care have been enforced. In addition, trained security officers inspect boats and their crew at each entrance and exit from the port.

“The staff is qualified. In places where there is control, it is done quite appropriately,” says Lochbihler. But the system remains inefficient, 800,000 people are not yet recorded.

In addition, the measures are too superficial, she criticises: “There are far too few convictions of captains and boat owners. The controls do not address the backers who have their fingers in play in situations of extreme exploitation.”

A Human Rights Watch (HRW) report released in January comes up with similar conclusions: It is true that the monitoring systems gave actually led to significant improvements. However, many things happen only on paper.

The newly introduced “pink card” system, which requires all fishery workers to keep records of their work status, has made the situation worse, the human rights organisation states.

One of the reasons is that fishermen are so tied to a specific region or an employer and cannot leave them.

The Thai government needs to revise its concept of forced labour and recognise that it can also affect formally registered fishermen, HRW demands: “In this way, regular human rights abuses remain unpunished, while complacent civil servants are content to trust the papers, which fishery companies provide as prove for their legal compliance.”

Will Thailand remain in the hands of the military?

In order for the FTA to be concluded, Thailand’s government will have to continue providing clear evidence of recovery. For Brussels, the focus of the negotiations is less on compliance with fishing practices than on human rights.

A prerequisite for the next step is a democratic election, which since 2016 has been repeatedly postponed due to the death of the king. Currently, the country is led by a military government that took power after months of political unrest in May 2014. Meanwhile, elections are scheduled for spring 2019.

However, the extent to which the elections will ease the grip of current Prime Minister and army officer Prayuth Chan-Ocha is questionable. Currently, there is still a ban on assembly for more than five people; while a law against insulting the royal house hangs like a sword of Damocles above any kind of election campaign in the country.

With the prospect that Thailand could not continue to have a free civilian government even after an election, the EU must all the more put on a clear line, says Lochbihler: “We have room for manoeuvre, because the EU market is very attractive to the Thai government. But first, freedom of assembly and expression must be guaranteed. In addition, Thailand must sign important core resolutions of the international labour organisation so that fishermen, for example, can join unions.”

At the same time, it is known in Brussels that renouncing a trade agreement with Thailand would also amount to a loss of power in the region, as China and Japan dominate the Thai market.