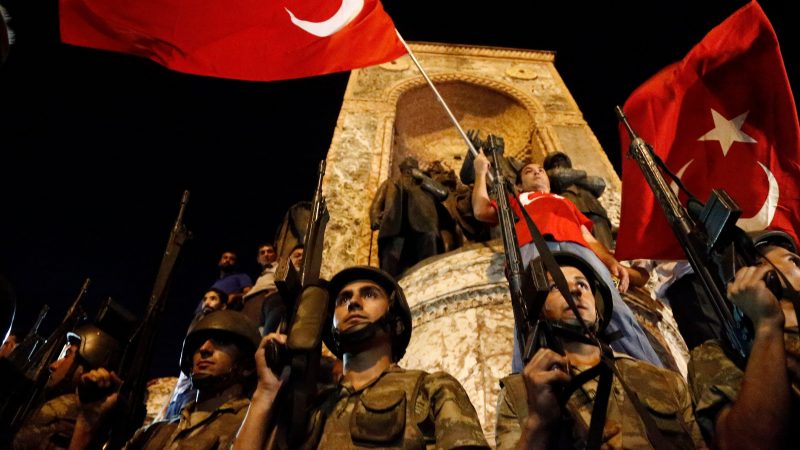 A Turkish court will hand down verdicts Thursday (26 November) to nearly 500 suspects in one of the main trials stemming from the bloody 2016 coup attempt against President Recep Tayyip Erdoğan.

Fethullah Gülen, a US-based Muslim preacher who was once an Erdoğan ally, is accused of ordering the failed putsch. His movement has been proscribed as a terrorist group by Ankara, although he strongly denies all charges.

In total, 251 people died and over 2,000 were injured in what has turned into the defining moment of Erdoğan’s rule and Turkey’s contemporary politics.

Thursday’s trial revolves around events at the Akinci air force base near Ankara.

The then chief of staff general Hulusi Akar — now the defence minister — and other top commanders were held hostage at the base for one night before their rescue on the morning of 16 July.

The trial of 475 disgruntled air force pilots and other suspects linked to the base began in August 2017 in the country’s largest courtroom, which sits inside a prison complex in Sincan, Ankara province.

They are charged with crimes including murder, attempting to violate the constitutional order and attempting to assassinate Erdoğan. Guilty verdicts will result in life in jail.

Prosecutors accuse them of choreographing the coup bid from the base, where Turkish officials believe they gave orders for jets to bomb state buildings.

The parliament was hit three times by F-16 fighter jets, as was the road near the presidential palace and the headquarters of the special forces and the Ankara police.

Erdoğan was on vacation in southern Turkey at the time.

The bombs killed 68 people in the capital and injured more than 200. Nine civilians also died during an attempt to stop the plotters at the entrance to the base.

Gülen, Adil Oksuz, a theology lecturer whom officials claim was a key coordinator of what was happening on the ground, and four others are being tried in absentia.

Oksuz was detained shortly after the coup bid but was then released and is on the run.

Another 365 are in pre-trial detention, the Anadolu state news agency said.

Businessman Kemal Batmaz is accused of assisting Oksuz and is among four suspects facing 79 aggravated life sentences over their alleged management of the coup bid.

An aggravated life sentence has tougher terms of detention and replaced the death penalty after it was abolished in 2004 as part of Turkey’s drive to join the European Union.

The plot failed and was stamped out quickly, but its legacy haunts Turkey to this day.

A fierce government crackdown that followed has muzzled the media and seen tens of thousands arrested in nationwide raids.

More than 100,000 public sector employees, including teachers and judges, were sacked or suspended because of their suspected links to Gülen.

These arrests continue, although they are less comprehensive than in the first years after the coup bid.

Despite the large number of suspects, it is not the biggest coup-related trial. Some 521 suspects are on trial in a case focused on the presidential guard’s activities.

The trial is taking place in the specially-built courtroom for coup-related cases, with space for 1,800 people.

Since the trial began, 385 witnesses have given testimony in 515 hearings.

There have been 289 trials into the failed overthrow of Erdoğan and 10 continue, Anadolu reported.

More than 2,500 aggravated and standard life sentences have been issued by Turkish courts, with judges convicting 4,154 coup suspects since July 2016.