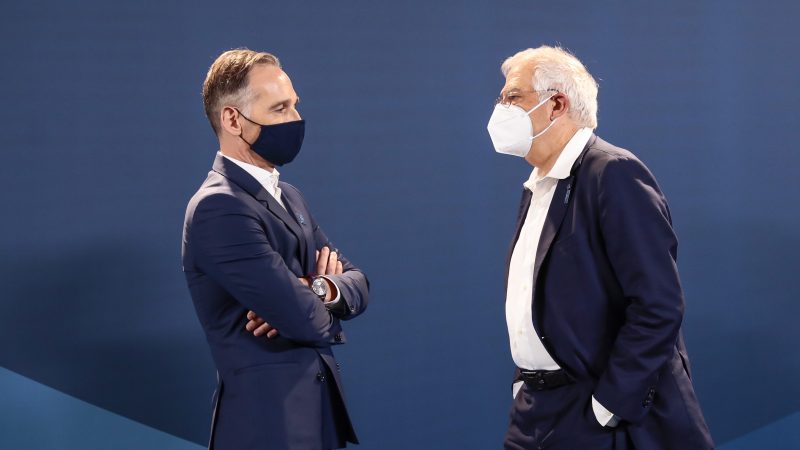 The ministers discussed only Belarus on Thursday (27 August) and reached no tangible conclusion as some member states attempted to link Belarus with the EU’s diplomatic response to Ankara, which Germany’s foreign minister Heiko Maas opposes.

Conclusions on Belarus might still depend on the discussion over Turkey on Friday (28 August), two EU diplomats told EURACTIV after the first round of talks.

The concerned member states said they understood the need to impose sanctions due to the violations of human rights in Belarus but stressed that the EU values should “apply everywhere equally”.

Cyprus hinted it might block Belarus sanctions unless the EU’s pressure on Turkey is increased.

“We don’t want there to be double standards or ambiguities,” Cypriot foreign minister Nikos Christodoulides said on Thursday in response to a question on whether his country would agree to Belarus sanctions without new Turkey sanctions.

“It is very important to protect the credibility of the EU,” he added.

According to Germany’s Maas, there is no feasible connection between the attempts to sanction the regime in Belarus and finding an option to deal with Turkey’s behaviour in the Eastern Mediterranean.

“We cannot compare or connect conflicts like the one in Belarus to the situation in the Eastern Mediterranean,” Maas told reporters just before heading into the meeting on Thursday (27 August).

“If we start with that, we risk being unable to act as EU,” he added.

Although the bloc has repeatedly condemned Ankara for violating Greece’s airspace and territorial waters, as well as carrying out exploratory drilling off Cyprus, it so far has held back from major punitive measures for fear of alienating a strategically important neighbour.

EU chief diplomat Josep Borrell will present today a “toolbox of options” to deal with Turkey. These options will also include sanctions, but senior EU officials said the concept is “broader than sanctions”.

“Foreign ministers will explore the different leverages or assets that we have at our disposal in order to convince Turkey to pick the dialogue option,” an EU diplomat said.

They are set to touch upon all pending issues with Ankara, ranging from migration to the war in Libya and gas drillings in the Eastern Mediterranean, with the permanent suspension of Turkey’s EU accession talks being on the table as well.

However, a decision on punitive measures against Turkey is not expected until a special EU leaders summit or an upstream foreign ministers’ meeting at the end of September.

At an extraordinary summit earlier in August, EU leaders agreed they do not recognise the results of the Belarus elections and the bloc is set to impose targeted sanctions on those involved in electoral fraud and repression of the protests that followed.

A legal process was started by EU foreign ministers on 14 August to draw up a list of targets responsible for violence and falsification of election results in Belarus for a new round of sanctions in response to President Alexander Lukashenko’s post-election crackdown, which was to be discussed further during their informal meeting in Berlin.

In Thursday’s debate on Belarus, which lasted four hours, Baltic member states made it clear they consider inadequate the previous EU plans for punitive measures against supporters of  Lukashenko.

EURACTIV was informed that some member states were dissatisfied that the “substantial number” of people to be sanctioned for the crackdown in Belarus, as promised by EU leaders, will amount to around 20 at most.

Although the list of entities was discussed in the meeting, the exact number of people to be sanctioned will depend on two factors.

On the one hand, a political decision must be made as to which level to target – lower-ranking officials who falsified results or ordered it, or the top echelon including Lukashenko himself.

EURACTIV understands that there is support building for a “gradual” escalation of punitive measures, with the number of targeted individuals to increase over time and situation.

On the other hand, the EU also has to provide evidence that its choice is legally valid and can stand up in court for every person targeted by punitive measures.

Lithuania’s foreign minister Linas Linkevičius made a similar statement with regard to the Belarus sanctions.

“That has something to do with the EU’s credibility,” he said ahead of the talks, describing plans to sanction only 15 to 20 people in the first step as “too symbolic”. “This is definitely not enough. It is not a serious reaction.”

According to one EU diplomat, Germany is in favour of extending the list.