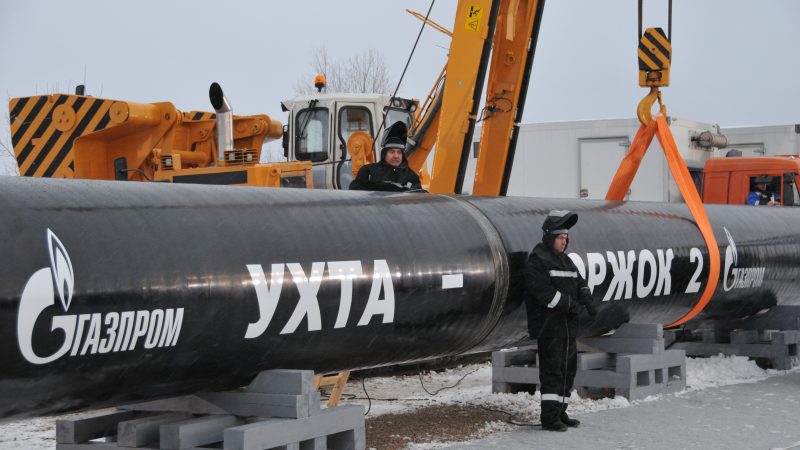 Roughly 2,200 km from Moscow, in northwestern Siberia far above the Arctic Circle, an autonomous district stretches over the Russian Yamal Peninsula. It’s bigger than Texas and has 32 natural gas fields.

Estimated gas reserves exceed 16.7 trillion cubic metres, which could allegedly be “enough for the next 100 years”, a European gas expert told EURACTIV on the ground.

One of the largest explored fields in the region, Bovanenkovo Gas Field, is estimated to have 4.9 trillion cubic metres in gas reserves, according to Russia’s state company Gazprom. It is meant to feed the controversial Nord Stream 2 pipeline, Russia’s multi-billion energy link to Europe.

According to unofficial calculations, the gas takes three or four days to reach Germany’s energy hub in Greifswald.

Between commerce and geopolitics

Half of the €9.5 billion project is financed by Gazprom, with the rest covered by its European partners: Germany’s Wintershall and Uniper, Anglo-Dutch Shell, France’s Engie and Austria’s OMV.

Although the Russian state company repeats that Nord Stream 2 is “a purely commercial, not geopolitical project,” Eastern European security concerns, the ongoing Ukraine gas spat and looming US sanctions against those involved in the project suggest otherwise.

The 1,225 km long pipeline has come under fire from Washington and a number of Eastern European, Nordic and Baltic Sea countries, who fear it will increase EU reliance on Moscow and isolate Ukraine, which it bypasses, as well as bypassing the Eastern European countries, depriving them of lucrative gas transit fees.

“If Nord Stream 2 becomes operational, Ukraine will be cut out from gas transit, losing roughly the equivalent of its defence budget each year in fees,” said Agnia Grigas, an energy and political risk expert at the Atlantic Council.

“It will free up Russia’s hand in the military campaign in Ukraine without fear of damaging the export pipeline infrastructure,” she told EURACTIV. Her view is shared throughout Europe’s security community.

During a visit to the Ukrainian capital Kyiv in mid-May, US energy secretary Rick Perry said Washington was moving towards imposing sanctions on companies involved in the project in the “not too distant future.”

Henning Kothe, chief project officer at Nord Stream 2, acknowledged to reporters during a tour of the field earlier this week, that there are “all these political discussions saying it’s a political project.

But the shortest way for gas to reach Europe is “via Nord Stream 2, which is 2,000 kilometres shorter than the existing route through Ukraine”, he added.

“That is for me a fact and not politics,” he said.

Kothe downplayed the risks of US sanctions, saying that none of the partners had left the project. However, some experts warn that the possible sanctions would barely affect the project but could put the EU on a direct collision course with Washington.

The new European gas directive, revamped earlier this year, has strengthened the role of the EU Commission as the guardian of competition and diversification on the EU energy market.

It extends the bloc’s gas liberalisation rules to cover new offshore gas pipelines from non-EU countries. It’s an effort to bring the contentious Russia-backed project under the EU’s regulatory umbrella.

Germany’s economy ministry has taken note of the threat of US sanctions against Nord Stream 2, a spokeswoman said on Wednesday (22 May), adding that Berlin rejected sanctions that have extraterritorial effect.

Chancellor Angela Merkel’s unyielding support for the project, played chiefly to the domestic business audience, has isolated Germany against many EU member states.

While US opposition to the project is ostensibly political, large commercial interests are at stake, too.

Uncertainties about the effects of the existing US sanctions on their business already occupy more than half of the German companies operating in Russia, a survey of the German-Russian Chamber of Commerce and the German Eastern Business Association (OAOEV) found.

“The new EU gas directive might lead to legal uncertainty for those companies (…) and could make Europe unattractive for investment even beyond new gas pipelines,” Achim Dercks, deputy chief executive of the Association of German Chambers of Industry and Commerce, told EURACTIV.

Could the project be stopped?

Asked if the project could indeed be stopped, Dercks said “the new European regulatory framework does not prevent the construction work from being completed.”

Legal troubles also come from elsewhere, as most of the countries involved faced a fait accompli only after the construction began.

While four countries – Finland, Sweden, Germany and Russia – have approved the pipeline’s construction, Denmark is currently the only country that has not yet issued a permit for the construction in its territorial waters.

Copenhagen has asked the Nord Stream 2 consortium to look into a southern route after the permission for a northern route has been refused due to environmental concerns.

The Nord Stream 2 consortium is currently appealing against  the Danish Energy Agency’s (DEA) request, Gazprom officials confirmed to EURACTIV. A change of the route in the Baltic Sea would entail substantial delays of the controversial project.

Gazprom and the Western companies involved in the project had hoped to complete the pipeline by the end of 2019, but Gazprom suggested on Sunday (19 May) it could go online in 2020.

Regarding deadlines, Nord Stream 2 is in competition with the Southern Gas Corridor, a EU-backed project to bring Azeri gas to Europe.

Pushing back the launch date could create considerable difficulties as the transit agreement between Kyiv and Moscow expires at the end of the year and the two countries have so far struggled to agree on the deal’s extension.

Dmitry Khandoga, deputy head of Gazprom’s external economic affairs department, said ending the year without completing Nord Stream 2 and without a transit deal with Ukraine would be a “nightmare scenario”.

“But, you know, we all know that those contracts are usually signed very close to the end of the year in December,” a Gazprom official joked alluding to a recent year’s stoppages of Russian gas flow through Ukraine in the middle of winter.

Aside from geopolitics, the Yamal Peninsula’s harsh climate beyond the Arctic Circle poses challenges on the technical and societal side of natural gas extraction in Siberia, involving climate change effects, logistics and rights of the indigenous populations.

Expansive gas and oil industry infrastructure also significantly impacts the indigenous people’s lifestyle in the region: Reindeer pastures are shrinking, herders are hindered by new pipelines, roads and railway lines and some regions, such as the Yamal Peninsula, are partly overgrazed.

Due to rising temperatures, climate experts fear that permafrost soil could start to thaw and not only cause geological shifts like craters or the release of carbon and methane as greenhouse gases that can potentially accelerate global warming, but also potential diseases hidden deep in the tundra ground.

In recent years, the region has seen several outbreaks of deadly anthrax bacteria, which is known as “Siberian plague” in Russian.

Three years ago a boy died of anthrax in the remote Yamal Peninsula, while 20 other infected people were treated and survived. Similar smaller events have been reported ever since.

Scientists believe it was triggered when unusually warm weather caused the release of the bacteria and fear that summer’s outbreak was just the beginning.

“The permafrost in the Yamal region as observed in boreholes seems to warm quite fast,” polar researcher Boris Biskaborn from the Helmholtz Centre for Polar and Marine Research in Potsdam told EURACTIV.

“Melting of ground ice can have drastic consequences for arctic landscapes and settled areas, including streets, railroad tracks, runways, buildings, and oil and gas pipelines,” he said, adding that “most of the current infrastructure in the permafrost domain is in areas with high risk for future surficial thaw of permafrost”.

Currently, the industry uses methods to cool down the gas before it is transported through the pipes. Some experts, however, suggest that at some point it will not be enough.

“Companies stating they have everything under control locally is probably fine as long as there is no overarching regional thawing trend, which we start to see and which will increasingly dominate the entire Arctic,” said Guido Grosse, head of Permafrost Research Unit at the Helmholtz Centre for Polar and Marine Research.

“We are talking about air temperature increases of up to 8°C or more –  this is not controllable with freezing pipes or such technologies, in particular not if you have massive ice in the ground,” Grosse explained.