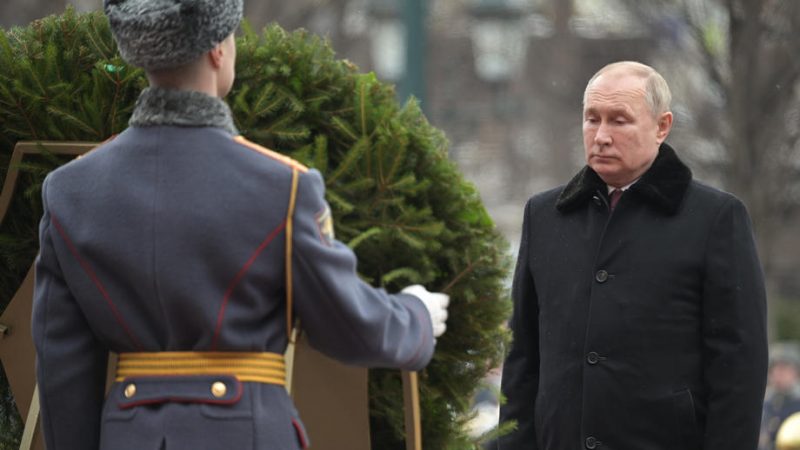 File photo. Russian President Vladimir Putin (R) attends a wreath-laying ceremony at the Tomb of the Unknown Soldier in the Alexander Garden of the Moscow's Kremlin in Moscow, Russia, 23 February 2022, during the national celebrations of the Day of Defender of the Fatherland. The Defender of the Fatherland Day is annually celebrated in Russia on 23 February. [Kremlin pool/EPA/EFE]

Russian President Vladimir Putin’s televised speech on Wednesday (23 February) in which he ordered Russian troops to start military operations in Ukraine provides another chance to judge his reasoning.

Putin’s narrative is primarily based on the thesis that the Ukrainian regime is of Nazi ideology and is committing genocide against the ethnic Russians in Ukraine.

Referring to his previous TV appearance in which he recognised the independence of the so-called republics of Donets and Lugansk, Putin said:

“As I said in my previous address, one cannot look at what is happening there without compassion. It was simply impossible to endure all this. It was necessary to stop this nightmare immediately – the genocide against the millions of people living there, who rely only on Russia, hope only on us. It was these aspirations, feelings, pain of people that were for us the main motive for deciding to recognise the people’s republics of Donbas.”

“What I think is important to emphasise further. In order to achieve their own goals, the leading NATO countries support extreme nationalists and neo-Nazis in Ukraine in everything, who, in turn, will never forgive the Crimeans and Sevastopol residents for their free choice – reunification with Russia.”

Putin also conveys the message that the Ukrainian leaders, which he calls “Hitler accomplices” have plans to re-take by force Crimea and Donbas, and at some point will use nuclear weapons. He said:

“They, of course, will climb into the Crimea, and just like in the Donbas, with a war, in order to kill, as punishers from the gangs of Ukrainian nationalists, Hitler’s accomplices, killed defenseless people during the Great Patriotic War. They openly declare that they lay claim to a number of other Russian territories.”

“The entire course of events and analysis of incoming information shows that Russia’s clash with these forces is inevitable. It is only a matter of time: they are getting ready, they are waiting for the right time. Now they also claim to possess nuclear weapons. We will not allow this to be done.”

Then Putin explained why he decided to order “a special military operation”.

“Its goal is to protect people who have been subjected to bullying and genocide by the Kyiv regime for eight years. And for this we will strive for the demilitarisation and denazification of Ukraine, as well as bringing to justice those who committed numerous, bloody crimes against civilians, including citizens of the Russian Federation.”

The US government has alluded to intelligence indicating that the Kremlin is preparing lists of Ukrainians to be killed or put in camps. The alleged lists include journalists.

One response to “In Putin’s words: Why Russia invaded Ukraine”