Turkish soldiers prepare their tanks before crossing the Syrian-Turkish border, at the Hassa district on the Turkish-Syrian border in Hatay, Turkey, 22 January 2018. [Sedat Suna/EPA/EFE]

Turkey on Monday (22 January) intensified its offensive against Kurdish militia targets in Syria as President Recep Tayyip Erdoğan vowed there would be no stepping back in a campaign that has stoked concern among Ankara’s allies and neighbours. 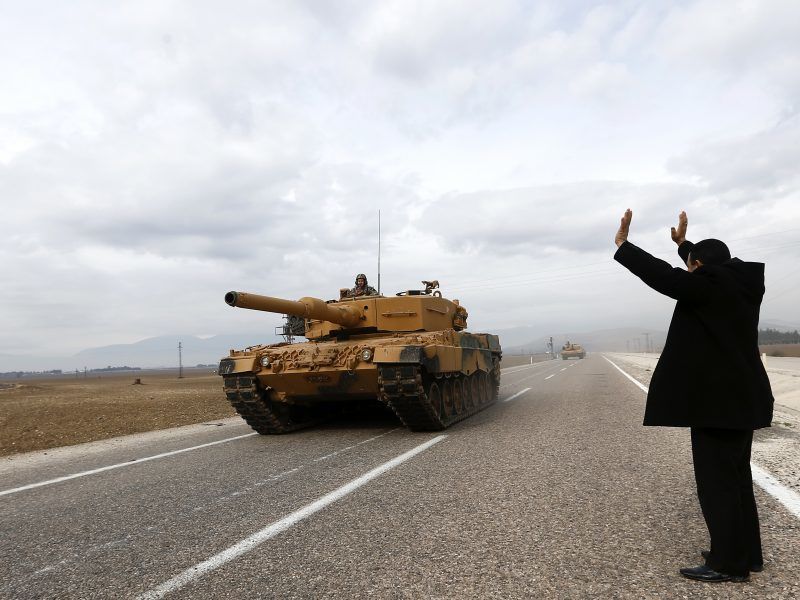 The operation, where Turkish war planes and artillery are backing a major ground incursion launched with Ankara-backed Syrian rebels and Turkish tanks, aims to oust the People’s Protection Units (YPG) militia from its enclave of Afrin.

Turkey considers the YPG to be a terror group and the Syrian offshoot of the Kurdistan Workers’ Party (PKK) which has waged a bloody three-decade insurgency against the Turkish state.

“We are determined. Afrin will be sorted out. We will take no step back,” Erdoğan said in a televised speech in Ankara.

Turkey intensifies its offensive against Kurdish militia targets in Syria as President Erdogan vows there would be no stepping back in the campaign https://t.co/sVtV9T9Ae8 pic.twitter.com/WYd80OL02V

But the operation is hugely sensitive as Washington relied on the YPG to oust Islamic State (IS) jihadists from their Syrian strongholds and the Kurdish militia now holds much of Syria’s north.

State-run news agency Anadolu said ground forces had already taken 15 villages and other locations in their advance into Syria.

Meanwhile, Turkish artillery fired shells on YPG targets inside Syria and ground troops opened a new front by moving on Afrin from the town of Azaz to the east, state media said.

The Britain-based Syrian Observatory for Human Rights said a total of 22 Syrian civilians had been killed by Turkish strikes in the operation and two more by Kurdish fire.

It said 54 Syrian combattants had been killed, including 19 Ankara-backed rebels, 26 Kurdish fighters and nine unidentified figures.

But Ankara has denied inflicting civilian casualties, with Foreign Minister Mevlüt Çavuşoğlu accusing the YPG of sending out “nonsense propaganda and baseless lies”.

Observatory director Rami Abdel Rahim told AFP in Beirut that the clashes were the fiercest since the start of the offensive. Turkey-backed forces had also taken a key hill in Afrin, both he and Anadolu said.

In a sign of the risks to Turkey, rockets fired from Syria on the border town of Reyhanli on Sunday killed one Syrian refugee. One more person was killed in a similar attack Monday on the village of Kirikhan.

The Syrian Democratic Forces, an umbrella group dominated by the YPG, said in a statement that the operation amounted to “clear support” for IS.

Turkey’s previous incursion into Syria during the war was the Euphrates Shield campaign in August 2016-March 2017 in an area to the east of Afrin, against both the YPG and IS.

Erdoğan has warned those protesting against the operation will have to pay a “heavy price”. Turkish police detained 24 people on suspicion of disseminating “terror propaganda” on social media.

But as well as a complex military task, Turkey has to wage a sensitive diplomatic campaign to avoid alienating allies and provoking foes.

Western capitals are particularly concerned that the campaign against the YPG will take the focus away from eliminating IS after a string of successes in recent months.

US Secretary of State Rex Tillerson said yesterday he was “concerned” about the offensive, saying the United States was in Syria with the aim of defeating the jihadists.

But Erdoğan expressed impatience with US demands to set a clear timetable for the operation, saying the campaign would be over “when the target is achieved”.

“How long have you been in Afghanistan? Is that over in Iraq?” he said, referring to the current US military presence in those countries which began with 2001 and 2003 invasions.

Erdoğan has previously indicated that once control is imposed onto Afrin, Turkey wants to head west to defeat the YPG in the town of Manbij.

The European Union’s diplomatic chief Federica Mogherini said she was “extremely worried” and would discuss the situation with Turkish officials.

France has called for additional talks at a UN Security Council meeting to discuss concerns over flashpoint areas in Syria including the Turkish offensive.

German Foreign Minister Sigmar Gabriel on Monday called his Turkish counterpart to express concerns about the possible impact on civilians of a Turkish offensive in northern Syria, as pressure mounted for him to reject arms sales sought by Ankara.

FM @sigmargabriel on the situation in Northern #Syria: The military confrontation between Turkey and Kurdish units entails unpredictable risks. Everyone's efforts need to aim at making progress in the political process

Gabriel told Turkey’s Çavuşoğlu he worried about the humanitarian consequences of an escalation in Syria, and both men agreed the Syrian political process should now be continued in an intensive manner, a ministry official said.

In a phone call with Turkish FM @MevlutCavusoglu @SigmarGabriel stressed his concern about escalation of the situation in #Syria and the humanitarian consequences thereof.

Gabriel is under fire from opposition lawmakers and even members of Chancellor Angela Merkel’s conservatives for failing to speak up earlier, and for moving toward approving Ankara’s request to have German arms maker Rheinmetall upgrade its German-built tanks.

German concerns about Turkey’s advance could complicate an emerging rapprochement between the NATO allies that gathered momentum when Gabriel and Çavuşoğlu met in Germany this month.

A German defence ministry spokesman on Monday confirmed that Turkey had purchased over 750 tanks from Germany in the 1980s, 1990s and late 2000s, but said he had no direct knowledge aside from photographs circulating in the media that the tanks were being used in Syria.

Foreign Ministry spokeswoman Maria Adebahr declined comment on a report in the magazine Der Spiegel that Germany was moving toward approval of a Turkish request for Rheinmetall to upgrade and modernise its Leopard tanks.

Gabriel had told reporters after meeting Çavuşoğlu that major arms sales to Turkey would remain off limits until the case of the imprisoned German-Turkish journalist Deniz Yücel was resolved, but signalled that Berlin would review Ankara’s request to add protective gear to its existing tanks.

Turkey wants to reinforce the tanks against improvised explosive devices and mines, and is also seeking a sensor system to protect them against anti-tank projectiles.

Meanwhile Russia and Iran — who have a military presence in Syria and are working with Turkey on a peace process — have also expressed concern.

Erdoğan insisted Turkey had discussed the operation in advance with Russia, and Moscow was in “agreement”.

Speaking on the 3rd day of Turkey’s military campaign into Afrin, Erdoğan has said “We’ve spoken this with our Russian friends, we have a consensus. We’ve spoken with the US as well but we couldn’t convince them" https://t.co/2CCVQjrTr1 pic.twitter.com/mWxxbEOevA

A crucial factor will be whether the operation affects a Syrian peace conference to be held in the Russian resort of Sochi in late January.

Russian Foreign Minister Sergei Lavrov said yesterday that Kurdish representatives would be invited, without specifying who, and accused the US of encouraging separatism among Syrian Kurds.