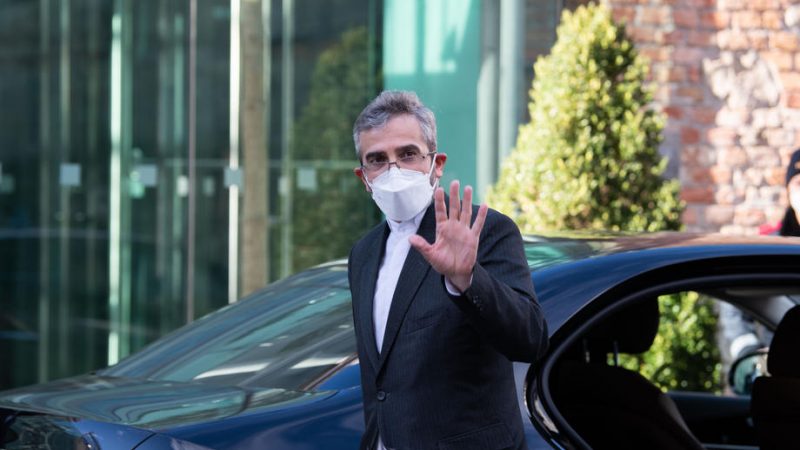 Iran's Chief Negotiator for the Nuclear Agreement, Ali Bagheri Kani arrives for a meeting in Vienna, at the Palais Coburg, Austria, 8 February 2022. Talks between the P5+1 group and Iran about the nuclear deal are continuing in Vienna. [EPA-EFE/DANIEL NOVOTNY]

Talks to revive a deal with Iran on its contested nuclear programme resumed on Tuesday (8 February) in Vienna after officials signalled an agreement was “in sight”.

The negotiations — attended by Britain, China, France, Germany, Iran, Russia and indirectly the United States — were halted at the end of last month for diplomats to return to their capitals to get further instructions.

The resumption comes after parties in recent weeks cited progress in seeking to revive the 2015 accord that was supposed to prevent Iran from acquiring an atomic bomb, a goal it has always denied pursuing.

A source close to the discussions told AFP that the delegations had arrived in the Austrian capital.

“A deal that addresses all sides’ core concerns is in sight, but if it is not reached in the coming weeks, Iran’s ongoing nuclear advances will make it impossible for us to return to the JCPOA,” a US State Department spokesperson said on Monday, referring to the 2015 framework agreement.

Speaking in Washington, the European Union’s foreign policy chief Josep Borrell said: “There is a US offer, there is a counter-offer.

“I don’t if know it’s going to be one week, two weeks, three weeks, but certainly we are in the last steps of the negotiation.”

Borrell said reaching agreement on the lifting of sanctions and the rollback of Iran’s nuclear activities was “the most important problem” but that he was hopeful of a breakthrough “because both sides have been showing willingness.”

The US, under former president Donald Trump, unilaterally withdrew from the pact in 2018 and reimposed tough economic sanctions on Iran, prompting the Islamic republic to begin pulling back from its commitments under the deal and step up its nuclear activities.

Iranian foreign ministry spokesman Saeed Khatibzadeh said on Monday that answers that “the United States brings… to Vienna will determine when we can reach an agreement”.

“We have made significant progress in various areas of the Vienna negotiations”, including on guarantees sought by Iran that the United States would not breach the deal once again, Khatibzadeh told reporters.

Experts say the Iranians have deviated so much from the restrictions laid out in the 2015 deal that they are only weeks away from having enough fissile material for an atomic weapon — though actually making one still requires further steps.

Washington has sought direct negotiations in this home stretch, but said talks remain indirect at Iran’s request. Parties have been negotiating in Vienna since last year.

Eric Brewer of US non-proliferation watchdog Nuclear Threat Initiative (NTI) said there remained “a combination of issues that require resolution”, including the scope of sanctions relief and what to do with nuclear equipment Iran has installed.

“They are the final sticking points for a reason — they are contentious and require concessions that neither side has been willing to make so far,” he said.

Russian negotiator Mikhail Ulyanov said in an interview to the Russian newspaper Kommersant that parties were “five minutes away from the finish line”.

“A draft of the final document has been crafted. There are several points there that need more work, but that document is already on the table,” he said.

German Chancellor Olaf Scholz called it “the decisive moment” in an interview with the Washington Post published on Monday.

On Friday, Washington made a gesture by announcing it was waiving sanctions on Iran’s civil nuclear programme, a technical step necessary to return to the 2015 Joint Comprehensive Plan of Action, or JCPOA.

The waiver allows other countries and companies to participate in Iran’s civil nuclear programme without triggering US sanctions, in the name of promoting safety and non-proliferation.

The move “should facilitate technical discussions necessary to support talks on JCPOA return in Vienna,” negotiators from Britain, France and Germany said in a joint statement Saturday.

For Iran, though, the move fell short with Ali Shamkhani, secretary of Iran’s Supreme National Security Council, in a tweet Tuesday accusing the Biden administration of continuing Trump’s “maximum pressure” campaign against Iran.