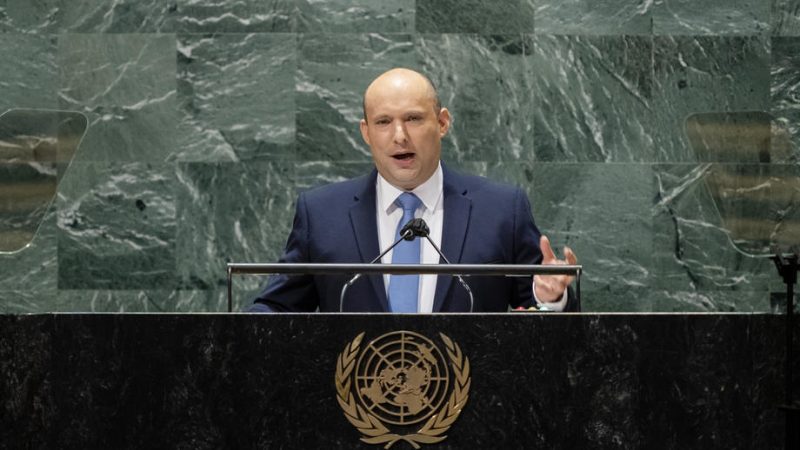 Israel’s Prime Minister Naftali Bennett said Monday (27 September) Iran had breached all the “red lines” aimed at curbing its nuclear weapons program, but that Israel “will not allow” Tehran to get the bomb.

In his first address to the United Nations General Assembly, Bennett claimed the Islamic republic had in recent years taken “a major leap forward” in its nuclear production capacity and ability to enrich weapons-grade uranium.

“Iran’s nuclear weapon program is at a critical point, all red lines have been crossed,” said Bennett, who took office in June.

“There are those in the world who seem to see Iran’s pursuit of nuclear weapons as an inevitable reality, as a done deal, or they have just become tired of hearing about it,” the 49-year-old premier told the world body.

“Israel doesn’t have that privilege. We cannot tire. We will not tire. Israel will not allow Iran to acquire a nuclear weapon.”

Israel “desperately attempts to portray Iran’s conventional weapon capabilities or its exclusively peaceful nuclear program, which is under the most robust verification of the International Atomic Energy Agency, as a challenge to regional stability,” Payman Ghadirkhomi, the second secretary for Iran’s UN mission, told the assembly.

“This is but a hypocritical move to distract attention from the real danger posed to regional peace and security by this regime, particularly its nuclear-weapon arsenals and clandestine and unsafeguarded nuclear installations and activities.”

Ghadirkhomi also slammed Israel for “hampering” the establishment of a nuclear weapon-free zone in the Middle East, as well as for its activities in the Palestinian territories.

Iran, which says its nuclear program is for civilian purposes, said Friday that it expected talks to resume soon on reviving a 2015 landmark agreement scaling back its program in exchange for sanctions relief.

The agreement started to fall apart in 2018 when the US withdrew from it and reinstated sanctions. Iran in turn again started to ramp up its nuclear activities.

Bennett’s predecessor Benjamin Netanyahu, who was in power from 2009 until June, was among the world’s fiercest critics of the accord, regularly condemning it at international forums and cheering former US president Donald Trump’s decision to withdraw.

Bennett, a foreign policy hawk who heads Israel’s ideologically disparate, eight-party coalition government, also opposes the Iran nuclear deal, but did not mention it in his UN address.

In a rare interview with a foreign media outlet, Israeli Defense Minister Benny Gantz told Foreign Policy magazine this month that the Jewish state was not necessarily opposed to US efforts to re-enter a negotiated agreement with Iran.

“The current US approach of putting the Iran nuclear program back in a box, I’d accept that,” Gantz told the magazine, in what was perceived by some Israeli experts as a policy shift.

But Gantz made clear that Israel would expect a “viable US-led plan B” to be in place should talks fail.

Bennett has not publicly expressed openness to a revived Iran deal but has criticised Netanyahu over what he termed “the gap” between the former leader’s rhetoric on Iran and reality.

He told the UN that Iran has enriched “uranium to the level of 60%, which is one step short of weapons-grade material — and they’re getting away with it.”

The United States and European Union on Monday also urged Iran to allow inspectors access to a nuclear site, while Tehran argued the facility was exempt from a recent agreement with the UN watchdog.

The Vienna-based International Atomic Energy Agency (IAEA) said it had been denied “indispensable” access to the TESA Karaj centrifuge component manufacturing workshop near Tehran, contrary to a September 12 agreement with Iran.

Iran’s ambassador to the IAEA, Kazem Gharibabadi, rejected the charge, saying the IAEA statement “isn’t accurate and goes beyond the agreed terms.”