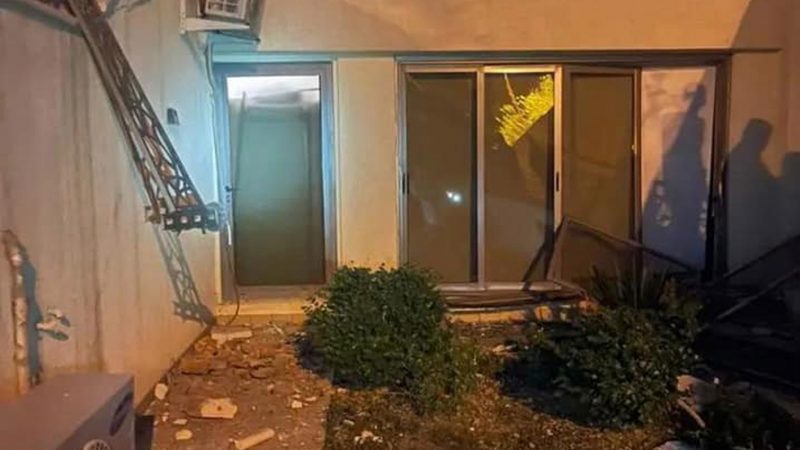 A handout photo made available by the Iraqi Prime Minister's Media Office shows the damage inside the home of Iraq's Prime Minister Mustafa al-Kadhimi after a drone attack at the heavily fortified Green Zone in Baghdad, Iraq, 7 November 2021. [Handout photo/EPA/EFE]

US President Joe Biden condemned the “terrorist attack” and said he was “relieved” Kadhemi was not injured, while Iraqi President Barham Saleh said it was an attempted “coup against the constitutional system”.

The attack has not been claimed by any group.

Kadhemi, 54, and in power since May 2020, appealed for “calm and restraint” before chairing a meeting at his office in the high-security Baghdad Green Zone, where the overnight attack took place.

Three drones were launched from near a Tigris River bridge but two were intercepted, said security sources, adding that two bodyguards were wounded.

Gunfire rang out and smoke rose from the Green Zone after the strike, which Kadhemi’s office labelled a “failed assassination attempt”.

Photos issued by Kadhemi’s office showed debris strewn on the ground below a damaged exterior stairway and a door that had been dislodged.

Kadhemi said in a short video that “my residence has been the target of a cowardly assault. Praise God, I am fine.”

The attack came two days after security forces clashed with supporters of Iran-backed parties that lost support in the 10 October parliament election, and who have charged they were the victims of vote irregularities.

The Conquest (Fatah) Alliance, the political arm of the pro-Iran Hashed al-Shaabi paramilitary network, suffered a substantial decline in seats, leading it to denounce the outcome as “fraud”.

After the drone attack, Qais al-Khazali, the head of Assaib Ahl al-Haq, one of the main pro-Iran groups of the Hashed, called for the perpetrators to be “brought to justice”.

The United States has around 2,500 troops in the country, and Biden said he had instructed his national security team “to offer all appropriate assistance to Iraq’s security forces as they investigate this attack and identify those responsible.”

NATO, as well as British Prime Minister Boris Johnson, “strongly condemned” the attack, while the European Union said the perpetrators “must be held accountable”.

UN Secretary-General António Guterres called on Iraqis “to exercise utmost restraint and reject all violence and any attempts to destabilise Iraq.”

He directed blame at the US, which led the 2003 invasion of Iraq that toppled dictator Saddam Hussein and kicked off years of sectarian conflict.

“Such incidents are in the interest of those who have violated the stability, security, independence and territorial integrity of Iraq over the past 18 years,” said Khatibzadeh.

“They have sought to achieve their sinister regional goals by creating terrorist groups that seek to cause sedition.”

Condemnation also poured in from regional powerhouse Saudi Arabia and other Gulf states, as well as neighbours Jordan and Syria, and the UN Assistance Mission for Iraq.

Moqtada Sadr, an influential Shiite Muslim preacher whose political movement was the big election winner, condemned the drone attack as “against Iraq and the Iraqi people”.

Analyst Renad Mansour of the Chatham House think tank said the attack was “clearly linked to the government formation process”.

The strike came amid soaring tensions over the elections, the fifth such vote since the 2003 US-led invasion.

Hundreds of Hashed supporters clashed with police on Friday, while protesting near the Green Zone to vent their fury over the preliminary result.

One protester died of injuries in hospital, according to a security source, while a Hashed source said two demonstrators were killed.

Several hundred supporters of pro-Iranian groups returned to the edge of the Green Zone on Saturday to protest, and some burned a portrait of the prime minister, whom they called a “criminal”.

Final election results are expected in a few weeks.

Kadhemi brought forward the ballot, originally planned for next year, in a concession to anti-government protests over endemic corruption, unemployment, failing public services and the influence of Iran.

Activists accuse the Hashed’s armed forces — whose 160,000 fighters are now integrated into Iraq’s state security forces — of being beholden to Iran and acting as an instrument of oppression against critics.

Other drone attacks in Iraq have occurred over the last few months, particularly against American interests.