Israeli Prime Minister Benjamin Netanyahu’s government approved a new settlement in the occupied West Bank on Sunday (15 September), two days ahead of a closely fought election as he seeks to boost turnout among his right-wing base.

The approval came as Netanyahu and his main opponent Benny Gantz vied to mobilise supporters.

Netanyahu has made a flurry of announcements in recent days as part of his efforts to continue his reign as Israel’s longest-serving prime minister.

On Sunday, the cabinet agreed to turn the wildcat settlement of Mevoot Yericho in the Jordan Valley into an official settlement, the premier’s office said.

All settlements are viewed as illegal under international law, but Israel distinguishes between those it has approved and those it has not.

Around 30 families live in the outpost, which was established in 1999.

Israeli settlers regularly set up caravan homes at sites in the West Bank with the hope of eventually gaining government approval as a settlement, which has repeatedly occurred.

The latest approval follows Netanyahu’s pledge last week to annex the Jordan Valley, which amounts to one-third of the West Bank, if he wins Tuesday’s elections. 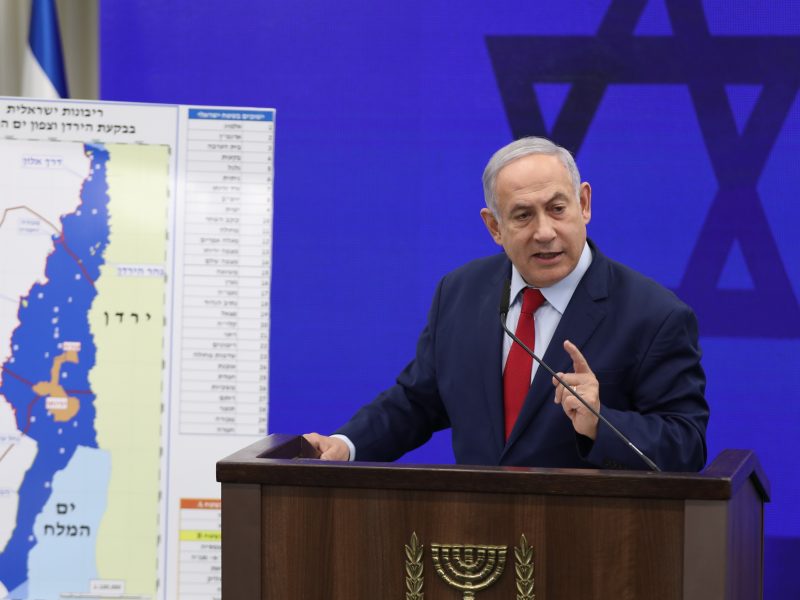 “The government passed the PM’s motion to build Mevoot Yericho,” a statement from Netanyahu’s office said as the weekly cabinet meeting was convened ceremoniously in the Jordan Valley.

Palestinian president Mahmud Abbas’s spokesman Nabil Abu Rudeineh dismissed the entire cabinet meeting as illegal and called on the international community to “stop the Israeli madness aimed at destroying all the foundations of the political process”.

Netanyahu has also said he intends to annex settlements in the wider West Bank, but in coordination with US President Donald Trump, whose long-awaited peace plan is expected to be released after the election.

The European Union and the United Nations — in addition to the Palestinians — condemned Netanyahu’s Jordan Valley announcement last week.

Netanyahu said the Jordan Valley annexation would not include Palestinian cities such as Jericho, but they would effectively be encircled by Israeli territory.

On Sunday the offices of the EU representation in Tel Aviv were vandalised, with slogand such as “EU get out” painted on the entrance door and the walls. Emanuele Giuafret, EU ambassador of Israel, twitted posting a photo, calling the incident “deplorable”. Embassies and diplomatic representations normally enjoy effective security provided by the host state.

Deplorable act of vandalism on @EUinIsrael. We expect swift results of investigation as already announced by @IsraelMFA. https://t.co/75LJOaeqHL

Netanyahu is locked in a tough re-election battle with ex-military chief Gantz and his Blue and White centrist alliance, and right-wing nationalist votes are key for his Likud.

Some 400,000 Israeli settlers now live in the West Bank alongside around 2.6 million Palestinians.

The settlements are viewed as major stumbling blocks to peace as they are built on land the Palestinians see as part of their future state.

Israel blames Palestinian violence and intransigence as the main obstacles to peace.

Beyond the cabinet approval, Netanyahu and Gantz were making last pitches to voters.

“Economic growth is at a record level, as are per capita GDP, tourism and exports. Unemployment is at an all-time low,” Netanyahu wrote in Yediot Aharonot newspaper, which gave both candidates space on the front page to express their views.

“Anyone who wants to ensure that we will continue to protect Israel, anyone who wants a strong right-wing government under my leadership, has to vote only (Likud).”

Gantz argued he can heal divisions in Israeli society that he says Netanyahu has exacerbated.

He spoke of the corruption accusations facing Netanyahu, who could be indicted in the weeks ahead, and of his readiness to form a coalition with far-right parties that could help him seek immunity from prosecution in parliament.

“I see what kind of government Netanyahu wants to form: an extremist minority government that would decide for the majority and act toward immunity for Netanyahu,” Gantz said in an interview with the Walla news site.

“There’s a new option in Israeli society — a majority government for everyone.”

Gantz held a rally in Tel Aviv, while a planned gathering of supporters for Netanyahu’s Likud party in the neighbouring town of Bat Yam was cancelled at the last moment.

The Likud party spokesman said an urgent internal party meeting had taken precedence, due to opinion polls showing a strong showing by the opposing camp.

Netanyahu, prime minister for a total of more than 13 years, is seeking to overcome one of the biggest failures of his political career following April elections.

In those polls, Likud along with its right-wing and religious allies won a majority of seats, but he failed to form a coalition government and opted for a second election as a result.

Opinion polls show results are likely to again be close.