Israeli officials furious with Schulz over water use remark 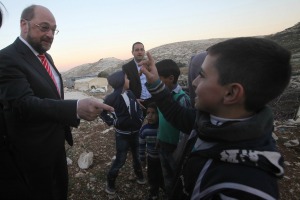 A dispute broke out in the Israeli legislature yesterday (12 February) when the European Parliament's president, Martin Schulz, suggested that Israelis were using four times more water than Palestinians.

Schulz’s visit to Israel and the Palestinian territories, where he met both with leaders and representatives of the civil society [see program], is likely to be remembered by a scandal in Israel’s Parliament, the Knesset, over a remark which apparently was not intended to cause such uproar.

In his speech, Schulz started by thanking the Knesset for allowing him to speak in German.

“I stand before you today as the German President of a multinational European Parliament. I am well aware that it is by no means self-evident that the German language should be heard in this House, and I should like to express to you my gratitude for allowing me to address you in my mother tongue,” he said.

Schulz then went on to say that having been born in 1955, he did not experience at first hand the atrocities of National Socialism, saying that the crimes committed by the Nazis were the reason he became involved in politics.

Speaking about the Holocaust, he said: “As a German who holds political office, and international political office at that, I regard it as my first duty to honour the following pledge: Never again. Never forget.”

Speaking about the Israeli-Palestinian peace process, he insisted that “painful concessions” were needed and that the Palestinians, just like the Israelis, had the right to self-determination and justice.

“One of the questions these young people asked me which I found most moving – although I could not check the exact figures – was this: how can it be that an Israeli is allowed to use 70 litres of water per day, but a Palestinian only 17,” Schulz said.

According to Deutsche Welle, this caused the Knesset to break out in turmoil. Right-wing Jewish Home Party member Moti Yogev shouted at him: "Shame on you, you support someone who incites against Jews." Yogev and Naftali Bennett, the economy minister and Jewish Home party leader, then left the hall. Bennett immediately took to his Facebook page: "I will not tolerate duplicitous propaganda against Israel in the Knesset … and especially not in German."

In his own speech to the Knesset, Benyamin Netanyahu, Israel's prime minister, weighed in to accuse Schulz of "selective listening".

Schulz said he had not checked the fact, but was told so by Palestinian youth.

"Even the Palestinian water authority says the discrepancy is much smaller," Netanyahu said. "Schulz admitted that he didn't check if what he said is true, but he still blamed us. People accept any attack on Israel without checking it. They plug their ears."

Shortly before his Knesset speech, Schulz had complained of sensitivity in Israel against criticism from Europe. "Mutual criticism is quite normal in a democracy," he told Israeli journalists. "The EU stands by its special relationship with Israel, but that does not mean that it has to agree with every decision of the Israeli government,"  Schulz said, as reported by Times of Israel.

“We think that the settlements are for sure an obstacle for the process between both sides here and they represent a real problem in the international relations of Israel with a considerable number of its partners and friends,” Schulz reportedly said.

'Personal position’ against labelling of goods

Schulz reportedly rejected the notion of an EU boycott against Israeli or even settlement products. He also briefly addressed the issue of the labelling of West Bank goods, which the EU is expected to introduce at some point in the future.

“There in an enormous pressure, also within the European Parliament, to label [products made by Jews in the West Bank] because a lot of my colleagues consider the settlements as illegal and think that the rule should be that products coming from regions with an illegal status couldn’t have a normal access to the European internal market,” he said.

Asked for his personal opinion on the matter, Schulz replied that he is not convinced that introducing such a labelling regime is the right step.

“I don’t believe that with such a rule we improve the situation here. Therefore I have not yet a conclusive opinion about that, but my feeling is always that we should opt for strong economic measures at the European Union in a moment where it is a) necessary and b) meaningful.”

Schulz said he was not sure whether such measure would ignite Israeli anger and present an obstacle to finding a peaceful solution.

“So I’m not sure how I would decide,” he said, according to the Israeli news website.

Schulz, who is the European socialists’ frontrunner to become the next Commission president, also addressed the issue of the European elections to be held in May.

He reportedly said that the European elections were likely to bring considerable gains for far-right parties, but that Jerusalem had “little reason to be concerned”.

“In that regard it is not predictable. I don’t believe that the shift to the right in the European Parliament will lead to an anti-Israel line,” he said.

The Israeli press also quotes Schulz’s spokesperson Armin Machmer saying that the Parliament’s president was surprised at the reaction following his “water remarks”.