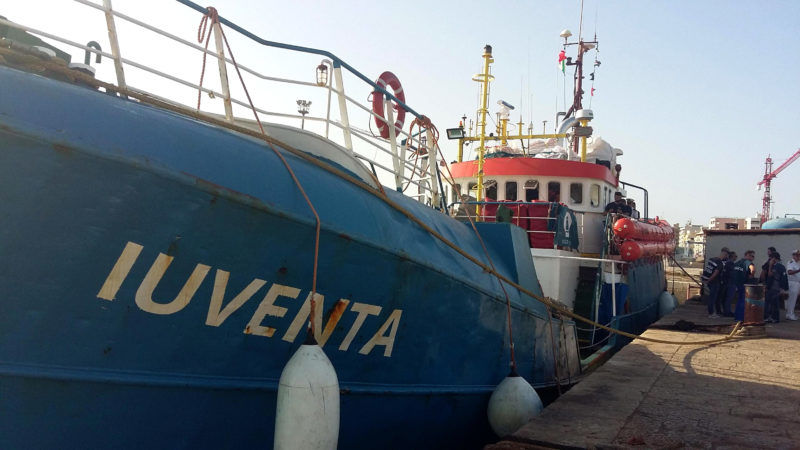 Ship 'Juventa' belonging to German NGO Jugendrette arrives at the port of Trapani, after it was seized by Italian authorities, Trapani, Sicily island, southern Italy, 4 August 2017. The ship was seized, 03 August 2017, under the orders of prosecutor of Trapani for allegedly taking several migrants onboard who were accompanied by Libyan tugboats and not in immediate danger. [Gianfranco Criscenti/EPA]

The comments from Italian Foreign Minister Angelino Alfano came as Save the Children and Sea Eye announced they were suspending operations in the area in response to the Libyan move.

Save the Children's search & rescue vessel to dock in Malta, as Libyan navy assume control of International waters https://t.co/tA6UPl4eKK

Libya’s navy last week ordered foreign vessels to stay out of a coastal “search and rescue zone” for migrants headed for Europe, saying the measure was aimed at non-governmental organisations it accuses of facilitating illegal migration.

The Libyan government “is ready to put in place a search and rescue zone in its waters, work with Europe and invest in its coastguards,” Alfano told La Stampa daily on Sunday.

“This sends a signal that the balance is being restored in the Mediterranean.”

Six years since a revolution that toppled longtime dictator Muammar Gaddafi, Libya has become a key departure point for migrants risking their lives to cross the Mediterranean to Europe.

Tens of thousands of migrants have resorted to paying people traffickers for the journey, often on overcrowded and unseaworthy boats, and charities have dispatched ships to rescue them from drowning.

But by Sunday the Aquarius, operated by the SOS Mediterranée , was the only humanitarian vessel conducting search and rescue work off Libya.

And only Spanish charity Proactiva Open Arms has said it is willing to keep operations going from Monday. Its two vessels were docked in Malta on Sunday.

Libya and Italy – where the vast majority of migrants land – have worked together to stem the flow, with Italy also moving to rein in NGOs helping the multinational rescue operations by making them sign up to a new code of conduct.

“We need a significant, I repeat a significant European economic investment in Libya and in Africa,” Alfano said.

“Europe has to decide if the theme of migration flows is an absolute priority on the same scale as the economy. For us, it is”.

The Libyan measure prompted Save the Children to suspend search and rescue work in the area and send its ship Vos Hestia to port in Malta, saying it could not resume without “vital safety and security assurances”.

“We have a duty to ensure the safety of our team and the viability of the rescue mission. We need to have these assurances in place, before we can continue with the rescue mission as intended,” Save the Children’s Operation Director Rob MacGillivray said in a statement.

The announcement from Save the Children followed a similar move by German aid group Sea Eye, which also cited security concerns.

Sea Eye said in a statement that it was with “a heavy heart” that it made its decision, after the Libyan government’s “explicit threat against the private NGOs”.

“Under these circumstances, a continuation of our rescue work is not currently possible. It would be irresponsible towards our crews,” Sea Eye founder Michael Buschheuer said.

A day earlier, Doctors Without Borders (MSF) said it was halting the use of its largest boat in the area because of an “increasingly hostile environment for lifesaving rescue operations”.

"European states and Libyan authorities are implementing a blockade on the ability of people to seek safety.” – Brice de le Vingne pic.twitter.com/K284YTRHND

Sea Eye said it has helped save some 12,000 lives since April 2016, and cautioned Sunday that the retreat of aid groups from Libya’s coast was putting lives at risk.

“We leave behind a deadly gap in the Mediterranean,” Buschheuer warned.

The number of migrant arrivals in Italy in July was down dramatically on the same month last year, suggesting efforts to train up and better equip Libya’s coastguard could already be having an impact.

Some 600,000 mostly African migrants have arrived in Italy from Libya since the start of 2014.