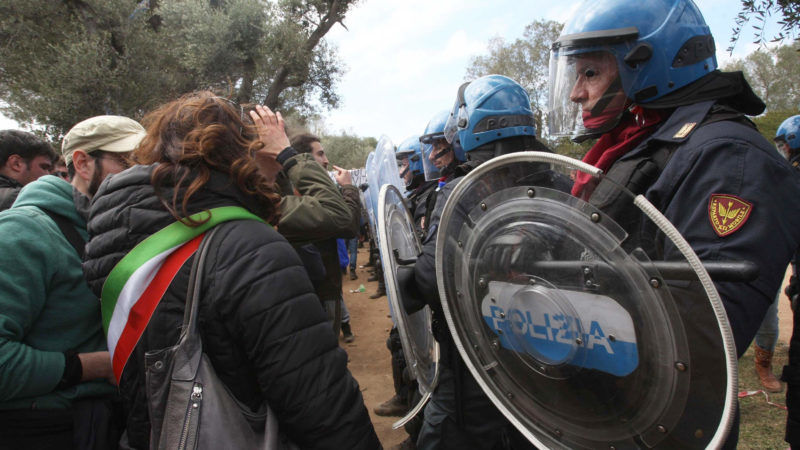 Protesters clash with riot police during a demonstration opposing the removal of olive trees near the site of the TAP pipeline project in Melendugno. Apulia, 28 March. [Claudio Longo/EPA]

Approval was given on 27 March by the Council of State, Italy’s top administrative court, arbitrating cases concerning state administration and the government.

In its ruling, the top administrative court said TAP’s environmental impact permit, awarded in 2014, met all the conditions needed.

TAP is a part of the Southern Gas Corridor which is one of the priority energy projects for the European Union.

But the next day, activists and police clashed during a protest against the construction of TAP in the Puglia region of southern Italy.

Some 300 people turned out in the village of Melendugno to denounce the removal of 211 olive trees. Protesters cite environmental concerns and fears of a detrimental impact to tourism in the area.

They have suggested that the line be moved further north to pass through the industrial city of Brindisi.

The conflict is not new. Last October, an official from SOCAR, the Azerbaijan state energy company, warned that TAP is at risk because of scepticism from the local society in southern Italy, and also probably political goals.

He explained that the pipe arriving from the sea crosses the coast underground and reaches surface eight kilometres further. This would be done by digging a micro-tunnel with the most up-to-date equipment.

The SOCAR official stressed that TAP leaves no mark on the coast and that the company in charge of the project is ready for a “titanic effort” to dig up and move the olive trees. They would be moved, together with their roots and with the soil, with special machines, and planted at another site, under the supervision of Italian scientists.

The trees will spend two years in their temporary location, and then they will be returned back to their original one. The official insisted that the pipe will be underground.