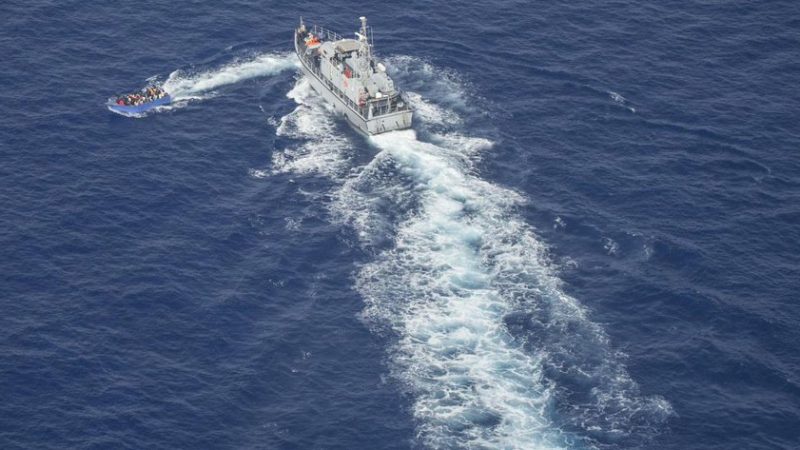 If approved, the criminal investigation would be the first of its kind in Europe, according to German rescue charity Sea-Watch, whose surveillance plane took the video and which filed the complaint.

The images filmed on 30 June appeared to show a Libyan coastguard vessel shooting at and attempting to ram the small boat in a failed bid to force it to return to Libya.

The 64 migrants on board later landed on the small Italian island of Lampedusa.

Luigi Patronaggio, head prosecutor in the Sicilian city of Agrigento, told AFP he was looking into the allegations of “attempted shipwreck”.

Patronaggio said he would, however, need “authorisation from the Italian ministry of justice” to launch an official probe, “given that the object of the proceeding is a foreign authority”.

“The alleged crime was committed in international waters, against foreigners,” he said.

He confirmed he was seeking authorisation from the ministry to pursue the case but would not be drawn on how long it might take to obtain.

Patronaggio may get the green light because the migrants — who could testify to events — landed on Lampedusa, which falls under Agrigento’s jurisdiction.

Any investigation, however, would be complicated by the fact that Italy and Libya do not have a judicial cooperation pact.

There was no immediate response from the Libyan authorities.

Sea-Watch spokeswoman Giorgia Linardi said that such a probe would be “the first time a European country has launched an investigation against the Libyan coastguard”.

“The footage speaks for itself,” she said.

“The violence to which the migrants were subjected is unacceptable and shows the need to stop aid to the so-called Libyan coastguard.”

News of the potential probe, first reported by the Italian newspaper Avvenire, comes ahead of a vote in Italy’s parliament on renewing funding for the Libyan coastguard.

Italy and the European Union have for years been financing, training and providing aid to Libya’s coastguard to stop smugglers from taking migrants and refugees in flimsy boats across the Mediterranean to Europe.

But the coastguard has faced numerous accusations of appalling mistreatment of asylum seekers, and charities and human rights groups have severely criticised the arrangement.

Under international maritime law, rescued individuals should be disembarked at a place of safety. The UN’s human rights arm says Libya cannot be considered a port of safety.

The vessel filmed bearing down on the migrant boat in the Sea-Watch video — the PB 648, Ras Jadir — is one of several patrol boats Italy has supplied to Libya.

The Libya coastguard effectively trying to sink a boat full of people in Malta's 'search and rescue' zone. Thanks to @seawatch_intl for documenting. https://t.co/N1kDKnMYr4

An Italian navy ship moored in Tripoli provides technical support to the coastguard.

“It’s the first time a Tripoli patrol boat pushed that far north in pursuit of migrants,” he said.

The Libyan coastguard returned over 13,000 people to Libya between January and June this year, surpassing the number returned in all of 2020, UNHCR says.

Nearly 900 people have perished in the Mediterranean so far this year, according to the International Organization for Migration.