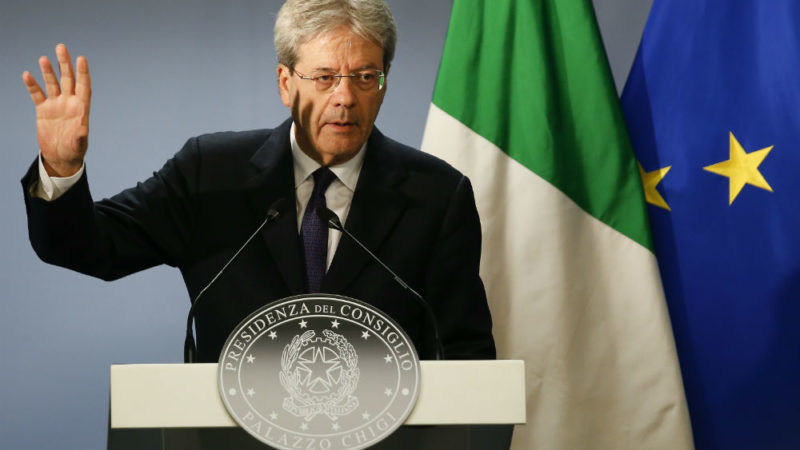 Gentiloni spoke to the Italian press in Brussels on Friday, 20 October. [Julien Warnand/EPA]

Gentiloni also pushed for redistribution of asylum seekers across the bloc.

Migration was on the agenda of the EU summit held in Brussels on 19-20 October.

Gentiloni said he was “touched, satisfied and proud” that Italy went from being the EU’s target of criticism for its treatment of refugees, into a country that “gave an exemplary response to human trafficking, that obtained important results and that must be sustained politically and financially.”

This was the result of a deal with Libya in which the EU offered Tripoli €200 million to better police its borders, something that other member states laughed at when it was first proposed but “Italy showed by its actions it was possible”, Gentiloni told reporters on Friday after the summit.

Migratory flows to Italy through the central Mediterranean route connecting Libyan port of Agadez to Sicily dropped by 38% in one year, said Gentiloni. The recorded arrivals on Italy’s shores had been rising until July 2017, when they suddenly dropped dramatically.

The deal with Libya raised doubts about whether the African country thorn by in-fighting between different factions would be able to handle a growing mass of migrants stopped at its shore, and how.

In August Associated Press exposed the vexation of migrants by the very human traffickers that now became their wardens.

In a recent letter, the Council of Europe’s commissioner for human rights Nils Muiznieks asked the Italian government to clarify the nature of its operations, worried that “handing over individuals to the Libyan authorities or other groups in Libya would expose them to a real risk of torture or degrading treatment or punishment”., and reminding the Italian government that “the fact that such actions would be carried out in Libyan territorial waters does not absolve Italy.”

Muiznieks also reminded Rome that “the fact that such actions would be carried out in Libyan territorial waters does not absolve Italy.”

EU leaders discussed the need to finance the Africa trust fund – an EU initiative to address the root causes of migration by encouraging growth and employment in source countries.

However, EU leaders made “limited offers”, Gentiloni said. “I hope more offers will be forthcoming without the need to reiterate demands,” he said, referring to the Council in December.

The Africa fund has been criticised for prioritising a reduction in migrant flows over long-term development goals.

Italian PM called for an EU mission on Niger’s border with Libya, an initiative he shares with Germany and hopes to extend to France.

The EU countries are evaluating the opportunity to strengthen the border through “technological measures and extremely limited numbers of personnel on the ground.”

Gentiloni said he spoke with EU Commission chief Jean-Claude Juncker on the need to change the Dublin regulation, whereby asylum seekers must apply for asylum in the first safe country – a situation that penalises coastal states like Italy and Greece, which have been bearing the brunt of the migrant crisis.

On Thursday MEPs voted in favour of compulsory migrant quotas, a proposal to share responsibility across the bloc that has so far been opposed by a group of migrant-hostile states led by Hungary.

“The vote [in the LIBE Committee] was an excellent contribution, a step forward. Italy is earning the right to have a decisive vote on this issue.”

Commenting on the vote, Council President Donald Tusk said on Thursday that  obligatory migrant quotas “have no future.”

“The discussion is ongoing, but if I said it was near a solution, I would be lying,” concluded Gentiloni.