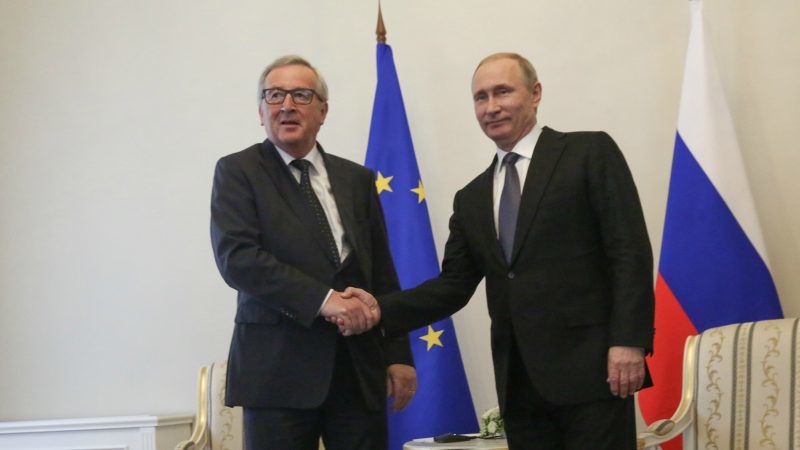 Juncker and Putin on 16 June 2016 in St Petersburg [Commission]

“I have always argued that positive relations between the European Union and Russian Federation are crucial to the security of our continent,” Juncker said in a congratulatory letter to the Russian president.

Congratulations on your re-election, President #Putin. I have always argued that positive relations between the #EU and #Russia are crucial to the #security of our continent. Our objective should be to re-establish a cooperative pan-European security order. pic.twitter.com/PiEGg56DBN

“Our common objective should be to re-establish a cooperative pan-European security order,” said the letter released by Juncker’s spokesman.

Juncker added: “I hope that you will use your fourth term in office to pursue this goal. I will always be a partner in this endeavour.”

His congratulatory missive came a day after EU foreign ministers on Monday offered Britain “unqualified solidarity” in a dispute with Russia.

Jean-Claude Juncker has written to Vladimir Putin congratulating him on his election victory. Talks of need for 'positive relations' between the EU and Russia and says he'll 'always be a partner' on security. No mention of Salisbury, Ukraine, cyber attacks or vote irregularities. pic.twitter.com/VmZU67o3jz

British Prime Minister Theresa May said her government believes that Russia was behind the March 4 poisoning of former double agent Sergei Skripal in the English city of Salisbury.

“The European Union takes extremely seriously the UK government’s assessment that it is highly likely that the Russian Federation is responsible,” the EU foreign ministers’s statement said.

The Kremlin has denied the charge, demanding London either come up with proof of Russia’s involvement or apologise.

EU sources say some states, including Greece, have been reluctant to put pressure on Moscow over the incident.

The nerve agent attack is expected to be discussed at an EU summit in Brussels starting on Thursday.

The EU has been increasingly concerned with a more assertive Russia in the past few years, especially after Moscow annexed Ukraine in 2014, triggering the first in a series of European sanctions.

But Juncker has kept doors open, even if he came under criticism for going to Russia at a Davos-style St Petersburg forum in June 2016.

A visit to Russia next month by the head of the European Union’s executive branch, Jean-Claude Juncker, is not inconsistent with the bloc’s sanctions policy towards Moscow over its role in the conflict in Ukraine, a spokesman said today (30 May).

What does Putin have on Juncker? https://t.co/CY0HtZEnXu