Kerry in Moscow: US, Russia say will cooperate on climate 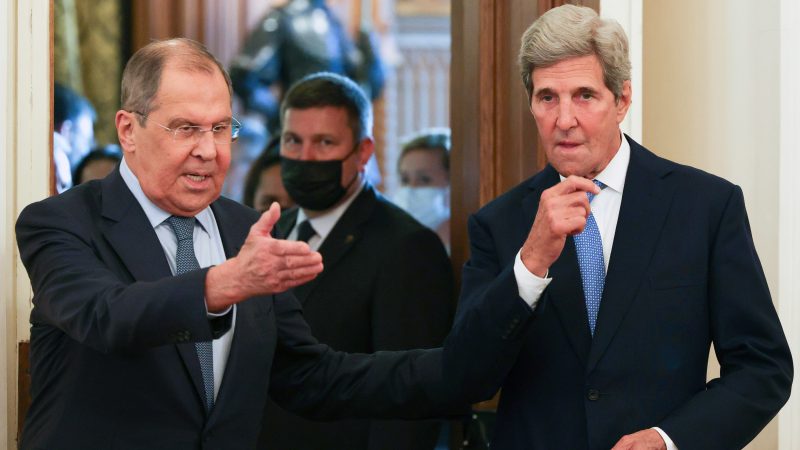 US and Russia said on Monday (12 July) they would cooperate on climate change despite strained relations, during a visit to Moscow by US climate envoy John Kerry.

Kerry, the former secretary of state who has become US President Joe Biden’s globe-trotting climate envoy, said “the stakes could not be higher” as he met with Foreign Minister Sergei Lavrov.

“We spent years, you and I, negotiating on wars, on chemical weapons, on nuclear weapons, I would say without any reservation this is absolutely as critical, as urgent an initiative,” Kerry said.

Lavrov said Russia expects “close cooperation” with the US at a COP26 conference in November in Glasgow, adding that Moscow “highly values the importance of the problems on climate change” and that Kerry’s three-day visit to be “very timely.”

Russia’s top diplomat also said that Kerry’s visit was a “very important and positive” step “to alleviate tensions” between the two countries.

Russia, one of the world’s major producers of oil and gas, has in recent years made commitments and statements suggesting it is taking climate change seriously.

But critics say the country, which is also the fourth-highest emitter of carbon, is still doing far from enough to tackle the crisis.

For years Putin was notorious for his scepticism about man-made global warming and saying Russia stands to benefit from it.

He has made the development of Russia’s Arctic region a strategic priority as ice cover melts and the Northern Sea Route becomes more accessible, which Moscow aims to use in exporting hydrocarbons to Asia.

But in recent months he has also made statements to the effect that climate change is not just a boon to Moscow.

At his annual state of the nation address in April, Putin said Russia must adapt to climate change.

During a summit with US counterpart Biden in Geneva, Putin also said Moscow was interested in “stepping up international cooperation” on climate change.

Climate change is one of the few areas in which the United States and the European Union have said they are ready to engage with Russia amid high tensions.

Kerry, a former senator who served as secretary of state under President Barack Obama, has said the several months will be critical in shoring up support to upgrade commitments in the 2015 Paris Agreement.