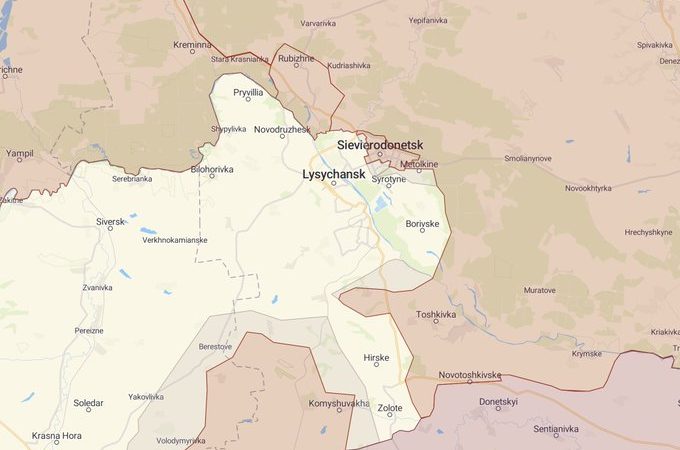 The twin cities of Severodonetsk and Lysychansk where the Russian army has concentrated attacks in recent days. [Twitter]

Moscow’s troops have been pummelling eastern Ukraine for weeks and are slowly advancing, despite fierce resistance from the outgunned Ukrainian military.

With President Vladimir Putin’s forces tightening their grip on the strategically important city of Severodonetsk in the Donbas, its twin city of Lysychansk is now coming under heavier bombardment.

“The Russian army is massively shelling Lysychansk,” Sergiy Gaiday, governor of the Lugansk region, which includes both cities, wrote on Telegram on Tuesday (21 June).

“They are just destroying everything there… They destroyed buildings and unfortunately there are casualties.”

Not good at all — Russians have made some dangerous territorial gains south of Lysychansk, getting further to closing the Zolote pocket and also threatening the Severodonetsk grouping’s rear.
The fight continues. pic.twitter.com/hU9JgvIUvH

Russian forces have been occupying villages in the area, and taking control of the two cities would give Moscow control of the whole of Lugansk, allowing them to press further into the Donbas.

After being pushed back from Kyiv and other parts of Ukraine following their February invasion, Moscow is seeking to seize a vast eastern swathe of the country.

In Lysychansk, a Russian strike had left a gaping hole in a police station, and damaged nearby apartment blocks, according to AFP journalists in the city.

The direct hit on the station, on Monday night, wounded 20 police officers, according to authorities.

“Partition walls fell down and the doors were blown out,” said a policeman who gave his nickname as Petrovich, showing the damage to the building.

“The Russian army is deaf to any rationality. It simply destroys, simply kills,” he said.

Fifteen people were killed by Russian shelling in Kharkiv Tuesday, its governor said.

Away from the battlefield, Moscow was locked in an increasingly bitter dispute with EU member Lithuania over the country’s restrictions on rail traffic to the Russian outpost of Kaliningrad.

The territory is around 1,600 kilometres from Moscow, bordering Lithuania and Poland. 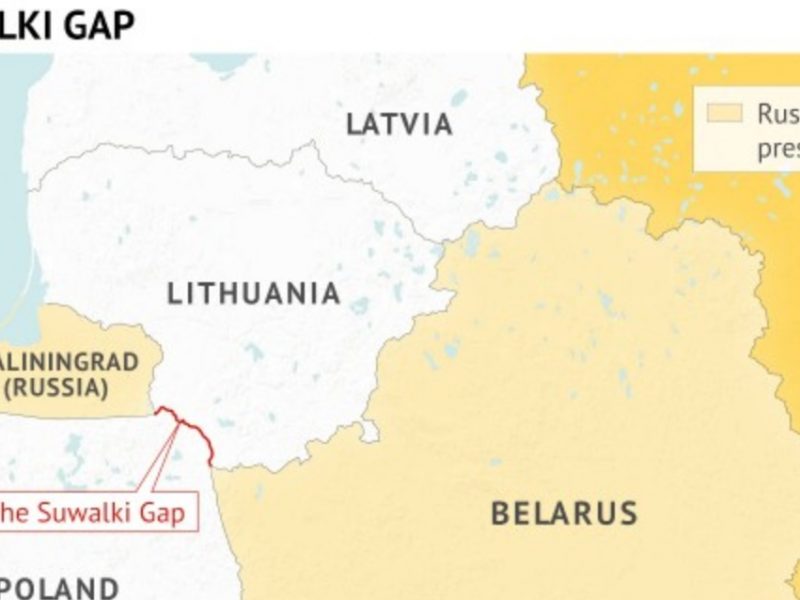 Lithuania has partly closed rail transit of Russian goods to and from its exclave of Kaliningrad, saying it was enacting EU sanctions but the move has angered Moscow, who promised to react, igniting fears over the so-called Suwałki Gap. LRT, a partner of EURACTIV in Lithuania, has contributed an explainer about the issue.

By blocking goods arriving from Russia, Lithuania says it is simply adhering to European Union-wide sanctions on Moscow.

But Moscow accused Brussels of an “escalation” and summoned the EU’s ambassador to Russia.

The United States made clear its commitment to Lithuania as an ally in NATO, which considers an attack against one member an attack on all.

“We stand by our NATO allies and we stand by Lithuania,” State Department spokesman Ned Price told reporters in Washington.

Two other Americans were captured last week in eastern Ukraine.

A White House spokesman, John Kirby, voiced alarm at Russian statements that it would not apply the Geneva Conventions on the humane treatment of prisoners to the pair.

“It’s appalling that a public official in Russia would even suggest the death penalty for two American citizens that were in Ukraine,” Kirby told reporters.

Ukraine has been seeking membership in the European Union after earlier failing to join NATO.

Ministers on Tuesday were united in granting candidate status to Ukraine as well as Moldova before a formal greenlight later this week, said France’s Europe minister, Clement Beaune, whose country holds the EU’s rotating presidency. 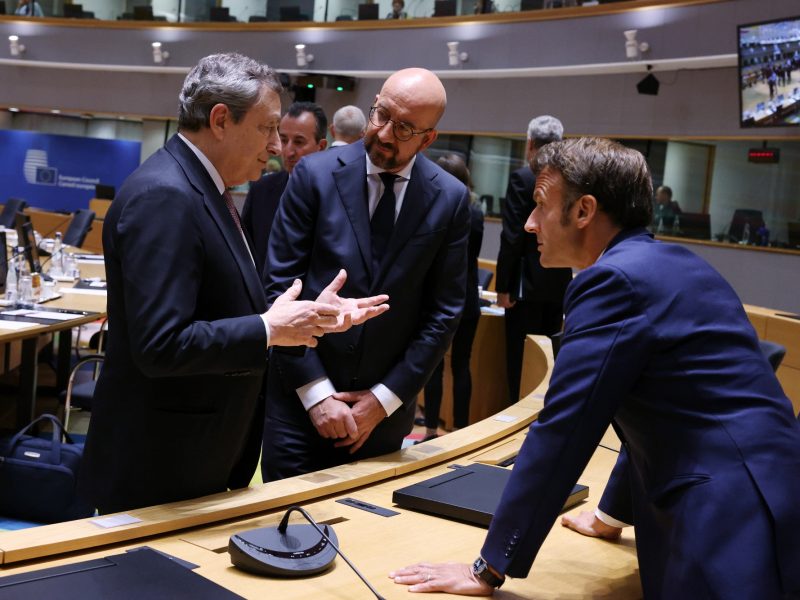 Zelenskyy, who has found hero status in Europe for resisting the invasion, said that he was working the phones to drum up support for EU membership.

“I will do everything for a historic decision of the European Union to be approved. It is important for us,” he said.

Western nations have been pumping billions of dollars of weapons into Ukraine, where Defence Minister Oleksiy Reznikov tweeted that powerful German-made Panzerhaubitze 2000 howitzer artillery had reached his country’s forces.

But Zelenskyy reiterated Ukrainian calls for faster deliveries of weapons.

“We fight every day for the supply of modern weapons for our country,” he said in his daily address. “The lives of thousands of people depend directly on the speed of our partners.”

Ukraine meanwhile said it struck a Black Sea oil drilling platform off the Crimea peninsula because Russia was using it as a military installation.

Ukraine, its Western backers and the International Criminal Court have all vowed to seek accountability over the war.

“There is no place to hide,” Garland said.