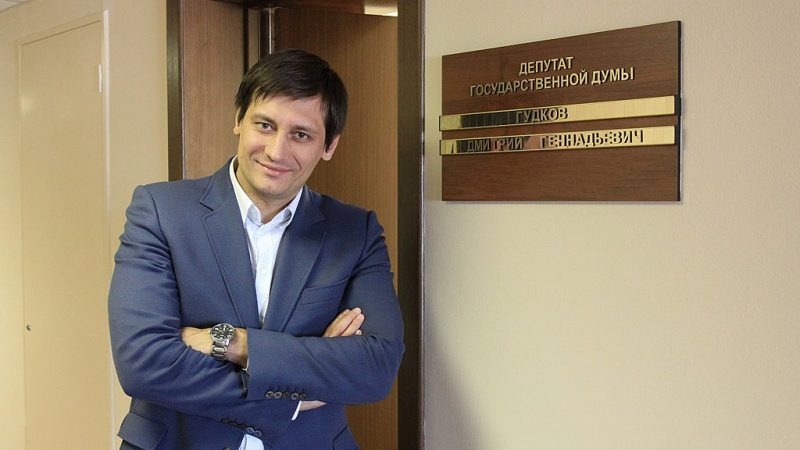 Prominent Kremlin critic Dmitry Gudkov was detained and faced possible jail time Tuesday (1 May) as authorities ramped up pressure on dissenters ahead of upcoming parliamentary elections.

Gudkov’s arrest came after police late Monday detained another Kremlin opponent, Andrei Pivovarov, after stopping his foreign-bound plane as it taxied down a runway and yanking him off the flight.

No need for hijacking: Russian authorities detained Andrey Pivovarov, former executive director of Open Russia Civic Movement, a pro-democracy organization, as he was about to disembark on an international flight. They deem his organization “undesirable." https://t.co/J4kpNvVmSf pic.twitter.com/b6kLOKfebs

The detentions of Gudkov, 41, and Pivovarov, 39, were the latest in what Kremlin critics have described as a campaign of intimidation against President Vladimir Putin’s foes ahead of parliamentary elections in September.

“Dmitry Gudkov has been arrested,” his father Gennady Gudkov said on Twitter, adding he had been detained over unpaid rent from 2015.

“Vindictive and petty villains have captured my country and are destroying normal people,” said Gennady Gudkov, a former opposition lawmaker.

Dmitry Gudkov faces up to five years in prison if convicted.

Earlier in the day police conducted searches at his country house outside Moscow as well as the homes of his allies and relatives.

“I don’t know what the formal reason (for the searches) is. The real one is clear,” he said on messaging app Telegram earlier Tuesday.

On Monday, police detained fellow activist Pivovarov pulling him off the Warsaw-bound plane in Saint Petersburg.

Pivovarov’s removal from the plane came after authorities in Belarus on May 23 diverted an EU airliner to Minsk to arrest a dissident on board, provoking an international outcry.

Pivovarov, the former executive director of Open Russia, a recently disbanded pro-democracy group, said the plane was taxiing toward take-off when it turned back.

Police searched his Saint Petersburg apartment overnight and a criminal probe was launched against the activist for cooperating with an “undesirable organisation,” Pivovarov’s team said on Facebook.

Pivovarov faces up to six years in prison if convicted.

On Tuesday, Pivovarov was moved to the southern city of Krasnodar where the criminal probe was launched.

The Krasnodar branch of the Investigative Committee, which probes major cases, said in a statement that Pivovarov had in August 2020 published materials in support of an “undesirable organisation.”

The statement also accused the activist of attempting to flee from investigators on Monday.

Open Russia, founded by self-exiled Putin critic Mikhail Khodorkovsky, announced last week it was shutting down to shield its members from prosecution.

The group was designated an “undesirable” organisation in Russia in 2017 in line with a law targeting foreign-funded groups accused of political meddling.

The European Union called for Pivovarov’s immediate release and said his case “confirms a continuous pattern of shrinking space for civil society, the opposition and critical voices as well as independent media” in Russia.

“In spite of its recent self-dissolution to prevent the authorities from targeting its members, the witch-hunt against Open Russia continues,” Natalia Zviagina, Amnesty director in Russia, said in a statement.

“Andrei Pivovarov must be immediately released.”

Polish airline LOT, which operated Pivovarov’s flight, said the plane was taxiing when Russian air traffic control ordered the crew to return to the parking position.

Poland said it was looking into the issue.

“This is an unusual action because if the Russians wanted to detain this person they could have done so before boarding. The question is why it was done exactly at that moment,” Deputy Foreign Minister Piotr Wawrzyk told state broadcaster TVP.

“The standards of the civilised world do not apply there.”

Putin’s leading domestic opponent, Alexei Navalny, was sentenced in February to two-and-a-half years in a penal colony on old fraud charges that he says are politically motivated, and authorities are gearing up to outlaw his political network.

Navalny’s Anti-Corruption Foundation said that the Russian authorities had “opted for the toughest scenario” ahead of the September parliamentary polls.

“They are removing everyone from the political arena,” the foundation said.