Russian foreign minister Sergey Lavrov reacts during a UN Security Council meeting on the sidelines of the 73rd session of the General Assembly of the United Nations at United Nations Headquarters in New York, New York, USA, 27 September 2018. [Jason Szenes/EPA/EFE]

The Kremlin on Thursday (27 September) cast doubt on photographs that appeared to show a suspect in the Skripal poisoning case was a Russian intelligence officer, saying that “many people look alike.”

British officials have released surveillance footage of two men they said flew from Russia to Britain using fake passports and then used a nerve agent hidden in a vial of perfume that poisoned Russian former spy Sergei Skripal and his daughter.

The Bellingcat investigative website this week published a photograph which it identified as Russian military intelligence colonel Anatoliy Chepiga — challenging the Kremlin account that the two men were civilians in Britain on a sightseeing visit.

FROM HERO TO ZERO: Now we know who "Ruslan Boshirov" is. https://t.co/xBZ33HGkDV

Asked about the Bellingcat report on a regular conference call with reporters on Thursday, Kremlin spokesman Dmitry Peskov said: “Many people look alike, but I cannot tell you who this citizen who was pointed out in this investigation is.”

Russian President Vladimir Putin previously said the two men shown in British surveillance footage near Skripal’s home in the English city of Salisbury were civilians and there was nothing criminal about their activity. 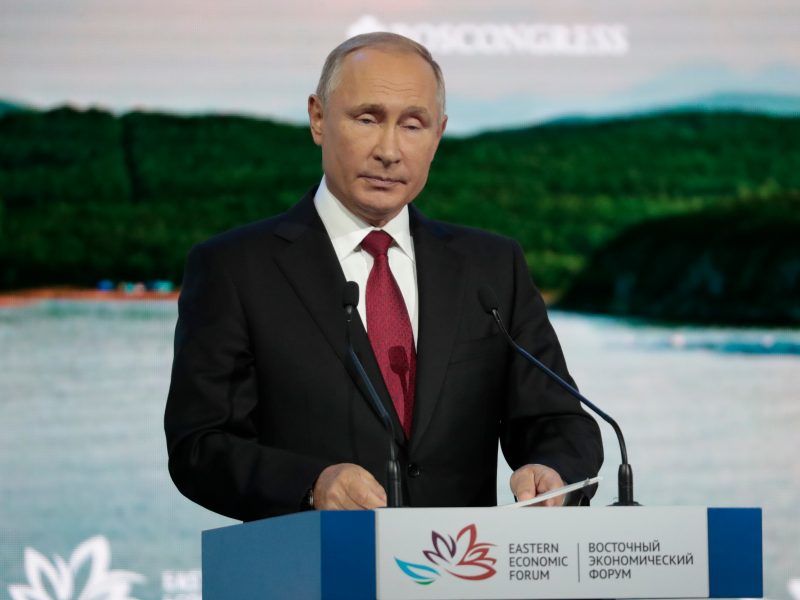 Asked on Thursday to comment on Putin’s words in the light of the new information, Peskov said: “The president said that these people were civilians. Thus, he voiced the information that he had received … You and I know nothing about these people’s past, it is outside our (job) function.”

He said Russian officials would look into the information brought to light by the Bellingcat report.

Chepiga has been designated a Hero of the Russian Federation, one of Russia’s highest honours, according to the website of the military academy he attended and photographs of a memorial on which his name is inscribed.

“We will check the lists of honourees,” Peskov said.

Sergei Skripal, a Russian ex-spy who leaked secrets to Western intelligence, was found slumped on a public bench in Salisbury on 4 March, alongside his daughter, Yulia. They were in a coma for weeks.

The Skripal poisoning has deepened Russia’s international isolation. Britain accused it of using a military-grade chemical weapon on its soil and Washington, rallying to London’s support, has warned it will impose new sanctions on Russia.

Moscow has denied any involvement in the Skripal poisoning, saying Western states are gripped by “Russophobia” and that British authorities have failed to produce any evidence.

British foreign minister Jeremy Hunt said on Thursday he had spoken about the poisoning to his Russian counterpart Sergei Lavrov at the United Nations General Assembly in New York.

Hunt told Sky News he had a frank exchange of views with Lavrov, and said Russia may be privately regretting its actions. “They paid a very high diplomatic price,” he said.

In an interview broadcast on Russian state television earlier this month, two Russian men said they were Ruslan Boshirov and Alexander Petrov – the aliases Britain said were used by the suspects in the Skripal poisoning.

They denied any connection to the poisoning, saying they were friends who worked in the health supplements business and went to Salisbury to see its gothic cathedral.

The report by Bellingcat published this week cited what it said was an official Russian passport dossier for Chepiga, which included his photograph. It bore a close resemblance to the man in the British surveillance footage using the name Ruslan Boshirov.

According to the Bellingcat report, Chepiga was born in 1979 in a village in the far east of Russia, and studied at the elite Far-Eastern Military Command Academy.

It said he served in a special forces brigade under the command of Russian military intelligence, and went on several missions to the Russian region of Chechnya, where Moscow was fighting an Islamist insurgency.

It said he received the Hero of Russia award in 2014, the year Russian military intelligence took part in clandestine operations on Ukrainian territory. The citation on his old academy’s website did not give any details of why he was given the award.

Read Bellingcat's methodology. No prior intel that Chepiga was Boshirov. They trawled a database of photos of GRU officers about the right age until they found one that looks a bit like him – photo on the left. Guess what – it looks a bit like him. Except nose and skull shape. pic.twitter.com/M2pcgDD4pu