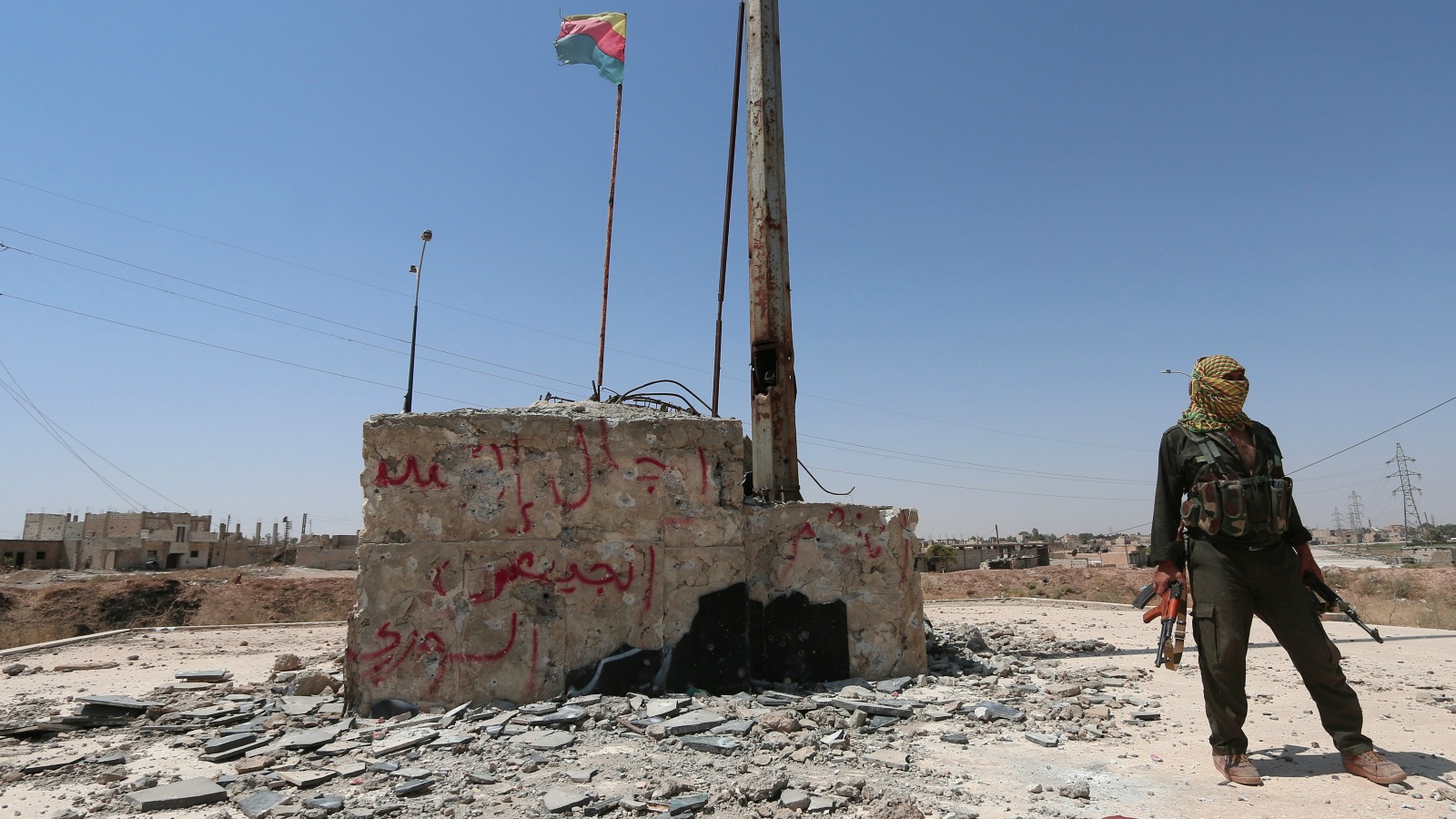 A Kurdish fighter stands with his weapons near a fluttering Kurdish flag in the Ghwairan neighborhood of Hasaka, Syria, 23 August. [Reuters]

Kurdish-backed militias in Syria agreed yesterday (30 August) to a US initiative to stop fighting Turkish forces whose week-old incursion in the country has stoked tensions between Washington and Ankara.

The truce was announced separately by a senior US defence official in Washington and the Kurdish-backed Syrian fighters, but Turkey neither confirmed nor denied it had agreed to hold fire.

Turkey launched an unprecedented cross-border offensive into Syria last Wednesday, saying it was aimed at ridding the frontier of both Islamic State group jihadists and a Kurdish militia.

Turkey’s army and its allies thrust deeper into Syria yesterday (28 August), seizing territory controlled by Kurdish-aligned forces on the fifth day of a cross-border campaign that a monitoring group said had killed at least 35 villagers.

Islamic State said Tuesday its spokesman Abu Mohamed al-Adnani was killed in the Syrian province of Aleppo, as the US confirmed a “senior leader” from the group was targeted in the same area.

Kurds have carved out a semi-autonomous region in Syria’s north and northeast, with their People’s Protection Units (YPG) becoming a key partner of the US-led coalition fighting IS.

The YPG is also a key component of the Syrian Democratic Forces (SDF), which groups diverse factions battling the jihadists.

Ankara fears the emergence of an autonomous Kurdish region in Syria would bolster the rebel Kurdistan Workers’ Party (PKK) across the border in southeastern Turkey.

At the weekend Turkish forces killed several Kurdish fighters while its tanks rolled across the border to help Syrian Arab rebels rout IS from the frontier district of Jarabulus.

The military operation triggered alarm bells in Washington, which is trying to contain the violence between its Turkish and Kurdish allies.

On a visit to Ankara on 24 August, US Vice President Joe Biden made it clear that the US new position is that the Syrian Kurdish forces must return to east of the Euphrates river after seizing control of the Syrian town of Manbij.

“In the last several hours, we have received assurance that all parties involved are going to stop shooting at each other and focus on the ISIL threat,” US Central Command spokesman, Colonel John Thomas, said using an acronym for IS.

“It’s a loose agreement for at least the next couple of days and we are hoping that will solidify” Thomas said.

He said the Turkish and SDF had opened communications with the United States and between each other “with the goal of limiting hostilities”.

The Kurdish-backed Jarablus Military Council supported by the SDF confirmed a truce had been reached.

“We agreed on a ceasefire with the Turkish state via the United States and the international coalition” that is fighting IS, said council spokesman Ali Hajo.

Speaking to AFP by telephone, Hajo said the truce took effect at midnight (2100 GMT Monday) and was expected to last “for an unspecified period of time”.

“We are continuing to negotiate (with the Turkish forces) through the Americans,” he said without elaborating.

The Britain-based Syrian Observatory for Human Rights monitor reported calm Tuesday on the southern front of Jarablus, which Turkish forces captured from IS jihadists last week on the first day of their incursion.

But Turkey neither confirmed nor denied the claim, saying only it awaited the fulfullment of a Kurdish promise to the United States to retreat east of the Euphrates river “as soon as possible”.

Deputy Prime Minister Numan Kurtulmus confirmed Monday the army aimed to prevent the creation of a Kurdish-controlled corridor running nearly the entire length of the border.

Ankara sees the YPG as a “terrorist” offshoot of the Kurdistan Workers’ Party and fears an autonomous Kurdish region in Syria would bolster the PKK in southeast Turkey.

Also on Monday, Turkey warned it would carry out more strikes on the US-backed YPG in Syria if it fails to retreat from the border area.

But analysts said further Turkish involvement in Syria’s five-year war and clashes with the YPG were fraught with risks and could stoke tensions with NATO ally Washington.

Defending a buffer zone between Kurdish-controlled areas on either side of the Euphrates could suck Turkey deeper into the conflict, said Aykan Erdemir, a senior fellow at the Washington-based Foundation for Defense of Democracies.

“Ultimately, Syria could yet turn into a territorial extension of the protracted fighting between Turkey and the PKK going on since 1984,” he said.

The PKK has waged a deadly insurgency on Turkish territory for more than three decades.

“It is hard to see how this does not get messy,” the European Council on Foreign Relations wrote in a paper, referring to the situation in northern Syria.

Turkey wants the US to drop its support for the Kurdish rebels in Syria, in their fight against Islamic State.

The Kurdish Democratic Union Party (PYD) and its militia forces, the People’s Protection Units (YPG) have acted as ground forces for the US-led airstrikes, since 2014. Military analysts regard the YPG as the most effective regional militia fighting Islamic State, and the Western alliance has sought to bolster the YPG, providing it with arms and advisors, in lieu of formally committing ground forces to Syria.

The Kurdish effort to create an autonomous state in eastern Syria, dubbed ‘Rojava’ has turned the YPG into icons for the left in the West, as the militia has sought to create a multiethnic socialist enclave in the region, and attracted hundreds of foreign fighters, including former US and UK servicemen, leftwing European activists, and even Israelis. Contra Ankara, the PYD have paid lip service to Assad, claiming that it is seeking autonomy, not independence.

However, Turkey sees the PYD as a branch of the Kurdistan Workers’ Party (PKK), which is considered to be a terrorist organisation both by the US and the EU. Similar to the situation during the US invasion of Iraq, the Syrian war has helped the PKK to bolster its power and try to build a state, Tukey claims, putting US-Turkish ties to the test, as both sides have collided over Washington’s support for the Kurds.