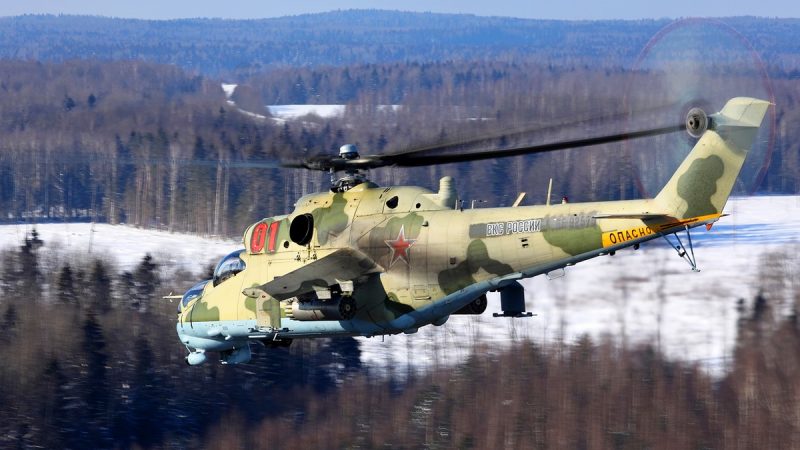 A Russian army helicopter pictured in a tweet from the Russian MOD illustrating exercises in the Smolensk region, where Latvian inspectors were denied inspections under the pretext of challenges posed by the Covid-19 pandemic. [MoD Russia, Twitter]

Latvia’s defence ministry on Tuesday (25 January) accused Moscow of using the “pretext” of COVID to cancel a scheduled arms inspection in two regions in western Russia this week.

The ministry said Latvian officers had been due to visit the Bryansk and Smolensk regions, close to the Russian border with Belarus, as part of routine inspections between members of the Organisation for Security and Co-operation in Europe (OSCE).

“Russia canceled a pre-planned OSCE arms control inspection by Latvian representatives under the pretext of challenges posed by the COVID-19 pandemic,” the ministry said in a tweet.

In a statement, the Latvian ministry also pointed out that “Russia’s Defence Ministry has also issued a false statement on its webpage about the arrival of four Latvian inspectors on 24 January”.

The Latvian ministry also reminds that the pandemic “the  formal reason for declining inspection was difficult situation with COVID-19, but that has not prevented Russia form putting massive enlisting and military manoeuvre plan in motion at the same time”.

Also on Tuesday, the Russian ministry of defense published photos of military exercises with the participation of aviation being held in the region of Smolensk.

Another tweet from the same area shows exercises with what appear to be surface-to air missiles.

According to Western officials, the Kremlin has already deployed more than 100,000 troops on Ukraine’s borders, with reinforcements arriving from all over Russia.

The United States and its EU allies accuse Russia of seeking to upend European stability by threatening an invasion of Ukraine, a former Soviet republic striving to join NATO and other Western institutions.

Russia’s defence ministry made no official comment on the inspection but a ministry official, who spoke on condition of anonymity, told AFP that “all of Europe has cancelled inspections” due to COVID.

An OSCE spokesperson said that “most participating states postponed verification activities at the beginning of the COVID-19 pandemic”.

But the spokesperson added that “since 2021 more than half of the states have resumed verification activities with various safety measures in place”.

The spokesperson said OSCE states used a special system to communicate with each other on inspections and therefore the OSCE was “not in a position to comment on verification activities”.

The inspections are carried out between OSCE members under a 2011 agreement called the “Vienna Document on Confidence- and Security-Building Measures“.

The agreement is intended to promote transparency, including through the notification of military exercises and the exchange of military information.