Latvia: The thriller passes through the central bank 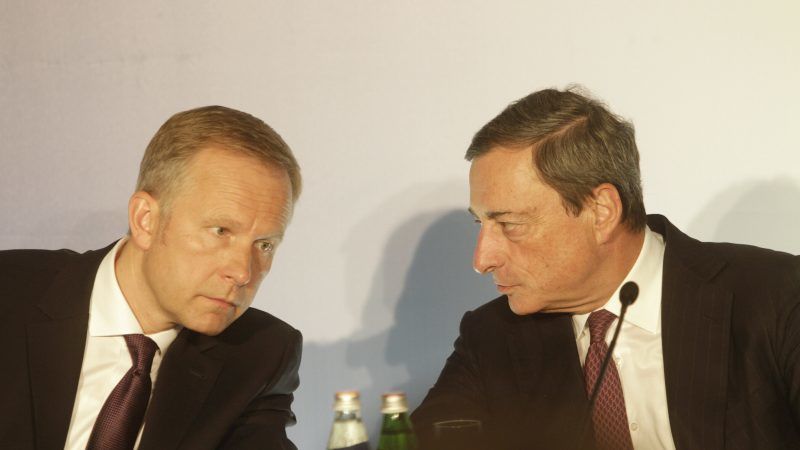 Ilmārs Rimšēvičs, the governor of the central bank of Latvia, here with Mario Draghi. [EPA/VALDA KALNINA]

Murder, wire-tapping in a sauna and bribes: the corruption case involving the central bank of Latvia resembles a real Baltic thriller. EURACTIV France reports with a third article in our series on Latvia.

Mārtiņš Bunkus, a liquidator, was murdered in his Range Rover on 30 May. It even took place within the city of Riga, at 9am in the morning. The murderers, who were clearly veterans, left no trace.

The Latvian police are still unsure about who were the perpetrators of the crime. Angry shareholders in Trasta Komercbanka, where Mr Bunkus was one of the liquidators? Asset holders from the same bank? Made bankrupt in 2016, following a major Russian money laundering and tax evasion scandal, the bank was not one of the cleanest.

Moreover, in late June, the prosecutor announced that Trasta Komercbanka paid the central bank governor, Rimšēvičs, in an attempt to gain favourable treatment from the financial regulatory authority.

The financial authority in question, the FCMC, whose chairman Pēters Putniņš is a close friend of Rimšēvičs, denies any involvement. “There is no problem of this kind. Every administrator adopts decisions with complete autonomy,” the FCMC explained to EURACTIV.

A trip, bribes and negotiations in the sauna

It was through a microphone planted in a sauna that the anti-corruption bureau, the KNAB, came across discussions between Rimšēvičs and an intermediary mentioning bribes in 2013.

The KNAB suspects the governor of having asked the bank for at least €250,000. Trasta Kommercbanka also allegedly financed a trip by governor Rimšēvičs to Kamchatka, at the far eastern end of Russia.

The incident is strangely reminiscent of the American government’s wording in its note concerning another Latvian bank, ABLV, which specified that the bank “is attempting to obstruct the anti-money laundering laws and has used bribes to influence Latvian officials”.

The governor was put under investigation on 30 June, following a series of implausible twists and turns, including the discovery of his empty safe, which was stolen from him in the winter, in a forest.

“He looked right, you saw him at the head of the central bank for many years. And then, as soon as he fell, people started to talk. Even my neighbour assured me that her daughter had acted as an intermediary between Rimšēvičs and a Ukranian bank. It’s disturbing,” said a Latvian journalist.

In the meantime, EURACTIV can confirm that other complaints have been filed against Rimšēvičs, including one by ABLV, which is also in the process of liquidation, and one by Norvik Banka.

“We are in the process of investigating these complaints, which should have separate files,” confirmed the director of the KNAB, Jēkabs Straume, to EURACTIV.

With the scandal of the central banker’s possible corruption, the growing number of money laundering scandals in Latvian banks can be analysed in a different light. It is difficult not to link corruption with money laundering.

“They are two chapters from the same book,” sighed Liene Gatere, the interim executive director at Transparency International in Latvia.

This is a link that the KNAB also recognises. “In order to engage in corruption, you need money, and this money isn’t legal, it has to be laundered, it is in that sense that there is a link,” stated Straume, director of the Latvian corruption prevention and combating bureau.

The KNAB has just moved from a shabby complex far from the centre of Riga to a fancy and pristine new building, just a few steps away from the presidential palace. “It’s proof of the importance the country attaches to the fight against corruption,” assured the director. At least in appearance.

The way that the Latvian court is managing the Rimšēvičs case should say more about its real commitment to fight corruption. This is because the former governor is fighting back. He might explain having worked for the banks officially. “We fear his defence will explain that while it wasn’t ethical, it wasn’t corruption,” said Gatere.

This is a theory that the main shareholder of Norvik Banka, Grigory Guselnikov, considered to be “ridiculous”. The Russian Guselnikov, who is a close friend of Alexei Navalny and therefore anti-Putin, remained appalled by the level of corruption in Latvia.

“Russia is a realm that revolves around Putin, everything goes back to the leader. But it’s different in Latvia, corruption is present at all levels,” assured the Norvik Banka shareholder, who accuses the central banker of having repeatedly asked him for funds, to the point of falling prey to blackmail.

The chairman of Norvik Banka, Oliver Bramwell, explained more soberly that his bank has been subject to inefficient regulations. Indeed, Rimšēvičs threatened to withdraw his approval to Norvik during a press conference in March.

It was an incident that was complicated for its leaders. “We called a board meeting, explained the situation and took the necessary decisions,” assured Bramwell. The bank, where the former NATO general secretary, Anders Fogh Rasmussen, is deputy chairman of AS Norvik Banka Council, is prosecuting Latvia before the international centre for settlement of investment disputes of the World Bank.

Moreover, the former Danish politician has proposed to the Latvian Prime Minister Māris Kučinskis to establish a group of international experts from the European Central Bank and the American Treasury to find a way to restore the credibility of Latvian banks.

“I believe that concrete measures have to be taken to stabilise the Latvian financial system and restore its international reputation,” Rasmussen suggested to Kučinskis in a letter sent on 19 March. It is a proposal that has not been acted on.

Is corruption so common in Latvia that nobody reacts? That is almost the hypothesis of the Council of Europe, whose report “Moneyval” in late August talks of money laundering and terrorist financing in Latvia.

It is a 220 page-long document that is particularly critical of the risk of money laundering in the country, which is assessed as “medium-high”. However, it strangely spares all local officials, even commending the work of the supervisory authorities, including the financial regulatory authority, the FCMC.

“It’s as if we are noting that the number of crimes is increasing while commending the skills of the police!” joked Guselnikov.

One response to “Latvia: The thriller passes through the central bank”