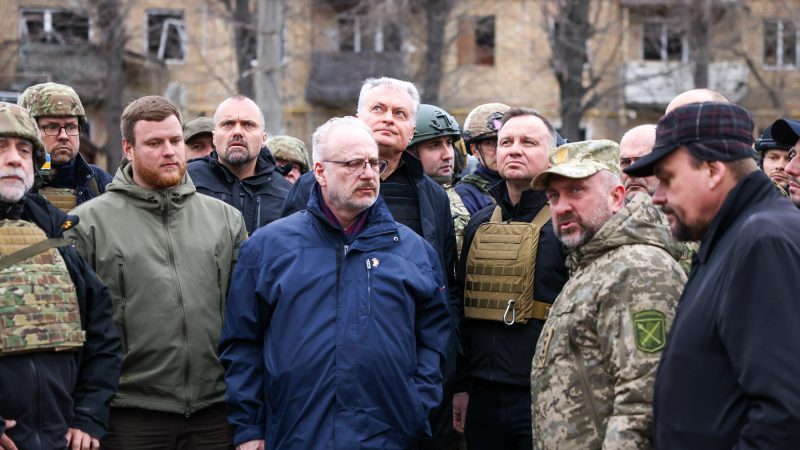 The presidents of Poland, Lithuania, Latvia and Estonia arrived in Kyiv on 13 April 2022. [Twitter account of the office of the President of Poland.]

The presidents of Poland, Lithuania, Latvia and Estonia arrived in Kyiv on Wednesday (13 April) to meet Ukraine’s President Volodymyr Zelenskiy and discuss military assistance, while Russia warned that vehicles transporting weapons on Ukrainian territory would be considered as legitimate military targets.

The four join a growing number of European politicians to visit the Ukrainian capital since Russian forces were driven away from the country’s north earlier this month.

“Heading to Kyiv with a strong message of political support and military assistance,” Lithuanian President Gitanas Nauseda tweeted on Wednesday, along with a picture of the presidents next to a train.

Later Nauseda posted photos of his visit to a battlefield in Dmytrivka and Borodyanka, a town where the Russian army committed atrocities against civilians.

This is where the dark side of humankind has shown its face.

Brutal war crimes committed by the Russian army will not stay unpunished.

War criminals must be prosecuted internationally.

The Polish president’s office also posted on Twitter photos from the visit.

The meeting will focus on ways to assist civilians and the military in Ukraine, as well as with investigations of war crimes, said a spokesperson for Estonian President Alar Karis.

It comes the day after US President Joe Biden said Moscow’s invasion of Ukraine amounted to genocide, while President Vladimir Putin promised Russia would “rhythmically and calmly” continue its operation and achieve its goals.

The four presidents’ offices declined to provide details of the visit for security reasons.

German President Frank-Walter Steinmeier planned to visit Kyiv at the same time “to send a strong signal of European solidarity with Ukraine there,” but was not welcomed by Ukraine, he said on Tuesday.

German Bild newspaper reported that Zelenskiy had rejected Steinmeier’s plans to visit due to his close relations with Russia in recent years and his support for the Nord Stream 2 gas pipeline designed to double the flow of Russian gas to Germany, which has since been suspended.

Germany’s president would have liked to visit Ukraine and the fact that he was not received there was “irritating”, Chancellor Olaf Scholz said on Wednesday.

In the meantime, Russia warned that it will view US and NATO vehicles transporting weapons on Ukrainian territory as legitimate military targets.

Any attempts by the West to inflict significant damage on Russia’s military or its separatist allies in Ukraine will be “harshly suppressed,” Deputy Foreign Minister Sergei Ryabkov told the TASS news agency in an interview on Wednesday.

“We are warning that US-NATO weapons transports across Ukrainian territory will be considered by us as legal military targets,” TASS quoted Ryabkov as saying.

“We are making the Americans and other Westerners understand that attempts to slow down our special operation, to inflict maximum damage on Russian contingents and formations of the DPR and LPR (Donetsk and Luhansk People’s republics) will be harshly suppressed,” he said.

US President Joe Biden’s administration is expected to announce as soon as Wednesday another $750 million in military assistance for Ukraine for its fight against Russian forces, two U.S. officials familiar with the matter told Reuters.

The equipment would be funded using Presidential Drawdown Authority, or PDA, in which the president can authorize the transfer of articles and services from US stocks without congressional approval in response to an emergency.

A senior congressional aide said the equipment to be announced would likely include heavy ground artillery systems to Ukraine, including howitzers.

The White House said last week that it has provided more than $1.7 billion in security assistance to Ukraine since the 24 February invasion of Ukraine that Russia calls a “special military operation”to demilitarise and “denazify” Ukraine. Ukraine and the West say Putin launched an unprovoked war of aggression.